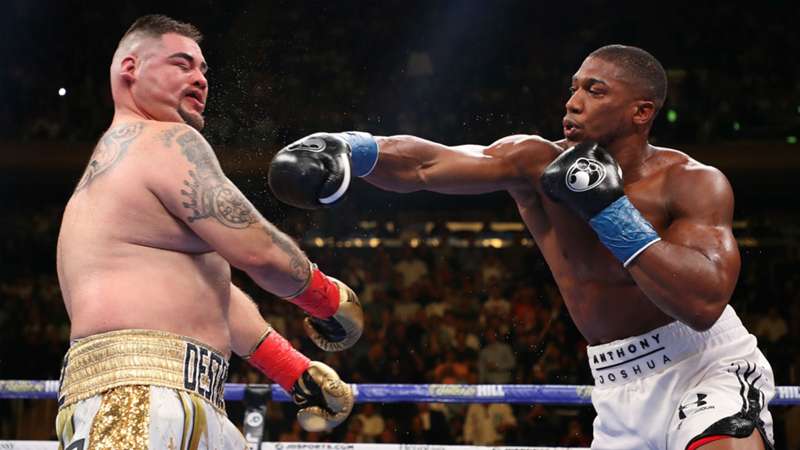 The former unified heavyweight champion of the world detailed his upset loss to Andy Ruiz Jr. — and the lessons he'll take from it going forward.

Two months after suffering the first loss of his professional career, Anthony Joshua can admit he didn't give Andy Ruiz Jr. the proper respect he deserved in his massive upset loss at Madison Square Garden on June 1.

The former unified heavyweight champion of the world recently sat down for an interview with JD Sports, in which he broke down the upset loss to Ruiz. In their interview, AJ said he was already looking to his next fight instead of focusing squarely on his current opponent, who had only stepped in to fight AJ as a replacement opponent for Jarrell "Big Baby" Miller.

Those results — a seventh-round TKO — were certainly shocking to the boxing world, but AJ's breakdown shed some light on his mentality immediately before and during the fight. Joshua said he felt "no pressure" as he entered the ring, but Ruiz's ability to counterpunch and throw combinations made it to where AJ couldn't make quick work of him.

Joshua said after the bell rang following Round 2, he started hearing the crowd booing him. Considering this was his first fight in front of an American audience, Joshua didn't want to disappoint those in the arena — especially after Wilder had delivered a highlight-reel knockout of Dominic Breazele in New York just two weeks prior.

"A deadbeat in New York. The crowd’s booing. And especially two weeks before, Wilder knocked out Breazele in the first round," Joshua said. "I’m fighting two weeks after. So let’s try and handle business. You know what I mean? I don’t want to let the people down. I could cruise this fight."

That mindset was quickly erased after Ruiz rocked Joshua in the third round, catching him in the back of the head with a left hook and scoring a knockdown. From that point on, Joshua said, he was fighting purely on instincts, trying to hold Ruiz off until he got his feet back under him.

That continued with three more knockdowns over the next four rounds, eventually ending with referee Tony Weeks stopping the fight with Joshua standing in his corner, his arms on the ropes. By that point of the fight, Joshua's mouthpiece had fallen out of his mouth. He said he expected Weeks would place it back in his mouth before asking him if he could continue fighting.

"If you haven’t put the gum chew in my mouth and asked if I’m ready to fight, how can you call off a fight when the person isn’t fully … you haven’t given him the chance to fight," Joshua said. "And that was the whole point of it for me. Even though it’s an uphill struggle. I want to always get up and be in his face. I just wanted to get up and stay in as long as I could. I would rather gone out on my back than the referee calling it off."

During his breakdown of the fight, Joshua also admitted he lacked his usual killer instinct against Ruiz. Unlike in his fight against Wladimir Klitschko, which made him the unified heavyweight champion, Joshua said he wasn't mentally prepared to take on Ruiz.

"'I don’t want to be in the ring with Ruiz. They talk about Wilder and (Tyson) Fury,'" Joshua remembered thinking. "This is the road to undisputed, not the road to Ruiz."

Ironically, Joshua's road to reclaiming his heavyweight title now starts with Ruiz. The two are working on a rematch — the date of which has yet to be determined — and Joshua insisted he wouldn't disappoint a second time. Joshua's first loss, which "gained more attention and more meaning from losing than I would have by winning," has motivated him to properly prepare, physically and mentally, for Round 2.

"Everytime I fight it’s going to be on the line now," he said. "It’s deeper than Ruiz Jr.

"I want to unleash the beast."