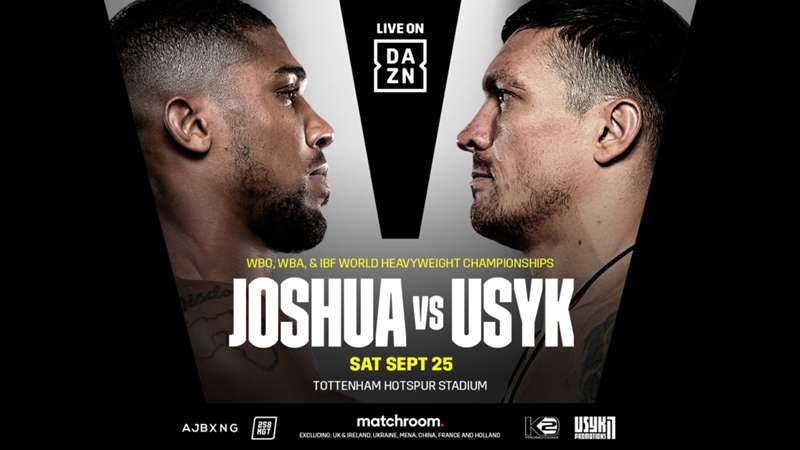 DAZN
Check for Joshua vs. Usyk on DAZN in your region

Three heavyweight belts are up for grabs in Anthony Joshua's first fight of 2021.

The WBA, WBO and IBF heavyweight belts are on the line as Anthony Joshua faces another mandatory opponent.

Joshua was last in action in December 2020 in a successful defence of his three belts against Kubrat Pulev, and has been mandated to face Ukrainian former undisputed cruiserweight champion Oleksandr Usyk.

Usyk's last bout came against Derek Chisora, and he brings an undefeated record into the match-up. Joshua's only defeat came against Andy Ruiz in 2019 before winning back his belts later in the year.

Whoever wins on Saturday will hopes and perhaps even expect to face the winner of Tyson Fury vs. Deontay Wilder for the chance to become undisputed heavyweight champion.

Here's everything you need to know ahead of Anthony Joshua vs. Oleksandr Usyk.

When is Anthony Joshua vs. Oleksandr Usyk? Date, Start time

The Joshua vs. Usyk card takes place on Saturday, September 25. The main card begins at 1 p.m. ET/6 p.m. BST in the UK. They are expected to make their walks to the ring at around 5:10 p.m. ET/10:10 p.m. BST, depending on the outcome of the earlier main card fights.

What channel/stream is Anthony Joshua vs. Oleksandr Usyk?

Sky Sports Box Office will be showing the fight in the UK and can be streamed online as well as on television.

Outside the UK, DAZN have the rights to the fight in 170+ countries. Click here to see if your country is one of them, and click here to find out how to sign up to DAZN.

Where is the Anthony Joshua vs. Oleksandr Usyk Fight?

The card will take place at the Tottenham Hotspur Stadium in London, England. This will be the first time both Joshua and Usyk have fought at Tottenham's new stadium. Joshua last fought Kubrat Pulev at Wembley Arena and Usyk most recently appeared at the very same venue in his last bout against Derek Chisora.