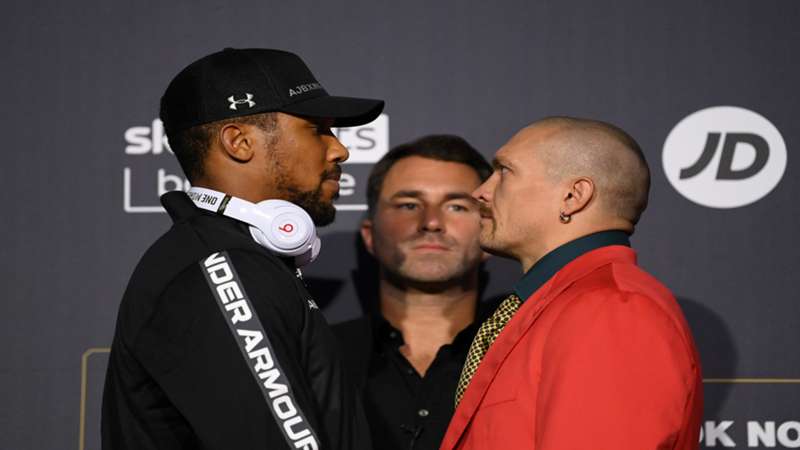 Getty Images
Check for Joshua vs. Usyk on DAZN in your region

The three-belt heavyweight champion is a sizable favorite heading into Saturday's mega clash.

The next major boxing event takes place on Saturday from London, England.

The main event features Anthony Joshua putting his IBF, WBA, and WBO heavyweight titles on the line against Oleksandr Usyk.

Joshua (24-1 22 KOs) makes his 2021 debut after successfully defending his three title belts against Kubrat Pulev in December. It appeared he'd meet fellow Brit, Tyson Fury, to crown the sport's first-ever undisputed heavyweight champion in the four-belt era. But Fury lost his arbitration case with Deontay Wilder and now they will meet for the third time on Oct. 9. Usyk was the mandatory challenger of the WBO and here we are.

After conquering the cruiserweight division by becoming the undisputed champion, Usyk (18-0, 13 KOs) competes for the third time in the land of the giants. In his first two outings, Usyk stopped Chazz Witherspoon and won a decision over Derek Chisora.

It's not surprising that the odds are this high in favor of Joshua.

Usyk isn't a pushover by any means, though. He is a former undisputed cruiserweight champion and a 2012 Olympic gold medalist.  Those accolades alone should give people more belief in Usyk to take down the 6-foot-6 Joshua and move one step closer to becoming the first boxer to win all four major world titles in two different weight classes.

But then Usyk moved up to heavyweight after dispatching Tony Bellew in November 2018 and the perception of the Ukrainian has changed. He struggled to put away late-replacement and lower-level heavyweight Witherspoon in his heavyweight debut. Usyk came back one year later in his sophomore outing to beat Chisora. While Usyk fought better and his used his superior boxing skill to overcome the British heavyweight, at times Chisora's size and power overwhelmed Usyk.

Joshua dazzled in taking care of Pulev. He showed a good jab and used his power to blast through Pulev to earn his second consecutive after getting upset by Andy Ruiz Jr. in June 2019.

Joshua cannot win a pure boxing match. To win, he's going to have get through Usyk's guard and use his power if he wants to continue his second reign as heavyweight champion.

For Usyk to emerge victorious, he's going to have to use his footwork and throw from awkward positions. He did that as a cruiserweight and we've seen what he did there.

Critics say Joshua has been unwilling to stand in the pocket and shown a questionable chin since the first Ruiz bout. He fought a more technical fight in the rematch with Ruiz but took some heavy shots from Pulev and the chin held up well.

Can Usyk bring the power against one of the elite heavyweights and deliver when the lights are shining the brightest?

Joshua has been in plenty of big fights and this is nothing new for him and should be to handle everything Usyk throws his way.

Visions of David Haye and Wladimir Klitschko from 2011 keep running through my head. I can see Usyk taking minimal risks and not being willing to venture on the inside and attempt to inflict damage on Joshua.

A Joshua win via stoppage at +110 is a tempting proposition because who doesn't fancy someone getting knocked out? The best play here, though, is the fight going to a decision and we get a replay of Klitschko-Haye.

Joshua by KO/TKO/Technical decision or DQ: +110

Usyk by KO/TKO/Technical decision or DQ: +550