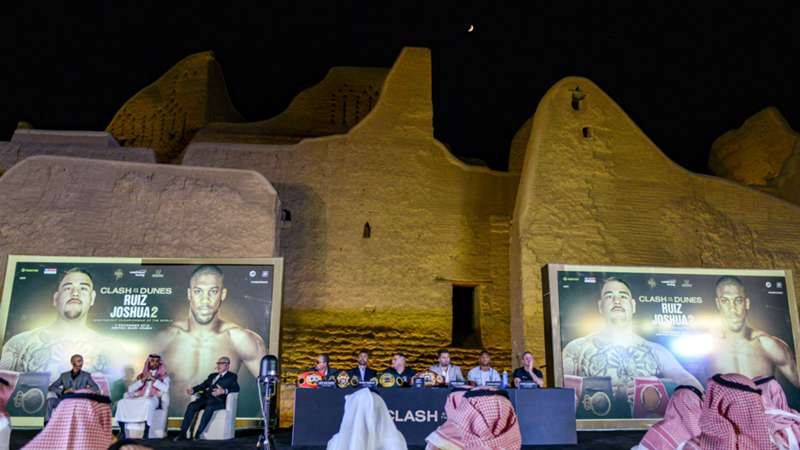 The Matchroom head continues to complain over the Joshua vs. Fury fallout.

Eddie Hearn has said that Saudi Arabia are ‘devastated’ to have missed out on an August date to host the Anthony Joshua vs. Tyson Fury fight.

Joshua and Fury appeared on course to meet this summer to finally settle their wish to become the undisputed heavyweight champion, but ultimately those plans were thrown off course when Deontay Wilder won his arbitration case to force a trilogy rematch.

That is due to go ahead in July, and after the work done by Hearn so far this year to get the fight over the line, he told the DAZN Boxing Show that Saudi Arabian representatives were also disappointed.

“I’m gutted. I think I said before I felt like a one-man army trying to get this fight made, and when you look back the whole thing stinks,” he said.

“When you look back, there was never one positive comment from the other side. I didn’t give up, I knew I could do it. I did as much as I could but I couldn’t control the other side.

“I kept my head down and stayed with it, but unfortunately I took the word of people from people I shouldn’t have.”

Hearn continued that his contact: “Price Khalid [bin Salman Al Saud] who made the [Andy Ruiz] fight happen, was devastated.  I put so much pressure on these people. They didn’t want the fight to be in August . Everyone wanted this fight in December. What they told me was right.

“It’s very disappointing for them. They planned to build a stadium for this. They know us well enough to know we couldn't do any more. Quite frankly I failed on this fight, but I can look at myself in the mirror.”