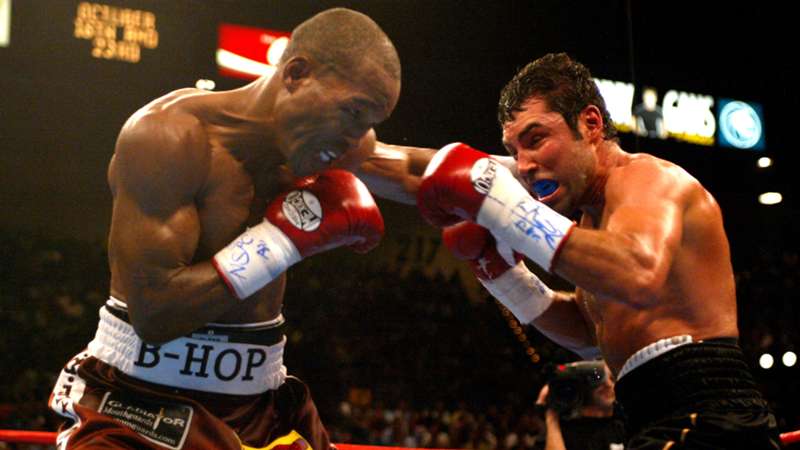 Will the weekend's big unification between Josh Taylor and Jose Ramirez compare to these classics?

Josh Taylor and Jose Ramirez will engage in combat for all four world titles at super-lightweight this weekend. Such fights are an extremely rare occurrence in boxing.

Here, DAZN looks back at some of the fights that had all four major world titles at stake.

Hopkins had ruled at middleweight for a long period, collecting belts regularly as he registered impressive wins over the likes of Felix Trinidad and William Joppy. De La Hoya had only had one fight at 160lbs, controversial points win over Felix Sturm, but it gave him the WBO belt to put on the table with the other three owned by Hopkins.

After eight tactical rounds Hopkins was edging ahead, but he turned the fight massively in his favour in round nine as a well-timed body shot kept De La Hoya down for the count.

The first three bouts all featuring four major world titles on the line featured Bernard Hopkins. After stopping Oscar De La Hoya then outpointing Howard Eastman, Hopkins was opposed by Jermain Taylor. The 2000 Olympian was one of boxing’s rising stars but many within the boxing industry believed his date with “The Executioner” had come too early.

Despite entering the fight as underdog, Taylor tore up the script as he dominated the first half of the fight. Hopkins came on strong, strong enough to convince some people he’d done enough, but the ringside judges favoured Taylor as Hopkins’ incredible middleweight title run came to a shocking end.

Terence Crawford announced himself to the world in 2014 when he became world lightweight champion by defeating Ricky Burns. The following year, Crawford had moved up to 140lbs and added to his growing profile by winning world titles against Thomas Dulorme and Viktor Postol. Julius Indongo was the only man preventing him from becoming undisputed ruler.

The pair met in Nebraska, Crawford’s home state, in 2017 and it was clear from the early stages who the world’s premier super-lightweight was. Crawford dominated from the outset and a stunning body shot in round number three gave “Bud” every world title in his weight class in front of his adoring public.

When the World Boxing Super Series announced their cruiserweight series in 2017, the one fight that made fight fans salivate was Oleksandr Usyk against Murat Gassiev. The pair dealt with their respective opponents throughout the tournament and the dream final that everyone wanted was now a reality.

With people seemingly split on the outcome, Usyk made a mockery of those pre-fight prophecies as he dominated the bout from the early stages. His excellent jab combined with fluid movement frustrated Gassiev for long periods and at the end of 12 rounds, Usyk took all the belts home to Ukraine.

After acquiring all four belts against Murat Gassiev, Oleksandr Usyk would make his maiden defence against Tony Bellew. The Liverpool fighter, a former WBC cruiserweight champion, had been campaigning at heavyweight in a fierce rivalry with David Haye. When it became clear that Usyk wanted to face him, Bellew jumped at the idea.

After making a solid start against the Ukranian, Bellew began to slow down by the midway point due to his stellar efforts in the fight’s early rounds. Usyk began to take control and in round eight, a well-timed left hand put Bellew on the canvas prompting the referee to stop his count, and the fight.