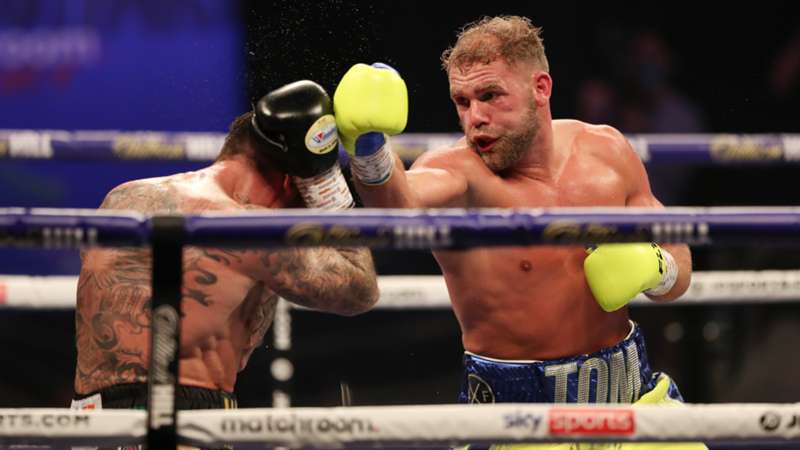 (Mark Robinson/Matchroom)
Watch Canelo vs Saunders on DAZN (except Mexico)

The WBO super-middleweight champion thinks his fellow countryman didn't give himself the best chance to win against Canelo Alvarez.

Billy Joe Saunders gets the big fight he's been waiting for as he takes on Canelo Alvarez in a super-middleweight title unification bout on Saturday from AT&T Stadium in Arlington, Texas, on DAZN (excluding Mexico).

Saunders will be the second Englishman Alvarez faces in his three most recent fights. Six days before Christmas, Alvarez dominated Callum Smith to win the WBA and WBC super-middleweight titles to become a four-division world champion.

The WBO super-middleweight titlist is of the mentality Smith shouldn't have taken the fight on five weeks' notice and should've given himself more time to prepare for the guy many feel is the top pound-for-pound fighter in the sport. Saunders feels Smith took the fight on short notice for one reason only.

"You know, and I can only go and think he got offered a hell of a lot of money, and I think he was probably put in the same position as me," Saunders said on DAZN's "Off The Cuff." "And he took the money route.

"My opinion, I don't think he was at his best. I'm not taking anything away from Canelo, but when you box someone like him, you need two months to get your head around everything what comes with that. Because if you think you're gonna take it on five weeks' notice, next thing you know, your bags are packed, you're on the plane, you're over there, you're [doing] media, you're this, you're in the ring, the lights are on, you don't know what's happening. No, no, no. That's not proper preparation.

"And I don't care if they say he stays in the gym, he stays fit. Mentally, that's, you know, you need that mental side of things to get your head around this full situation, not just be blinded by money put in front of you. Because I believe that's what happened to him. I believe he went in there for the money, rather than the destiny of actually being the man to dethrone Canelo. Because he's a good fighter, Smith, and I just don't think that was his night, definitely not."

In preparation for Alvarez, Saunders (30-0, 14 KOs) didn't bother watching too much of Alvarez-Smith. Why, might you ask? Because Saunders felt right away that Smith had the wrong game plan to get the job done.

"I can give you my opinion of what I think happened," Saunders said. "But I can't really give you my full opinion of the fight because I'll be honest with you – I've only watched the highlights, and I've only watched about two minutes of it and turned it off because I rate Callum Smith as a fighter. But I think he went in there depending on power and size, and that don't work. Game plan completely wrong, fought completely wrong."