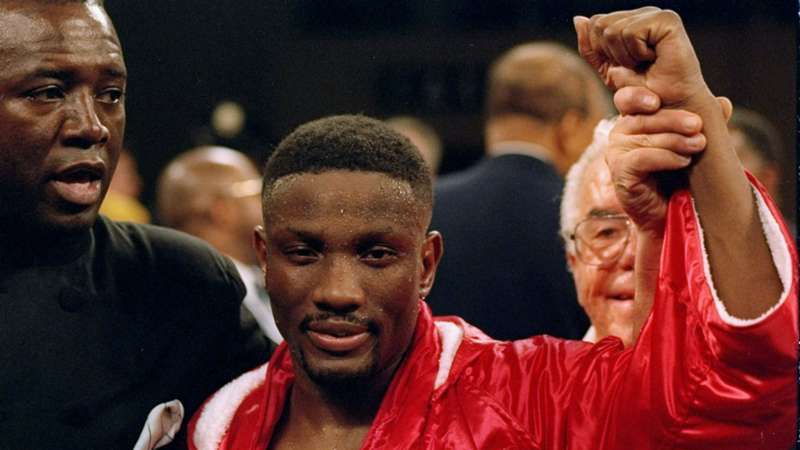 Upon hearing the tragic news that Pernell Whitaker died after being struck by a vehicle while crossing the street in Virginia Beach on Sunday, members of the boxing community paid tribute to the legend known as "Sweet Pea."

Here are some of their reactions:

I'm deeply saddened by the loss of this great champion, who gave a tremendous amount of joy to those who watched him. #PernellWhitaker pic.twitter.com/IZv3IQOo2f

It was an honor to share the ring with him. In terms of his defense and ring generalship, Pernell Whitaker was the best fighter that I ever fought. On behalf of everyone at Golden Boy, we send our prayers and condolences to his family and friends. pic.twitter.com/sa4qZIDIIG

I’m truly lost for words to hear Pernell “Sweet Pea” Whitaker is no longer with us. He was a flawless fighter. Condolences to his family. pic.twitter.com/pZZEceN7h2

One of the greatest boxers of my lifetime and my good friend Pernell “Sweet Pea” Whitaker passed away last night. During his long and successful career I never missed one of his fights. To me, he was one of the top five greatest boxers ever!

Pernell “Sweet Pea” Whitaker was in the class of Muhammad Ali and Sugar Ray Leonard as one of the most entertaining fighters in my lifetime. I’m praying for his family during this difficult time. Rest in Peace my friend. 🙏🏾

Wow I can’t believe this!!! Somebody that I’ve always loved to watch and wanted to meet so bad and now it will never happen. SMH RIP SWEET PEA you will for ever be one of the greatest to ever lace em up.

I am saddened to learn of my good friend and Olympic teammate Pernell Whitaker's untimely passing last night.
We share so many great memories. He was small in statue but yet so big in heart and skills inside the ring, there will never be another like him, he will truly be missed pic.twitter.com/IqmXkqpqkG

May you Rest In Peace.. Pernell “Sweet Pea” Whitaker! Thank you for inspiring me and all the future champions to do the sport that we love. #GoneButNeverForgotten

Oh no, no, no... Sweet Pea was one of the greatest fighters to ever lace up gloves. Waking up to this news just has me GUTTED. #Boxing has lost one of its best and I’ve lost a friend. Loved him. No matter what he was going through, Pete had a great heart. #ripsweetpea pic.twitter.com/un90hPmIO6

On my NY public access TV show “Max on Boxing” (1989-1998), I talked Pernell Whitaker more than any other fighter; it was basically the Pernell Whitaker show. He was the pound for pound best for half a decade, and one of the 3 greatest pure boxers who ever lived. RIP Sweet Pea.

The thing about Sweet Pea was that he was the antithesis of Mike Tyson in the boxing ring. Where Tyson was a savage wrecking ball, Whitaker was smooth and an untouchable thief in the night.

We have just received the sad news informing us that Pernell Whitaker has passed.

"Sweet Pea" was one of the most brilliant boxers in the past decades and he was always a great friend of the WBC.

We are deeply saddened with this new; May the legend rest in eternal peace. pic.twitter.com/Zsgqa66FKF

When Pernell Whitaker was world champion from lightweight to light middleweight, he was something special. In my Top 2 fave fighters. I could watch hours and hours of him. Glad I got to sit next to him at the Ward v Kovalev fight in Las Vegas. R.I.P. 🙏🏽 pic.twitter.com/56T1ueHiLh

Very sad to hear the news about Pernell Whitaker today.

This man was one of the greatest boxers ever to lace up gloves, loved watching him growing, defensive savant and as brave as they come. This is insanely sad. https://t.co/OzPUCeBmgK