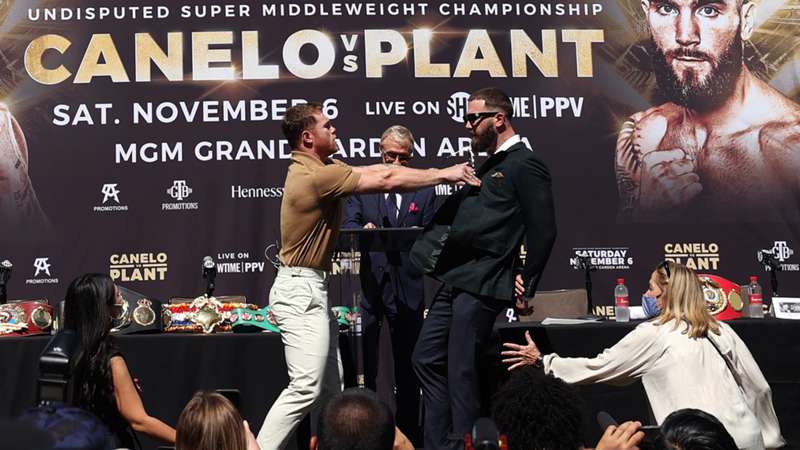 GettyImages
Explore other fights on DAZN EXPLORE OTHER EVENTS ON DAZN

The press conference scrap between the two back in September can tell us a lot about each fighter heading into Saturday's showdown, according to an expert.

When Canelo Alvarez and Caleb Plant stood face-to-face during their press conference on Sept. 21, words were exchanged, tempers flared and the Mexican superstar shoved the American across the Beverly Hilton — The Wilshire Garden stage in Los Angeles.

Plant collected himself, sauntered across that same platform and literally slapped 'the face of boxing', to which Alvarez responded with a light two-piece.

These kind of scuffles happen at times in boxing. They’ll meet again during this fight week events leading up to their clash Saturday night to declare the first undisputed super middleweight champion in boxing history.

The question is did that fracas back in September provide us with more symbolic offerings than meets the eye? DAZN approached body language expert Blanca Cobb looking for answers.

Cobb, who has shared her expertise with CNN, Good Morning America and USA Today, reviewed footage from the Canelo-Plant faceoff and came away with distinct body language observations from the moment the conference started all the way to the heated scrap.

“Caleb is coming out and looking down,” Cobb told DAZN. “He’s shuffling his shoulders and shifting his weight a little bit.”

Meanwhile, she noted that “Canelo is walking up on stage, looking at the crowd and ignoring Caleb.”

Cobb additionally noted that when Alvarez was announced that Plant noticeably showed “contempt.”

“There was some disdain there.”

When the unified super middleweight champion and IBF 168-pound titleholder walked across the stage to meet face-to-face for an intense moment, Cobb made other observations.

“Canelo is solid, Caleb is swaying just a little bit,” Cobb said. “If Canelo is feeling any type of angst or anxiety, he’s not showing it. Whereas Caleb has the tight lips.

“He’s drawing his lips in,” she added about Plant. “When you tighten them, there’s something that’s bothering you.

“[Plant’s] not a good poker player. On this stage, you can read his emotion.”

When the boxing superstar shoved Plant across the stage, Cobb observed his “neck strain,” which told her that Canelo “means it.”

All in all, when the fray erupted and eventually was extinguished, Cobb was left with the following:

How, if in any way, that pans out Saturday night remains to be seen.