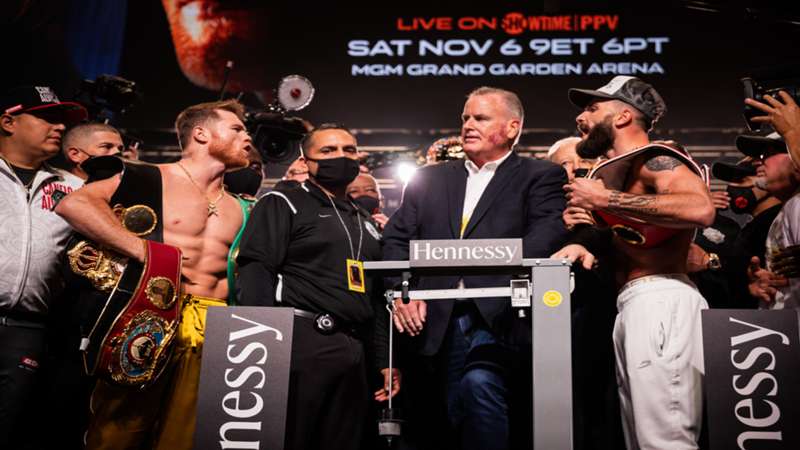 Canelo Alvarez and Caleb Plant get one final look at each other before fight night.

LAS VEGAS — Canelo Alvarez and Caleb Plant have made it clear heading into Saturday's undisputed super-middleweight title fight they respect each but won't be hanging out with one another.

Before Alvarez and Plant settle their score in the ring to determine the first four-belt champion at 168 pounds, they tipped the scales to make the fight official.  There wasn't much drama in that nature as Alvarez came in at the super-middleweight limit at 168 pounds while Plant was one pound lower at 167.

The big question coming into the weigh-in was whether they would face-off as they didn't at Wednesday press conference of the physical confrontation at the introductory presser back in September.

It did happen, kind of. Plant was awaiting Alvarez. The Mexican star made his way towards Plant but the head of the Nevada State Athletic Commission Bob Bennett grabbed Alvarez's left arm and attempted to pull him away. Despite that, Alvarez and Plant were close enough to hurl comments at one another with the crowd roaring for Canelo before more security came in.

"It’s time. He will feel something different,"  Alvarez said after the weigh-in. "Believe me.

"Like I said before, for every action, there’s a reaction."

Here is what happened at the Canelo vs. Plant weigh-in.

facebook twitter whatsapp
It is time for Canelo Alvarez and Caleb Plant to make their way to scale.

Plant comes out to a loud set of boos. He holds an ear to let the fans know he hears them. Next, comes boxing's pound-for-pound king to an unbelievable reaction.

Plant is first to the scale and comes in at 167 pounds. Alvarez is next and tips the scales at 168 pounds.

After both guys made weight, Plant walked up and Alvarez came next. Security wouldn't let Alvarez go all the way up to Plant.

That didn't stop neither guy as they exchanged words back and forth for about a minute before they were pulled away.

Co-main event is locked in

Coming to the stage are super-middleweights Anthony Dirrell and Marcos Hernandez.

Hernandez is first and comes in at 168.5 pounds. Dirrell, a former two-time super-middleweight champion, to a chorus of boss is also 168.5 pounds.

Baez is first and weighs 126.5 pounds. Vargas, the former WBC super bantamweight champion, is up next and comes in at a cut 125 pounds.

First set of fighters are making their way to the scale with super lightweights Juan Pablo Romero and Elvis Rodriguez.

facebook twitter whatsapp
Welcome to DAZN News' live coverage of the Canelo Alvarez vs. Caleb Plant weigh-in. What can we expect between the two super-middleweight champions? We are about to find out.