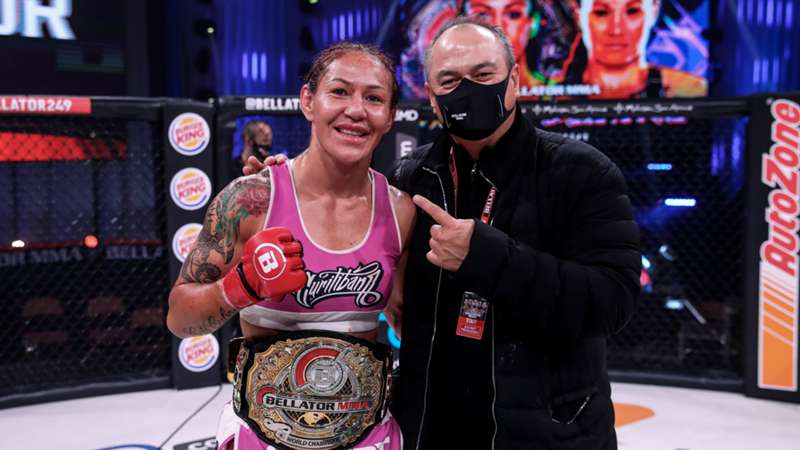 Could we see a Boxing vs. MMA super fight?

Cris Cyborg was at Madison Square Garden on Saturday, April 30, when Katie Taylor and Amanda Serrano had the most significant fight in women's boxing history. Taylor and Serrano duked it out for ten rounds, with the former winning a split decision.

Cyborg, the reigning Bellator women's featherweight champion, makes her pro boxing debut on Sunday as she takes on Simone Silva in her native Brazil. Seeing Taylor and Serrano make history made Cyborg want to be a part of events like that.

"This fight is the biggest fight in women’s boxing history, and I went to support that," Cyborg told DAZN. "I needed to be there for support. Team Serrano invited me to be there. The crowd was crazy and amazing. It was Puerto Rican and Irish people. It made me really happy because woman's boxing really deserved that. And then I hope that next year I have a lot of big fights like that."

Before Taylor vs. Karen Carabajal was formally announced earlier this week for Oct. 29, Eddie Hearn talked about the possibility of making Taylor vs. Cyborg. The only woman to win world titles in four major MMA organizations admits talks have taken place in the past.

But Cyborg is only focused on Silva, and if the Taylor fight comes to fruition, then it would be a privilege to share the ring with her.

"Katie Taylor, our teams have talked about this fight maybe happening in the future," Cyborg said. "It is an honor for me when they call me out. I have much respect for Katie Taylor, and her history, and everything she’s done for women’s boxing.

"I have one thing on my mind. I want to finish my career doing the biggest fights for my career and for my fans before I retire. I just focus on this fight now. One excellent step for me (is) going to be maybe Katie Taylor. It would be an honor for me. I'm going to work really hard. I respect boxing. I’m going to do my all in training for a great fight."

Boxing is something Cyborg's always wanted to do. The timing was just an issue. The stars have finally aligned, and she's ready to go.

"I feel very blessed for the opportunity to do this boxing fight," Cyborg said. "This is one of my dreams, and I'm happy, and I'm very thankful for this fight. It’s going to be so special because I never thought I was going to fight in boxing. I never thought about growing up in Brazil, so it's going be an amazing opportunity back to go to Curitiba, same as my first fight in the UFC is going to be my first fight."