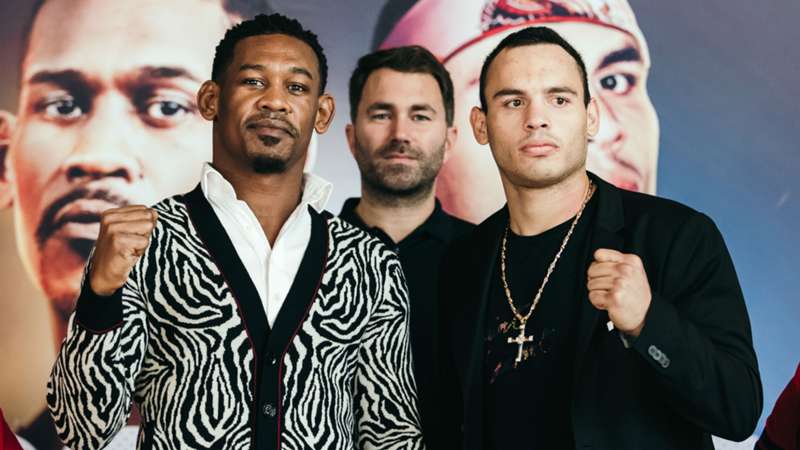 The "Miracle Man" looks to make a solid first impression at 168 pounds.

The "Miracle Man" is back.

After being edged in a unanimous decision loss to Saul "Canelo" Alvarez in May, Daniel Jacobs will move up in weight and return to the ring to face Julio Cesar Chavez Jr. in a super middleweight bout. The 168-pound clash will take place Friday, Dec. 20 at the Talking Stick Resort Arena in Phoenix, and live on DAZN.

Jacobs (35-3 29 KOs) got busy a little too late against Alvarez, and that cost him the IBF middleweight title back in May. However, the "Miracle Man" feels a renewed sense of urgency entering the super middleweight ranks, as he looks to put the division on instant notice with a strong showing against Chavez Jr.

“I am thrilled to be making my debut at super middleweight on December 20 against Julio Cesar Chavez,” said Jacobs in a press release statement. “I’ve achieved a dream of becoming a world champion at middleweight, and now I am seeking to secure my legacy by becoming a two-weight world champion.

"There are some great fighters and champions at 168 pounds, and I believe that I will be a different beast up at super middleweight," he continued. "Facing Julio is a great test for my first fight. He’s a former middleweight champion like me and he has the same goal as I do. Julio is always in great fights, and I am sure that our styles will gel to be a thriller for the fans. And I plan to announce my arrival at 168 pounds in style.”

Chavez Jr. (51-3-1-1 no contest) is coming off a first-round knockout of Evert Bravo in August. Prior to that, he — like Jacobs — suffered a unanimous decision loss to Canelo. The son of boxing legend Julio Cesar Chavez believes a win over a respected, battle-tested veteran like Jacobs would do wonders for him.

“Going against Daniel Jacobs is the perfect fight for me because there is so much on the line,” Chavez Jr. said. “A victory gets me one step closer to a world championship, and I’m not going to let anyone stand in my way. I know that Danny Jacobs is a former world champion and is a strong fighter with very good boxing skills. Those are the kind of boxers that bring out the best in me. I’ve been working hard in the gym and can’t wait to let everyone see what I’ve been working on. I’m very motivated to get the win, and at the end of the night I will have my hand raised in victory. I ask my fans to believe in me. I will deliver.”

The winner of this bout hopes to set himself up for a super middleweight world title shot next.