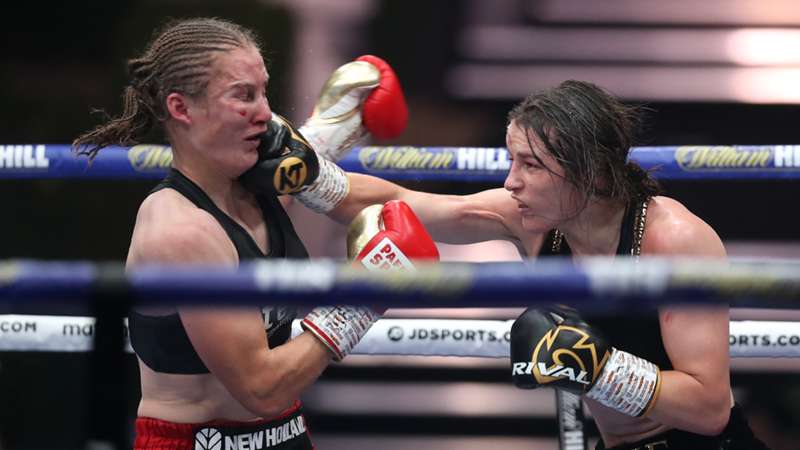 Who makes the top spot?

Women's professional boxing has evolved into an exciting scene over recent years, with several key names helping to lead the charge towards bigger and better things.

With that in mind, we present to you our first instalment of a feature that will be revised and updated monthly, as we rank the 10 biggest names in the game across all weight classes.

Several different forms of criteria were considered here, including overall record, quality of wins, quality of opposition and how active a fighter has been/is being. Even then, it's safe to say that there were some very close calls and some tough decisions had to be made.

The darling of Irish boxing, Katie Taylor has cemented her place at the top of the rankings with victory over former amateur rival, Natasha Jonas, earlier this year. Taylor defends her world titles at Headingley Stadium against Jennifer Han on September 4th.

Still on the list despite her recent flirtation with MMA, Claressa Shields is unfortunate to miss out on top spot. If the self-proclaimed “GWOAT” wishes to return to boxing soon then it’s likely that a victory over a top name could propel her to number one.

A high ranking for the Brooklyn-based Puerto Rican who started 2021 with a ninth-round win over Daniela Bermudez. Serrano faces Yamileth Mercado in August before setting her sights on a potential Katie Taylor fight.

After gate-crashing the rankings last year with a brilliant win over Cecilia Braekhus, Jessica McCaskill solidified her position as one of the world’s best fighters by repeating the result in March. The Chicago star has no fight lined up at the moment but she’ll be desperate to build on her impressive form.

Estrada is enjoying 2021 and the East LA fighter has aspirations to have a big future too. After finishing 2020 with the fastest knockout in female boxing history, Estrada has moved on to become world champion. With her record currently standing at 21-0, the Californian star possesses one of the sport’s most impressive ledgers.

After securing her first world title last year by defeating Ewa Brodnicka, Mikaela Mayer fulfilled the potential that had long been predicted for her. After defending her belt against Erica Farias in June, Mayar will be hopeful that her maiden title defence will be the first of many as she targets bigger challenges.

After losing her world crown to Jessica McCaskill last year, Cecilia Braekhus will be eager to prove that she still has world class credentials. You have to go back to 2008 for the last time the Norwegian star wasn’t a world champion, so it wouldn’t be wise to dismiss her chances of securing another shot in the near future.

Perhaps more widely known for her two losses to Katie Taylor, Delfine Persoon can consider herself unfortunate not to be higher up this list due to the closeness of her bouts with her Irish rival. Will she ever get the chance to face Taylor again?

After making her debut on the huge Floyd Mayweather vs. Conor McGregor event, Savannah Marshall has had to be patient for similar opportunities since. The talented Brit became world champion against Hannah Rankin in 2020 and she’s desperate to test herself against Claressa Shields in 2022.

Despite losing her professional debut to Claressa Shields back in 2016, Crews-Dezurn hasn’t looked back since. Her world title win over Maricela Cornejo in 2019 was well deserved and she’ll want to add further honours moving forward.