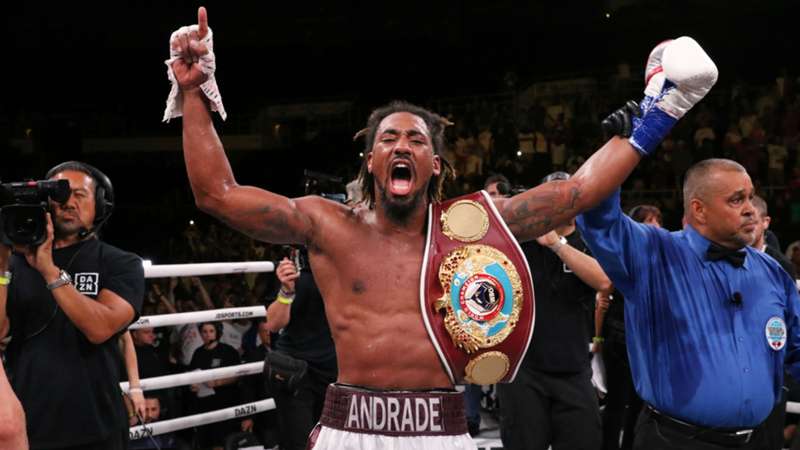 Demetrius Andrade marches forward in pursuit of a big opportunity.

Part of the basis of the movie, "Willy Wonka and the Chocolate Factory", was who would be one of five children to uncover the golden ticket and take a tour of Willy Wonka's mysterious chocolate factory. The 1971 hit is the story of Demetrius Andrade's reign as WBO middleweight champion as he looks to defend the belt for the fifth time on Friday evening against Jason Quigley from the SNHU Arena in Manchester, N.H., which you can watch exclusively on DAZN.

Andrade (30-0, 18 KOs) checks every box when looking for a star. He's a former Olympian, charismatic, good-looking, and the most important thing than all of those, the native of Rhode Island can fight. But why have the notable fighters who currently or have competed at middleweight like Canelo Alvarez, Gennadiy Golovkin, Jermall Charlo, and Billy Joe Saunders been reluctant to share the squared circle with Andrade? After Canelo (57-1-2, 39 KOs) dispatched Saunders to win the WBO super-middleweight title, Andrade crashed the presser in hopes of getting under his skin to make the fight. Instead, Canelo laughed it off and told him he hadn't fought anybody while Andrade countered by saying the pound-for-pound king had avoided him.

Golovkin (41-1-1, 36 KOs) has never expressed why he wouldn't entertain a bout. Andrade was supposed to face Saunders in October 2018, but the Englishman tested positive for a banned substance and was subsequently pulled from the fight. Talks were revised for them to meet for Saunders' 168-pound belt at the time, but they never crossed the finish line. When asked about future opponents before his win over Gabe Rosado, Jaime Munguia (38-0, 30 KOs) never mentioned Andrade's name to DAZN News despite being the No. 1 contender. Then there's Charlo (32-0, 22 KOs), where a substantial offer was made from Andrade's promoter Eddie Hearn, and it was rebuffed.

Most would get frustrated for not securing the opportunities they feel are deserved. Not Andrade. "Boo-Boo" knows himself and Hearn have done everything they can to ensure a megafight to show the boxing world he belongs in the conversation among the upper echelon of the sport.

"I'm not going to sit there and drive myself crazy, emotionally be upside down because I'm not getting these other name guys," Andrade told DAZN News. "As long as I'm in the ring, I'm staying active. (I) can't get paid unless I fight, and that's the biggest thing. I take care of my family. I'm doing what I got to do, and I'm still keeping the ball rolling. And at one point in time, they're going to have to want to be like, ‘We need to force this thing to happen’. If it doesn't, then at least I can say I went to everybody's door and tried to make it happen. There is a real boogeyman."

Out of those five names, there's one that bothers Andrade more than the rest because he's an American with an undefeated record who also holds onto a 160-pound title which makes the 33-year-old feel it's the most significant matchup of them all.

"Because for one thing, like Eddie Hearn says, 'Two American undefeated fighters, why not'? I think that fight is bigger than the Canelo fight, honestly. Canelo got the fan base, but that's like the biggest fight, Charlo versus Andrade. Demetrius Andrade versus GGG is good. Canelo- Andrade is really good. But Charlo vs. Andrade, I think is really big."

Physical preparation is essential when the battle is approaching. But the mental aspect is an attribute highly understated. Yes, Andrade could have taken Quigley lightly and underestimated Liam Williams in April because he didn't open up the golden ticket to Charlo, Canelo, GGG, Munguia, or Saunders. But, that mindset isn't in Andrade's DNA and never will be.

"Because (of) the bigger picture and who I am and the drive," Andrade said. "What I have inside at the end of the day, he's trying to take what’s mine. He's trying to take everything that I worked hard for. No matter what his ability or his level is to other people, for him to be in the ring with me has to be somewhat good. He's trying to take what’s mine. Anything can happen any given night. I got to be on top of my game, and then how does that prove that I am looking to be one of the best or the boogeyman if I lack in preparation because I'm not getting the names I'm looking to get."