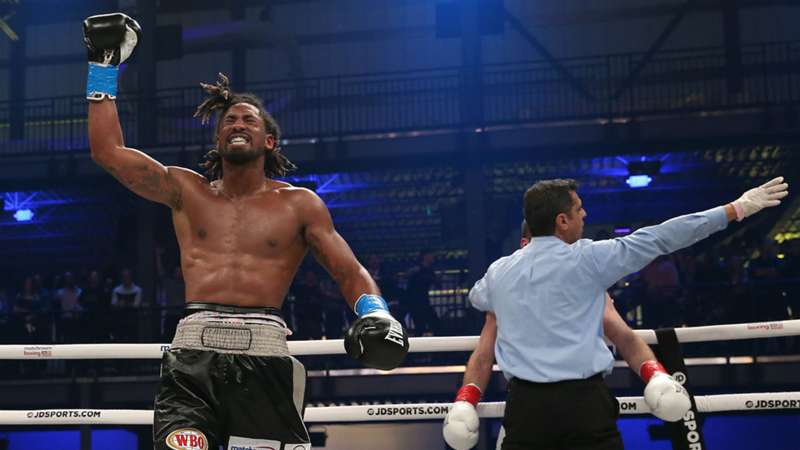 It was as if Demetrius Andrade was trying to one up Jake Paul on Thursday night.

After Paul destroyed AnEson Gib via a first-round TKO in the co-main event, Andrade uncorked a left hand and dropped Keeler instantly in the first round of the main event. The WBO middleweight champion unleashed an overhand left that dropped Keeler in the second round as well.

Although Andrade wouldn't get as quick of a result as Paul did, "Boo Boo" did eventually record a ninth-round TKO to defend his title for the third straight time before an excited crowd at the Meridian at Island Gardens in Miami.

The end came when Andrade pummeled Keeler with a barrage of punches until the ref stepped in to end the punishment.

Andrade and Saunders were slated to fight back in October 2018, but Saunders failed a drug test, and that erased any chance of the bout happening at the time.

Andrade begs to see better boxing competition, considering how easily he dispatched Keeler on Thursday night. After scoring two knockdowns during the first two rounds, Andrade proceeded to completely demoralize Keeler, peppering him with shots at will and literally boxing circles around him in an all-around dominant display.

While Andrade abandoned his home-run hitting attempts during the middle rounds, he returned to the heavy artillery in the ninth, where he unleashed a barrage of mostly unanswered punches that led to the TKO in yet another sound boxing display.

Round 9: Andrade is all over Keeler, landing shots at will. And he's pouring it on. He has Keeler wobbled and badly hurt, as the onslaught continues. He's pounding away at Keeler — and that's it. The ref steps in and stops it during the waning seconds of the round as Andrade makes his third title defense. Andrade buckled Keeler's knees with a left and then added a right uppercut that did damage moments later. He was laying on the punches with Keeler against the ropes before it was waved off.

Round 8: The champ's outclassing of his challenger continues. He's just far too superior of a boxer and it shows, as Andrade methodically breaks Keeler down. (10-9 Andrade, 80-70 Andrade)

Round 7: Andrade is standing right in front of Keeler, daring the Irish fighter to do something. When Keeler throws a punch, Andrade peppers him with counterpunches. He lands a stiff shot right at the bell. A demoralizing round for Keeler. (10-9 Andrade, 70-61 Andrade)

Round 6: Keeler coming forward and landing a few shots in probably his best moment of the fight. Andrade now with a clean left and then goes to the body. Andrade is making Keeler miss and miss and miss some more, while counterpunching to add insult to this boxing schooling. (10-9 Andrade, 60-52 Andrade)

Round 5: Andrade catches Keeler off balance with a right and then loads up on another right to wobble the Irish fighter. He's just smothering Keeler. Give Keeler credit, he's still hanging around, but is completely outclassed. (10-9 Andrade, 50-43 Andrade)

Round 4: Andrade is lunging forward with that sweeping left hand, really trying to get Keeler out of there. Keeler is trying to stay close to the champ's chest and land some shots of his own, but Andrade creates the real estate needed to punish the challenger some more. He brushes him back with a right hand to the body before the bell rings. (10-9 Andrade, 40-34 Andrade)

12:30 a.m.: It honestly just feels like a matter of time before the champ ends this. Let's see if Andrade could secure the stoppage.

Round 3: The champ is just chopping away at Keeler by loading up on that left hook. Now, he mixes in a left uppercut and lands a straight left seconds later. (10-9 Andrade, 30-25 Andrade)

Round 2: Andrade with a stiff left hand early in the second. Moments later, he adds a right hook. Andrade brushes Keeler back with a left hook. The champ is measuring Keeler up, seemingly looking for that home run hit. "Boo Boo" just teeing off on Keeler by touching him with the right jab and coming across hard with lefts. Andrade crushes Keeler with an overhand left. Boom! Keeler's down in a heap!

Keeler gets up at nine. And now he gets pushed down — not a knockdown. Andrade sends Keeler crashing to the ropes with a big left hand now. Wow. Major firepower from the champ early on. (10-8 Andrade)

12:20 a.m.: Both fighters have been introduced, and there's the bell. This fight is underway.

12:15 a.m.: The champ is here. Undefeated WBO middleweight titleholder Demetrius Andrade donning a Darth Vader mask and looking to make his third defense of the strap.

12:13 a.m.: Luke Keeler just made his way into the ring in his U.S. debut and easily the biggest fight of his career.

12:10 a.m.: Michael Buffer takes the mic and leads into an eight-bell toll in memory of the late Kobe Bryant.

12:05 a.m.: Paul and KSI just had a heated confrontation in the ring, with "The Problem Child" promising "you're next" and declaring that "I'm (the) A-side," which threw KSI into a frenzy. KSI said "I'm going to f— you up." Of course, Paul wants to avenge the loss that his brother, Logan Paul, suffered at the hands of KSI last November.

12:00 a.m.: Paul immediately got up on the ring ropes and had some words for KSI, who just witnessed his friend, Gib, get destroyed.

11:54 p.m.: Gib is about as awkward as you'll ever see a boxer. He's crouching and getting awfully low in attempt to move forward. Paul clips Gib with a right hand and scores a flash knockdown. Seconds later, it's another knockdown! Gib is in all kinds of trouble. Paul lands a big right hand that hurts Gib. And another right hand and Gib is down. The ref waves off the fight. It's over. Three knockdowns for the quick TKO. The most-viewed internet star in the United States just gave his followers something to go crazy about.

. @JakePaul was too much too handle for AnEsonGib #PaulvsGib pic.twitter.com/bAsLTvQNjV

11:40 p.m.: Check out our Jake Paul vs. AnEsonGib live blog for updates and fight highlights .

11:30 p.m.: An elated Diaz fully expects and wants to run it back with Farmer for a rematch. Farmer says he badly hurt his right hand, but doesn't make any excuses and gives credit to Diaz. We've seen two new world champs be crowned on this main card thus far. Can Luke Keeler make it three?

11:24 p.m.: Both continue to slug it out until the final bell, when Diaz lets out a war cry. Diaz was just the hungrier, more aggressive fighter. Judges should have him winning in a landslide. And kudos to Diaz's cutman for keeping that nasty gash under control.

11:20 p.m.: Farmer's corner just told him that he's going to lose if he doesn't do something big in this 12th and final round.

11:15 p.m.: "Jo Jo" Diaz is in complete control entering the 11th round. He has taken it to the champ and is two rounds away from snatching the IBF title. Farmer just doesn't seem like his slick, boxing self. He looks tired with little head movement.

11:11 p.m.: DAZN just announced that an amazing 43 percent of this bout has been fought on the inside, including this entire ninth round. But Diaz keeps getting the better of Farmer during these sequences and could very well walk away as the winner and new world champ because of it. Diaz's cut hasn't been much of a factor the last couple of rounds.

11:09 p.m.: Farmer is being outworked through eight. He engaged in a firefight, phone booth style, but Diaz walked out of it having landed the better shots. Farmer is going to need to let his hands go over the next few rounds to keep his title.

11:00 p.m.: Both fighters having to endure obstacles here, entering the second half of this bout, as Farmer is still laboring his right hand and Diaz has that cut to deal with. Farmer's corner called for him to get more aggressive, as they think this bout is a little too close for the champ right now.

10:55 p.m.: Diaz holding his own very well despite having to endure that bad gash.

We've got him up three rounds to two through five. Farmer did land some slick and stiff counterpunches during that fifth round.

10:43 p.m.: Farmer opened up a bad cut over Diaz's left eye in that second round. The instant replay shows that an unintentional headbutt caused the deep cut. Diaz cleared to continue after the ref makes the ring doctor check it out during the early seconds of the third round.

10:40 p.m.: Tevin Farmer told his corner that he hurt his right hand during the first round. Let's see if that affects the champ moving forward in this fight. He seems to be the bigger, stronger fighter so far.

10:31 p.m.: And here comes the reigning and defending champion, Tevin Farmer, looking to make his fifth title defense in a little over a year. There's no love lost between these two and it's bound to create fireworks tonight.

10:12 p.m.: Roman-Akhmadaliev comes to a close, with both fighters trading fireworks during the waning seconds of the 12th round. Roman asserted himself in the final round, but it should be a case of too little too late due to Akhmadaliev's boxing.

10:00 p.m.: Akhmadaliev just put together a strong ninth round highlighted by rocking the champ to the body.

9:30 p.m.: Akhmadaliev seems to be a game challenger right now through two rounds.

9:20 p.m.: Both champion Daniel Roman and challenger Murodjon Akhmadaliev are in the ring, which has a No. 8 and No. 24 printed on the canvas with "Kobe" written over them in honor of the late basketball legend, Kobe Bryant. Roman's IBF/WBA junior featherweight titles are on the line in this one.