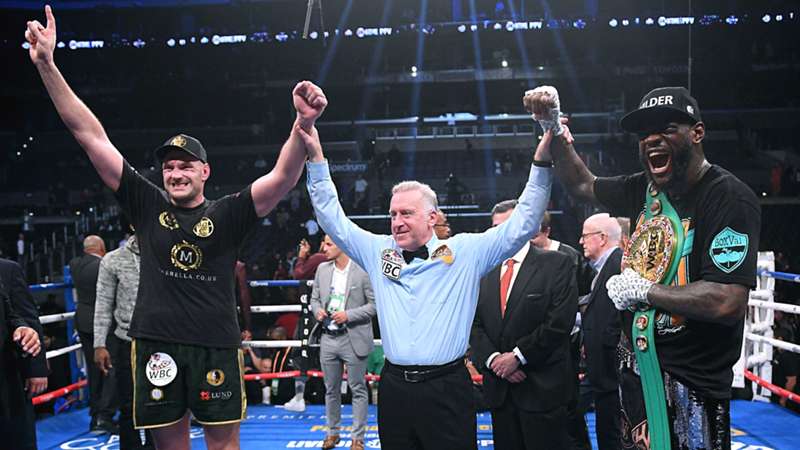 The Bronze Bomber could be fighting for the undisputed title next year if the necessary pieces fall into place.

Deontay Wilder dashed the hopes and dreams of boxing fans Tuesday when he announced his next opponent will be Luis Ortiz rather than unified heavyweight champion Anthony Joshua.

The Bronze Bomber, who holds the WBC title, redeemed himself Friday when he announced he'll have a rematch with lineal heavyweight champion Tyson Fury after he takes on Ortiz.

Well, As I always say I’m the realest Champion in the business and as I’ve mentioned before I must handle all my Controversial
Fights ASAP‼️

The announcement was reminiscent of a Floyd Mayweather Jr. move as it stole the spotlight from Joshua’s fight Saturday vs. Andy Ruiz Jr. at New York's Madison Square Garden.

A Wilder-Fury rematch won't determine the undisputed world heavyweight champion; nonetheless, it is a good sign for the division in 2020.

If the fight happens early next year, as was reported Friday, fans would get that bout and likely a matchup between Joshua (assuming he gets past Ruiz) and former undisputed cruiserweight champion and pound-for-pound contender Oleksandr Usyk after Usyk gets a fight at heavyweight later this year.

Usyk would become the mandatory challenger for Joshua through the WBO if he were to win his heavyweight debut. The bout would be easy to make because the two fighters are under the same promotional umbrella. Whoever emerges victorious from Wilder-Fury and Joshua-Usyk would then meet for the undisputed crown in the middle of the year.

Remember this, though: Just because a fighter says something, that doesn't mean it will happen. Neither Fury nor anyone from his promotional outfits has confirmed what Wilder said. But if Wilder is to be taken at his word, then fans should be in for a fantastic 2020.