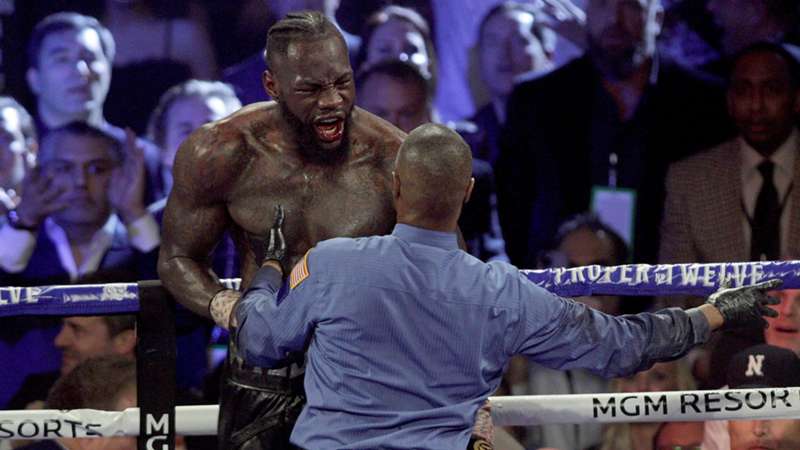 Wilder fired Breland after he threw in the towel as the American suffered his first pro defeat to Tyson Fury one year ago.

Deontay Wilder and his former trainer Mark Breland have directed angry remarks towards one another in the latest chapter of their very public falling out.

Over the weekend, Breland spoke out about the situation in an interview with The Fight Is Right. The famed trainer made it clear that he won't be working with Wilder again.

"One thing you all like to say is that, 'He's got a lot of power, and that's all.' I wish him well, and that's it. Only got his power, and we'll see how far that takes him, that's all I'm gonna say.

Wilder fired back at Breland during an interview with 78 Sports TV.

"It's crazy, bro," Wilder said. "It's crazy because I had this man around me for so long, you know what I'm saying? I had him around my family, my kids. I fed this dude.

"Even when many people thought I outgrew him. Many, many wanted me to fire him, but I kept him on board. And to hear all these things that he's saying, it's crazy."

Wilder, 35, had his five-year reign as WBC heavyweight champion ended in brutal fashion via seventh-round TKO in his rematch with Tyson Fury in February 2020.

The two fought to an absorbing split draw the first time around in December 2019. Things were different in the second bout, as 'The Gypsy King' was dominant, dropping Wilder twice and controlling the contest with an aggressive offense.

A minute into the seventh round, Breland threw in the towel to spare his fighter any further abuse, which to the majority of those watching the title fight was absolutely the right thing to do for Wilder's safety. Wilder, however, saw things differently.

Breland was removed from the Wilder team for conceding a fight his charge was not going to win before 'The Bronze Bomber' doubled down with a series of serious allegations, such as suggesting that the former multi-time Golden Gloves champion spiked his water bottle to hand him his first professional defeat.

"As you can see in that first (Fury) fight, he wasn't even in the ring. He left right after the fight was over like he was mad or something. Like my guys was paying attention. And then, in the second fight, he was the same way. His energy was off, like he didn't really want to be around and s—t like that like he already knew something was up.

"And now look at him, he running to the UK people doing interviews. Oh, you want to break your silence to the UK people, talking about somebody else poured the water. Nah, motherf—er. You did that s—t. But it's all good, bro. It's all good!

"You talking about this the end of my career? This just only the beginning of greatness. But for you, my friend, it is the end."