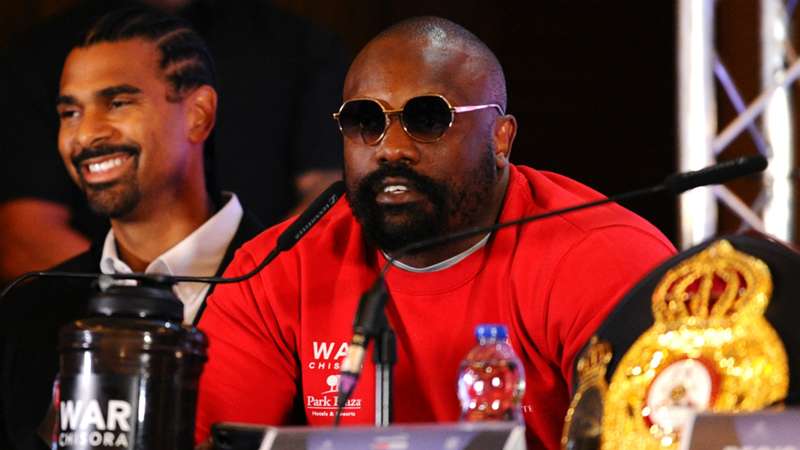 Dereck Chisora made like his nickname and declared "War" on the Regis Prograis-Josh Taylor launch press conference Monday in London.

Chisora, who's slated to face Joseph Parker in the co-main event at the O2 Arena in London on Oct. 26, took over the press conference and voiced his displeasure with not being the main event for the card.

"Who's the main event of this fight?" Chisora, rocking a pair of shades, asked during the session.

When Matchroom Boxing promoter Eddie Hearn proceeded to inform Chisora that it's the "gentlemen sitting next to you," as in Prograis and Taylor, who will be fighting in a WBA/IBF junior welterweight unification bout in the World Boxing Super Series Super final, the answer didn't sit well with the veteran heavyweight.

The point of Chisora's contention was that his fans are going to file into the O2 in droves, only for Prograis and Taylor to have the main event glory.

"I'm not going to be chief support to these guys," he continued. "We need to change that."

He demanded seconds later: "Give me the main event or pull me out of the f—ing show."

When Prograis interrupted Chisora's profanity-laced comments by telling him that he and Taylor are "No. 1 and No. 2," "War" responded by saying: "Nobody cares about you. Let's all be honest."

Chisora then flat out asked, "Am I taking the main stage? Yes or no? If I'm not, I want more money."

After not getting the immediate confirmation he was looking for, Chisora walked out of the press conference, altogether.

The 35-year-old Chisora (31-9, 22 KOs) is coming off of two straight victories, including a KO of Artur Szpilka in July, after losing to Dillian Whyte in December.