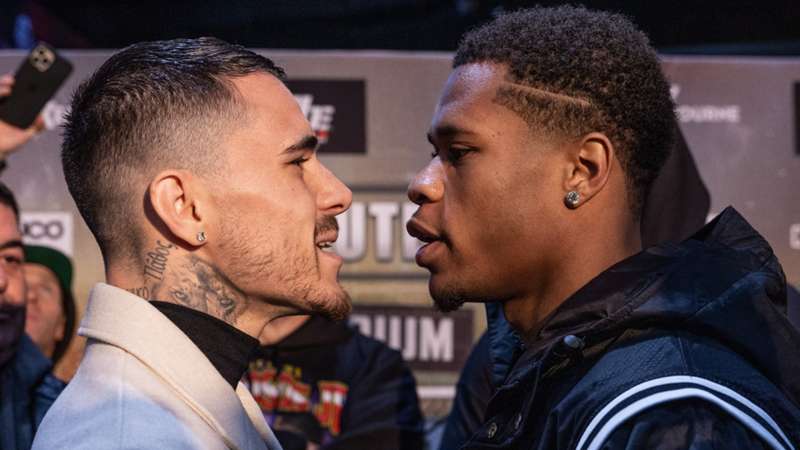 The undisputed lightweight title is up for grabs on Saturday night.

Fight week is underway in Melbourne where George Kambosos Jr. and Devin Haney will go head-to-head for the undisputed lightweight title.

The pair met at a press conference on Sunday and the WBA, WBO and IBF title holder claimed that the American didn't want to fight for all the marbles.

"I chose the biggest fights possible. I took out Teofimo Lopez. Obviously, this guy... I was prepared to fight Lomachenko. That was done. He couldn't make it because of the [Ukraine] war. No problem, Devin, wanna step up? And he did, OK, but he was forced into this. He's not my mandatory," Kambosos said.

"I became more obsessed. I became champion and realized I loved this sport more than anything in the world. I'm very blessed to be here. I made this happen. If it wasn't for me, this wouldn't be happening today here, and bring it on."

Haney, who is the WBC champion, went on the offensive in response to the Australian's comments.

"What was the point of even coming if you didn't bring the belts? Aren't we fighting for the belts? Didn't the government put up the money for all the belts and didn't the media come out because this is an undisputed fight between two champions? Why wouldn't you bring the belts? F—king clown," Haney said.

"This means everything. It's a dream come true of mine since I was a young kid. This is the biggest achievement of boxing. I can't wait for June 5 to come.

"There's nothing he can do in the ring that's better than me, and I will show it on fight night. I take nothing away from him. I think that he's a good fighter, but I just think I'm on a whole different level."