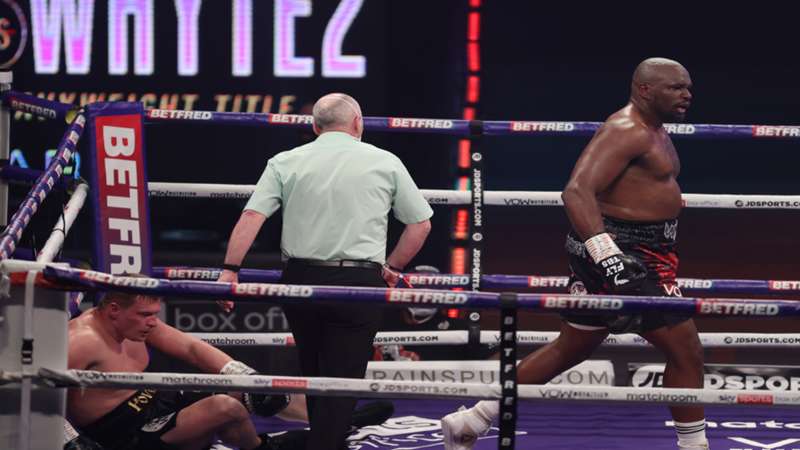 Dillian Whyte takes care of business and becomes next in line once again.

Dillian Whyte was fighting for his life when he faced Alexander Povetkin on Saturday from Gibraltar. If he didn't regain the interim WBC heavyweight title, his world title aspirations would go out the window.

Whyte had different things in mind, dominating Povetkin from start-to-finish to win by fourth-round knockout to recapture the championship. DAZN News had it scored 29-28 for Whyte at the time of the stoppage.

"I could have gotten the finish in the first round, but he's a tough guy," Whyte said in his post-fight interview. "But I think I could have finished him early. If he wants a rematch and they offer me the right money, I'll fight him again. I shouldn't have lost the first time. I'm annoyed at myself for losing the first time. I just had to be a bit smarter, that's all.

"From the first round, I was onto him, but I was, like, 'Let me relax. He's an Olympic gold medalist'. He's only lost to me, Joshua, and Klitschko. It shows how good he is, and he's very strong still. I can be a world champion. I can beat anyone. The rescheduling messed me up, but I was in much better shape this time. He had to pay tonight, man."

Whyte (28-2, 19 KOs) didn't waste any time in letting Povetkin know it was going to be a long night. In the opening moments, Whyte landed a right hand that grazed Povetkin that sent him back to the ropes. Moments later, Whyte shook Povetkin one more time with an overhand right. At the end of the round, Whyte wobbled Povetkin one more time with a right hand. It looked to be a matter of time before Whyte put Povetkin away.

Whyte continued to unload the heavy artillery on Povetkin in the second and third rounds to little resistance. Povetkin was standing on the center line and not moving his head whatsoever. He was a sitting duck looking to be put out of his misery.

"The Body Snatcher" obliged with Povetkin's wishes in the fourth round. Whyte connected on a right hand which caused Povetkin to nearly tumble through the ropes. Sensing Povetkin was ripe for the taking, Whyte took his time, landed a short right hand, and then put the former champion away with a detonating left hand that almost sent Povetkin through the ropes and onto the mat. Povetkin got back to his feet but is worse for the wear. The referee saw the same thing and waved the fight off.

With the victory. Whyte is back in the thick of things in the heavyweight division. Anthony Joshua and Tyson Fury look to be on the road to a two-fight series to determine an undisputed heavyweight champion, so they are likely to be locked up for the next year. Some have suggested former WBC titlist Deontay Wilder, who is currently without an opponent. Whyte joked about a tomato can for his next foe, but his promoter Eddie Hearn suggested that maybe Wilder could be the guy.

"Eddie needs to get me an easy fight so I can make some damn money and not take so much risk," Whyte said with a chuckle. "I want the world title!"

"He manhandled Povetkin from the first round," Hearn said. "His world championship dreams were on the line tonight. I'd like to see him box quickly again in the summer, maybe let's go over to the States.

"We've called for the Deontay Wilder fight for a long, long time. He actually DM'd Dillian Whyte and told him, 'I will never, ever give you that fight.' Now he got knocked out. He's calling for the fight with Dillian Whyte. To me, that's a stadium fight, that's a colossal fight. But I'd like to get (Whyte) back out quickly in the summer. The ultimate game has been to challenge for the world heavyweight title. Tonight was about getting his career back on track."

facebook twitter whatsapp
Up next at Whyte vs. Povetkin 2 is Chris Kongo (12-0, 7 KOs) taking on Michael McKinson (19-0, 2 KOs) in welterweight action. Somebody is going to lose their "0".

facebook twitter whatsapp
Webb def. Pfeifer via TKO at 1:51 of the second round. After an exciting first round, Webb got into a groove in the second. Webb connects on a solid left hook behind the neck to send Pfeifer down for the first time. Pfeifer makes it back to his feet but not for long. Webb pumps the jab and blasts a straight right hand that sends him down for the second time. The referee inexcusably allowed Pfeifer to continue. Seconds later, Webb hit a short left hook followed by a right uppercut to drop Pfeifer for the third and final time of the round as the referee waves it off.

facebook twitter whatsapp
Welcome to DAZN News' live coverage of the rematch for the interim WBC heavyweight title between Dillian Whyte and Alexander Povetkin. If their first fight back in August was any indication, we should be in for a treat. Grab the snacks, drinks, go to the bathroom and get comfy on the couch for what should be an entertaining card.