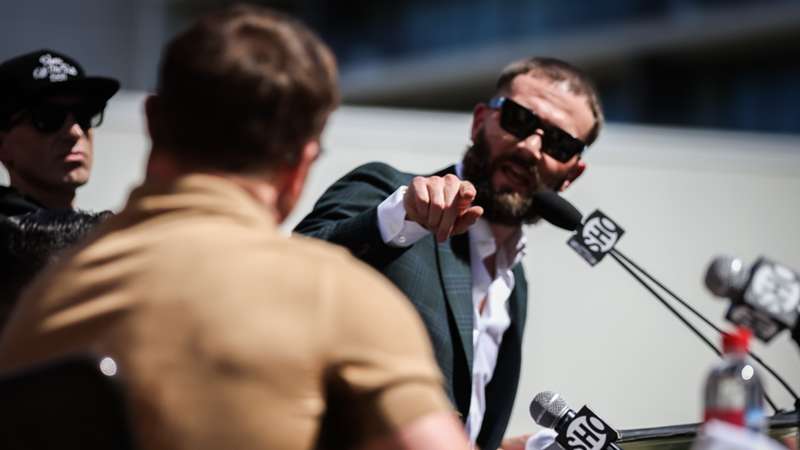 The DAZN Boxing Show wondered who has the advantage after their confrontation.

The DAZN Boxing Show considered if Saul ‘Canelo’ Alvarez and Caleb Plant’s spat earlier in the week gives either fighter the upper hand.

The pair meet in November to contest Canelo’s WBA, WBC and WBO belts, while Plant holds the IBF strap. The winner will emerge as the undisputed super middleweight champion, the first time any athlete has held all four belts at 168lbs.

Canelo and Plant exchanged blows in a confrontation at a press conference and Akin Reyes and Barak Bess ran through the interpretations of the fallout.

Ak said: “Canelo has been open lately, more expressive, this is just a little scuffle. It doesn’t mean anything, but the optics say something else.

“Look at the way Canelo slipped that punch. It might psychologically mess Caleb Plant up, because of his confidence levels. The odds may be going to Canelo a little more.”

Barak agreed, but wondered if Plant’s brash approach might unsettle the Mexican.

“Yes, that slip-counter was beautiful, but he’s fighting a guy that’s not scared. People push, but people don’t throw punches,” he observed.

“He slapped the best fighter in the world. That says something. You’ve got $10 million on the line and you’re willing to give it up by slapping a man.”

Ak concluded that he believed Canelo remained the favourite because of the perceived gulf in quality, saying: “Caleb is not that guy [to beat Canelo]. He’ll make it interesting for a few rounds. No disrespect to Caleb Plant, but he's not on that level.”