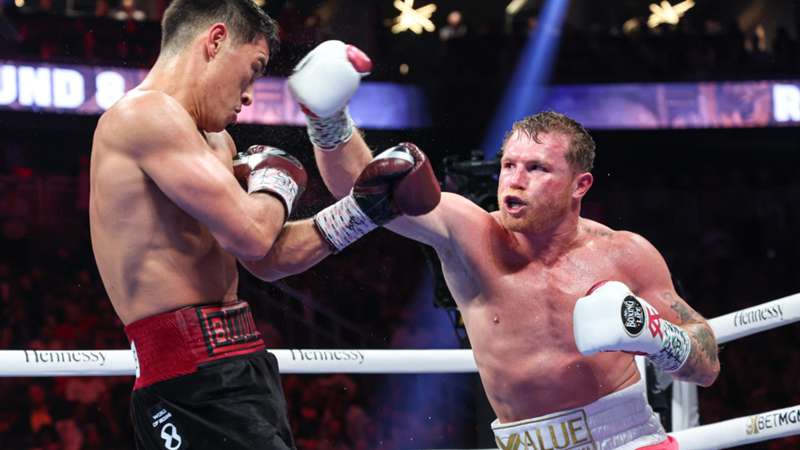 Canelo Alvarez faces a number of tough tests if he decides to eventually return to 175lbs.

Artur Beterbiev is a more routine fight for Canelo Alvarez than a Dmitry Bivol rematch. That’s the verdict of Eddie Hearn ahead of the Mexican’s trilogy bout with Gennadiy Golovkin, live on DAZN and DAZN PPV on September 17th.

Bivol shocked the world in May when he outpointed Canelo and bow it appears he could be heading towards an undisputed battle with Beterbiev.

Earlier this month, Beterbiev was in devastating form as he demolished Joe Smith in two rounds to win the WBO belt at 175lbs.

The obvious clash at light-heavyweight is now a match-up for all the belts, but it looks like Canelo has not given up hope of returning there.

Hearn believes Beterbiev would be his man’s best shot of reclaiming a world title at light-heavy.

“Beterbiev is an easier fight for Canelo Alvarez,” said Hearn when speaking to The DAZN Boxing Show before moving onto a potential undisputed bout.

“Bivol beats Beterbiev. We can do that fight on ESPN or me and Bob [Arum] can see who bids the most for that fight. Why aren’t they [Top Rank] talking about this fight? Bivol doesn’t have a fight scheduled."

Canelo vs. GGG 3 will air live on DAZN or DAZN PPV worldwide except Mexico, Latin America and Kazakhstan. For more information, click here. To sign up for DAZN now, click here. And you can watch the full Eddie Hearn interview on DAZN here.