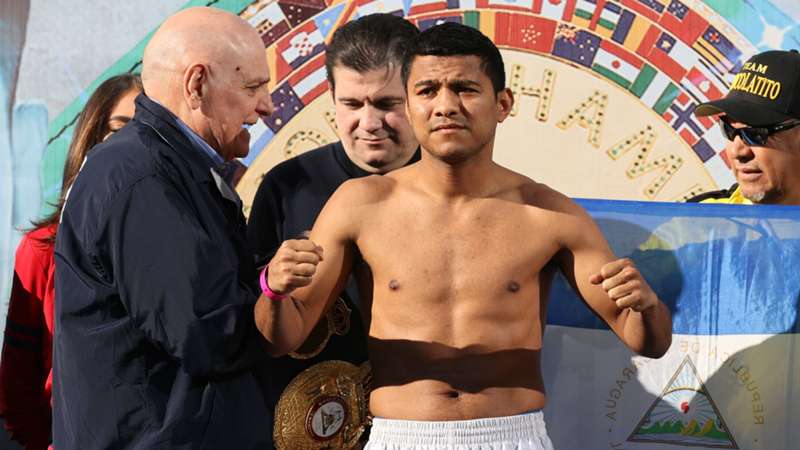 Julio Cesar Martinez steps up in weight and class as he takes on the legendary Roman Gonzalez.

It's not the fight the boxing world was expecting on March 5, but it's lined up to be a fight for the ages.

Eddie Hearn announced on Tuesday that unified super flyweight champion Juan Francisco Estrada had to pull out of his scheduled trilogy clash with Roman Gonzalez due to COVID-19 complications. However, 'Chocolatito' remains on the card as he will now face WBC flyweight titlist Julio Cesar Martinez at the Pechanga Arena in San Diego, live on DAZN.

Still in shock that this fight is happening but I cannot wait! Huge respect to both men for accepting the challenge..this is going to be an absolute thriller live on @daznboxing !!! 🇳🇮 🇲🇽 pic.twitter.com/QCRfTkiKxx

"Sometimes the most unbelievable things happen in boxing," Hearn said when speaking on The DAZN Boxing Show. "I was in the cinema, and the film had finished. I looked at my phone, and it’s Juan Hernandez, (who) is Estrada’s manager. (He says) ‘Eddie, I’m really sorry to say this, but Estrada had COVID a couple of weeks ago, and he’s been trying to get back to the gym, but he’s just not going to be ready for March 5’.

"I’m like, ‘Juan, it’s an unbelievable fight. Two, we sold so many tickets in San Diego already. Three, why does this always happen to me’?"

Thinking about what he was going to do, Hearn's phone started ringing about possible opponents for Gonzalez. Then, it hit Hearn on what he should do.

"Sean Gibbons messages me about (Jerwin) Ancajas, IBF world champion. Nice fight. That’s not Estrada-Chocolatito 3, but good fight," Hearn explained. "Robert Diaz messages me about Joshua Franco, WBA world champion. Good fight as Chocolatito is always in good fights. So, I’m thinking about those two, and then all of a sudden, I think to myself, ‘What about that crazy son of a gun. You’ve got a flyweight in Julio Cesar Martinez.

“Julio Cesar Martinez and ‘Chocolatitio’ is one of the great moments where a young fighter says, ‘I’ll do it' . “I spoke to Eddy Reynoso (Martinez's manager) about the fight, and he said, ‘My crazy man will be ready.’ Forty-eight hours later, we just have a bloodbath on March 5."

Gonzalez (50-3, 41 KOs) is on a career resonance. He'd gone undefeated in 46 fights and was regarded as boxing's No. 1 pound-for-pound great. Back-to-back losses to Srisket Sor Rungvisai changed all of that. People felt he was done and past his peak. Instead, Gonzalez has shown he's still a force to be reckoned with by winning four consecutive fights, with three of those wins coming via stoppage and claiming the WBA belt. The 34-year-old was looking to avenge his narrow split-decision loss to Estrada in March 2021.

Martinez (18-1, 14 KOs) is regarded as the best flyweight in the world and one of the most ferocious fighters in the sport. His nonstop style and throwing from every angle has endeared him to boxing fans. He's coming off a no-contest against McWilliams Arroyo in November and entering the biggest fight of his career against someone whose style replicates his.