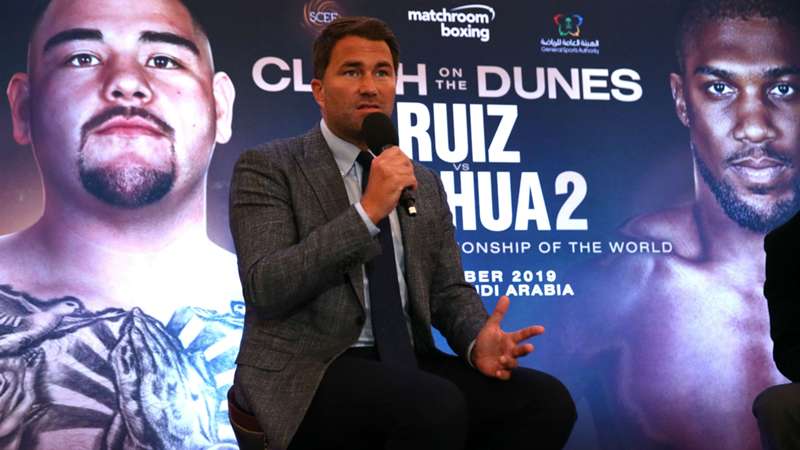 Matchroom promoter Eddie Hearn is unwilling to make a fight between Teofimo Lopez Jr. and Devin Haney while the unified lightweight champion is demanding $10 million.

Matchroom promoter Eddie Hearn has dismissed out of hand the possibility that Teofimo Lopez Jr. could be paid $10 million for a fight with Devin Haney .

Haney is the WBC lightweight champion, while Lopez is the WBO, WBA, IBF and WBC 'Franchise' champion after beating Vasiliy Lomachenko in October 2020.

The American fighter describes himself as the undisputed champion, but Hearn has contradicted those claims.

Speaking to Boxing Social, Hearn explained: “I know Teofimo just bought a T-shirt range out, ‘Undisputed.’ I think he should call those back in and change the logo.

“I did say to him, and this is my honest opinion, he should be undisputed. We shouldn’t be in this position that we’re in, but he’s not undisputed because the other governing bodies do not recognize the Franchise champion as someone that can unify.

There is plenty of speculation over who Lopez would fight next, but he and his father - Teofimo Lopez Snr. - have been open in their demands to be well compensated.

Hearn would be open to a Lopez vs. Haney fight but thinks the demands being made are unrealistically.

“I think Teofimo Lopez against Haney is a wonderful fight. Listen, [Teofimo] asked me for $10 million for that fight,” said Hearn.

“You can’t get there, but I’m sure we can make him a nice offer. Teofimo is a nightmare at the moment for Bob Arum, and Bob isn’t mincing his words at the moment. He’s had enough. So he’s saying, ‘I want this, $5 million minimum, I want eight, I want nine, I want ten.’ So right now, I’ll leave that to Bob and Top Rank to put those numbers together because in this world right now, it ain’t going to happen.”

Lopez is likely to fight his IBF mandatory challenger George Kambosos Jr. in the next few months in Australia, where a sizeable crowd can be allowed in, with the current champion previously saying he expected to fight three times in 2021.