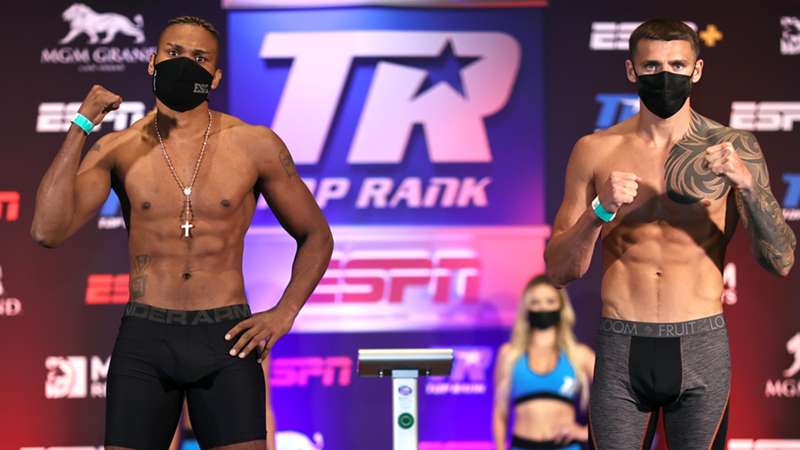 Which light heavyweight will get one step closer to being crowned a world champion in this WBO title eliminator?

Eleider Alvarez really bolstered his name in boxing via his two battles against Sergey Kovalev.

Now, continuing his climb back up to the top of the division, the former world light heavyweight champion takes on Joe Smith Jr. at the MGM Grand Conference Center in Las Vegas on Saturday night. The fact that the bout is a WBO title eliminator only adds to its significance.

Alvarez became the WBO light heavyweight champion with a shocking seventh-round TKO of Kovalev in August 2018, before the Russian avenged the defeat with a unanimous decision over the Colombian boxer in February 2019 to take back his title. Alvarez was able to produce a seventh-round KO of Michael Seals in January before the coronavirus wiped out boxing's scheduled events for several months thereafter, beginning in March.

Alvarez faces Smith, who isn't foreign to notable victories and is trying to work up the ladder himself. Smith, 30, is most notoriously known for retiring boxing legend Bernard Hopkins with an emphatic eighth-round TKO in December 2016. Since then, though, Smith has managed a 2-2 record, including a unanimous decision loss to WBA light heavyweight titleholder Dmitry Bivol in March 2019. Smith did bounce back with a split-decision win over Jesse Hart in January to set the stage for this bout, which Top Rank chairman Bob Arum called a "50-50 fight" in a recent press release.

“This fight is critical for both of our careers," Alvarez said in a press release statement. "I respect Joe Smith, who has proven to be an elite fighter. However, I have all the tools to beat him and that's what I intend to do. My goal is to become a two-time light heavyweight world champion.”

Smith vows to have his hand raised.

"This fight means everything to me," Smith said. "It’s my path to a world title fight and I know this is my second chance to turn my dream into reality. Alvarez is a former world champion, and in my mind, I am treating this as a world title fight. To get there, I have to, and will, win this fight."

Here's everything you need to know about Eleider Alvarez vs. Joe Smith Jr.

How to watch Alvarez vs. Smith: TV, live stream

The Alvarez vs. Smith fight and its co-feature, pitting Rob Brant vs. Vitaliy Kopylenko in middleweight action, will stream live on ESPN+, as will the undercard before it.

How much does Alvarez vs. Smith cost?

ESPN+ costs $4.99 per month or $49.99 annually. Current ESPN+ subscribers will get the Alvarez vs. Smith card as part of their subscription.

Where is the Alvarez vs. Smith fight?

The Alvarez vs. Smith fight will take place at the MGM Grand Conference Center in Las Vegas. The venue has been nicknamed the MGM Grand "Bubble," with the ongoing coronavirus pandemic prohibiting fans from attending. While Sin City is the fight capital, this actually marks the first time that Alvarez and Smith are making a fighting appearance in Las Vegas.