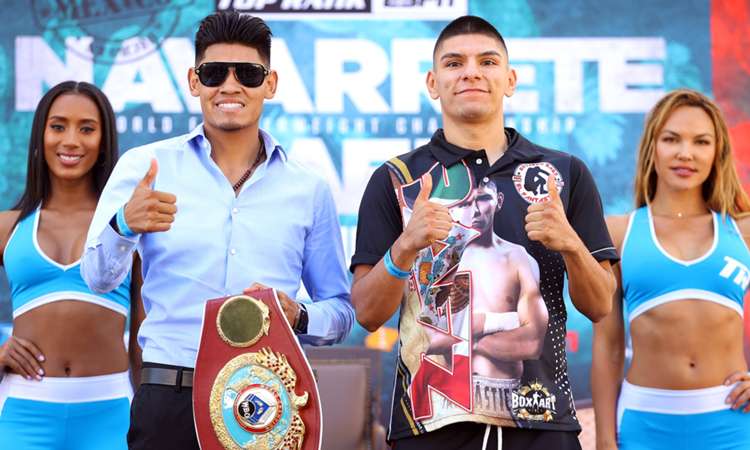 Top Rank
Check your region for Usyk vs. Joshua live on DAZN

Although the Mexican champion would like to unify at featherweight, he understands that boxing politics could force him to move up a division in search of a challenge.

Mexican champion Emanuel Navarrete knows that if he stays at 126 pounds, he will most likely have to wait forever to land a fight with any of the other world champions in the division.

While he would love a fight against Leo Santa Cruz or Rey Vargas, as well as England's Josh Warrington or Leigh Wood, to challenge for an undisputed championship, he is aware that negotiations are almost impossible due to promotional or television rivalries.

"All champions plot their course, and I never see a Navarrete in their equation. And not that they give you a chance, but I do want to completely unify a division. I'm on, and I'm totally willing to sacrifice one more year to keep making this weight. There's Vargas, who asked for Leo Santa Cruz. There's Josh Warrington, who is now injured and has never mentioned me. These are things that make you make a forced decision because you don't have to be 126 because there are no important fights. With all due respect to my teammates, who else can I fight," said the 27-year-old double world champion (super bantamweight and featherweight) in an interview with DAZN News, who returns this weekend in San Diego to face Mexican Eduardo Baez in what will be the third defense of his WBO crown.

Navarrete assured that he sees himself retired at 30 years of age, and that is why he does not plan to wait long for the big names in the featherweight division, knowing that at super featherweight, there are much more interesting and easier plans to land.

"El Vaquero" wants to move up to super featherweight because there is the possibility of being able to face the likes of Oscar Valdez and Shakur Stevenson, plus he feels his career is lacking.

"At 126 pounds, I am opting to stay only if there is an attractive fight, of a high level. What my career needs is to give him something much more than a win. I need something strong because I'm already staying. What I need is a unification at 126, a big-name fight at 130, or a world title. There are very important fighters at 126, but when they hear my name, they don't say anything. Besides the fact that there is a lot of influence from the promotion companies and television, which is also very complicated," he explained.

But before he can plan his promotion to another division, Navarrete hopes to defend his championship for the third time and maintain the winning streak he started in 2012.