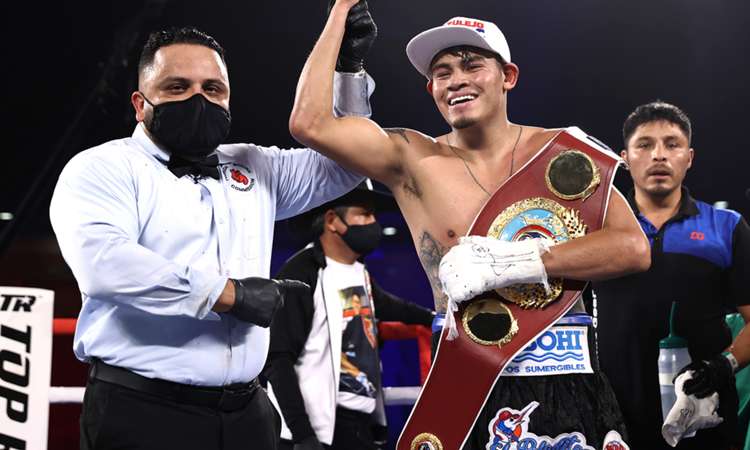 It's time that the Mexican warrior and reigning WBO featherweight champion gets his flowers.

Some world champions get respect and adulation upfront. Others receive it on the back end.

Wherever Emanuel Navarrete falls on that scale, boxing is long overdue to heap major respect on his name. The Mexican warrior deserves his flowers now.

Navarrete defends his WBO world featherweight title against Joet Gonzalez at Pechanga Arena in San Diego on Friday night and the bout reinforces that he is as busy of a champion that boxing currently touts.

After capturing the junior featherweight world championship from Isaac Dogboe in December 2018, Navarrete made five defenses of the title before moving up to featherweight and becoming the WBO titleholder there, too, with a win over Ruben Villa last October. He then defended the crown with a 12th-round TKO over Christopher Diaz this past April.

Watching Navarrete, you get the sense that the 26-year-old would fight monthly if Top Rank and the boxing powers that be would let him. His buzzsaw, forward-fighting style only lends more credence to that theory.

I was at Madison Square Garden in December 2018, when Navarrete splashed on the scene as an underdog against Dogboe, the then-WBO junior featherweight champion. I remember Dogboe predicting a fourth-round knockout and attempting to intimidate Navarrete leading up to the bout.

The outcome was anything but that as the taller Navarrete walked the champion down and chopped right through him with a relentless attack that had him winning the title via unanimous decision.

When they met in a rematch five months later, fans and critics alike wondered if Dogboe had simply overlooked Navarrete in their initial meeting. Was he poised to avenge his loss?

Well, not quite, as Navarrete made sure to put a punctuation mark on his first title defense via a stirring 12th-round knockout of Dogboe.

And the hits just kept coming for “Vaquero” in 2019, as he defended his title three more times in the year with consecutive knockout victories over Francisco De Vaca, Juan Miguel Elorde and Francisco Horta.

When 2020 rolled around, Navarrete kept unleashing thunder, as he defended his title two more times before defeating Villa to be crowned WBO featherweight champion in his move up. If anything, his knockout over Diaz in April demonstrated that Navarrete’s power translates at 126 pounds.

That’s not promoter bluster. It’s a fact about the fighter who stands at 34-1 with 29 KOs to date and hasn’t tasted defeat since July 2012. His busy booking of bouts matches his busy style in the ring.

And if Navarrete pummels his way past Gonzalez in a nationally-televised bout Friday night, he’ll only be hungry for more as he shared with DAZN’s Erika Montoya recently.

"I want fights that are like (Marco) Barrera vs (Erik) Morales,” Navarrete said. “The kind that sticks in the memory.

"In my division there are a lot of options on the table, but before I can think about them, I'm going to have to focus on coming out of this fight with my hand up.

"Joet is a great opponent and very dangerous. There are a lot of cards for my future, as there are names like Leo Santa Cruz or Oscar Valdez who I know could put on legendary fights and I know I will face them at some point.”

Perhaps those fights will finally give Navarrete the long overdue respect and flowers he deserves.