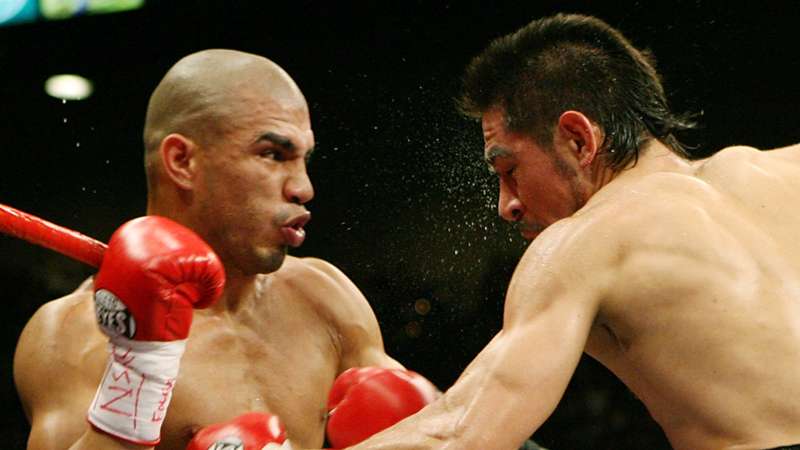 (Getty Images)
Watch Munguia vs. Rosado on DAZN (Except Mexico)

With Munguia-Rosado having the ramifications to pack fireworks Saturday night, it's only right we take a stroll through memory lane.

With Jaime Munguia vs. Gabriel Rosado having all the potential to be a blood-and-guts scrap at the Honda Center in Anaheim, Calif. on Saturday night, DAZN News thought it was only right to look back at five classic Mexico vs. Puerto Rico boxing wars.

Cotto walked into the MGM Grand Arena in Las Vegas a pristine 32-0 betting favorite, having defended his WBA welterweight championship four times. But what he got from Margarito that night was an absolute war. The taller Mexican met the Puerto Rican puncher head on with a similar relentless attack that bludgeoned his face. The end of the bloody carnage finally came via an 11th-round TKO with Margarito's hand raised in a tilt which saw the Mexican instantly win over boxing fans and critics alike for his fighting spirit.

However, in Margarito's next fight against Shane Mosley, he was revealed to be concealing plaster in his hand wraps, creating doubt about the energized performance. Cotto exacted sweet revenge over Margarito in December 2011, when the Puerto Rican closed the Mexican's right eye shut, forcing the bout to end at the start of the 10th round, effectively ending their rivalry.

De La Hoya-Trinidad not only stands as one of the greatest examples of the Mexican-Puerto Rican rivalry, but it remains one of the better performing pay-per-views in boxing history. The actual fight had De La Hoya winning on the cards until he thought he was up comfortable enough to cruise during the final few frames. That would prove to be a costly mistake from the "Golden Boy," as Trinidad came on strong over those last few rounds and convinced judges to see it his way via a controversial majority decision. The then-26-year-old Trinidad handed De La Hoya his first career loss that bout and also swiped his WBC welterweight title to go along with his own IBF strap that memorable night at the Mandalay Bay Events Center.

Trinidad-Campas was shortlived, but oh boy did it pack its fair share of fireworks. The bout had the Mexican, Campas, unload a short, compact left hook that landed flush to Trinidad's face and scored a flash knockdown of the Puerto Rican in the second round. Trinidad would rebound, though, unleashing everything he had in his arsenal until the granite-chinned "Yori Boy" finally had enough toward a fourth-round TKO in favor of "Tito."

Ramirez had tasted defeat at the hands of the Puerto Rican back in May 1983 via unanimous decision and their rematch appeared to be heading in the same direction when Rosario blasted him with two knockdowns. The rematch at the Hiram Bithorn Stadium in San Juan, Puerto Rico had the two combatants going straight at it from the opening bell with Rosario scoring a flash knockdown in the first round courtesy of a straight right hand to the face. A thunderous left-right combination to the head put Ramirez down in the second round as well. But Ramirez would have a resounding rally in which he literally punched Rosario until the Puerto Rican's legs went completely dead, resulting in a memorable fourth-round TKO to win the WBC lightweight title and taking the bragging rights that came with it from this all-out war.

Want to see a relentless fighter moving forward and refusing to back down? Check the footage from Sanchez punching through Gomez en route to an eighth-round TKO to retain his WBC and The Ring featherweight titles. The gutsy performance bolstered Sanchez's fighting legacy in resounding fashion.