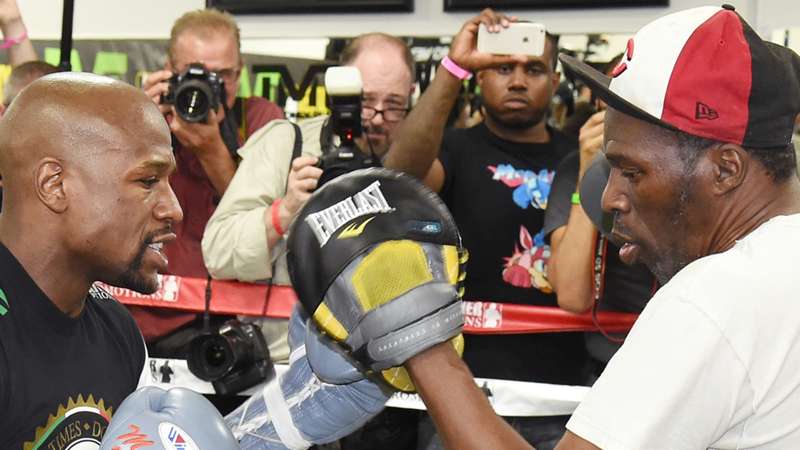 With his latest exhibition bout with Don Moore imminent, who can forget when Floyd Mayweather revealed his five best boxers of all time?

During his career, Floyd Mayweather Jr. always called himself 'TBE' (The Best Ever). Most fans chuckled at the notion and just thought Mayweather was tooting his own horn to help sell pay-per-views.

But if there's one thing we have learned since his retirement, it's that Floyd Mayweather Jr. loves him some Floyd Mayweather Jr.. During an interview on Fat Joe's podcast in 2020, Mayweather was asked who he'd rank as the top five fighters of all time. To the surprise of nobody, Mayweather placed himself at the top heap. The rest of the list, while good, leaves out two guys who rank on the majority of listings as the best in the history of boxing — Muhammad Ali and Sugar Ray Robinson.

Instead of saying either Ali or Robinson as his next selection, Mayweather gave a surprising choice at heavyweight.

“If we’re gonna go with heavyweights, I gotta be honest, I gotta go with Larry Holmes," Mayweather said. “Because Larry Holmes beat everybody in his era. When Larry Holmes got beat by Mike Tyson, he got beat by a young, hungry champion, and he came out retirement and got beat by Tyson. He had the basic fundamentals. He had the jab, and even right now, he’s still living a great life because he made smart investments, so he was good from the beginning of his career until the end of his career."

Holmes retired with a record of 69-6 with 44 knockouts and defended the WBC and IBF titles against 19 fighters, the second most behind Joe Louis. Although widely recognized as one of the greatest heavyweights, it comes as a surprise that he put Holmes over the widely regarded greatest fighter of all-time.

Ultimately, it's Mayweather's list, and who is going to tell him who he should and shouldn't have on his personal collection of fighters?