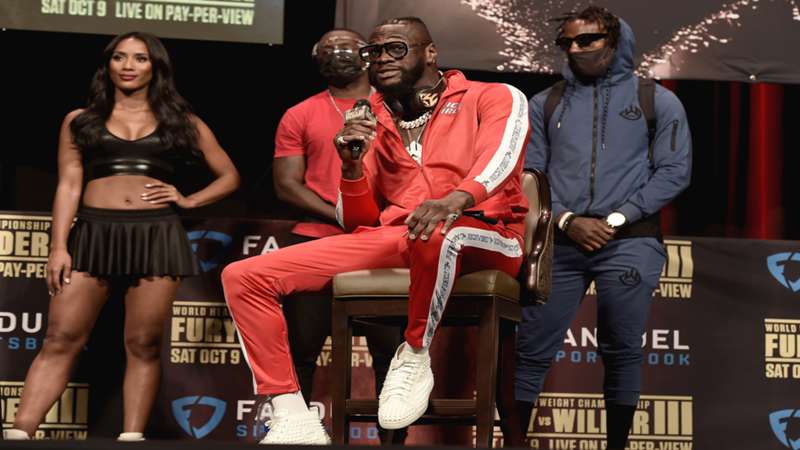 Could this be the swan song for "The Bronze Bomber?"

LAS VEGAS — You learn a lot about a fighter after they suffer their first defeat. It can go the way of accepting that you lost to the better person in that particular fight and look to improve in your next time out, or you can go the route of refusing to concede that you didn't have "it" and start blaming everybody else for why the defeat occurred.

Heading into Saturday's trilogy contest with Tyson Fury, Deontay Wilder's selected to go the latter route. Instead of saying Fury was the better fighter on the evening of Saturday, February 22, 2020, at the MGM Grand Garden Arena, Wilder's played the blame game from the moment he stepped through the ropes and into his locker room after getting dropped twice and losing via seventh-round stoppage when co-trainer and former world champion Mark Breland threw in the towel because he didn't want to see his charge suffer any more punishment and was looking out for his well being. The excuses shockingly came fast and furious.

Wilder blamed the loss on Breland and subsequently fired him for not following his orders and for allegedly spiking his water. The Alabama native proceeded to blame his 45-pound costume he wore to the ring — he says it tired his legs — he claims he was "drained" in having to fulfill his media commitments to promote the rematch, and he says Fury's gloves were doctored even though Wilder's head trainer at the time Jay Deas was in the room watching the latter's gloves being wrapped. Criticism came far and wide towards Wilder. For a person who'd always been jovial, he turned the loss into a me vs. the world attitude and refused to accept the fact he lost for the first time in his professional career.

The trilogy affair with Fury is by far the biggest fight in Wilder's career. A second consecutive setback would put Wilder in an awkward position going forward. The quest to regain the WBC heavyweight title in a few short days is a must-win situation for Deontay Wilder.

"[If] I beat him this time, his career is over," Fury told DAZN News earlier this week. "He really needs a win, but he isn’t getting it."

Fury's assessment isn't outlandish in the slightest bit. Remember, Wilder has absorbed a lot of punishment in the first two fights with Fury and his two contests with contender Luis Ortiz. You can only take so many blows to the head. The brain isn't made to get punched. Also, Wilder will turn 36 on October 22. When you get to that age, it is usually the final stages of a fighter's prime years.

It has been an unusual buildup to a Wilder fight. Typically, Wilder is boastful, flashing his smile so wide that it beams through the room, and screaming his signature catchphrase, "Bomb Squad." But, instead, we have seen someone who's been relatively quiet, someone who's done very little media to drum up interest in the biggest fight of his career, and has the look of someone who doesn't want to be here.

Evidence of that was at Wednesday's presser. Wilder seemed more interested in looking at and talking on his cell phone, getting perfume sprayed on him by his fiancee, and listening to headphones. He didn't want to be there and admitted as much at the presser.

The notion has been in the buildup, and during this fight week, that Wilder is mentally broken and still can't come to the realization he lost the rematch fair and square to Fury. The bravado which he's known for looks to be gone. The aura surrounding him appears to be nonexistent. For his first 43 fights, Wilder had been the bully. But Fury flipped the script 20 months ago and battered Wilder to the point that Breland had no choice but to throw in the towel so his guy would no longer have to take the beating he was receiving — possibly saving his life so he can be a functioning father to his children in the future.

Mike Tyson was never the same after losing to James "Buster" Douglas. The invincibility was gone. The bully had been stopped in his tracks. Wilder doesn't have to be a cautionary tale like Tyson ended up becoming.

Wilder has skill. Let's not be fooled into thinking that isn't the case. You don't win a bronze medal in the 2008 Summer Olympics by closing your eyes and swinging for Hail Marys. He has tools in his toolbox. While he has the most devastating right hand this side of Tyson, Wilder also has a better-than-average jab and left hook. Plain and simple, he doesn't use them enough because he's been too reliant on the right hand. Enter former opponent and new head trainer Malik Scott.

“I believe in what we’ve been doing in camp. I believe in my team and the ability that I have," Wilder said. "Like I said, Malik [Scott] has brought the best out of me, things that I haven’t done ‘cause I haven’t had to — but to bring it out and be able to do it on a consistent basis, I think it’s gonna be beneficial for me, and I’m looking forward to displaying my talent and ability up inside the ring.

“Everyone knows I have power and my power never diminishes from the first through the 12th [rounds]. But I want to show a little bit more. Like I said, I’m gonna beat him up, and I’m gonna knock him out.”

Maybe Scott is the guy Wilder needed. Sometimes after being with the same head coach for so long, athletes need to hear a new voice and a new mind to gain a fresh perspective. Things could have been repetitive for Wilder. He's been too reliant on the right hand and solely been looking for it to be his saving grace. The strategy worked in the first fight with Fury but didn't in the rematch.

Another cause for concern is the matter of Wilder talking more about retiring in the near future.

"I think I'm gonna quit this sport when I feel that energy, which is close," Wilder said recently on The Last Stand Podcast with Brian Custer. "I can feel it getting close, retirement. I can feel it."

When you start bringing up the dreaded r-word, that generally means you already have one foot out the door.

Maybe, just maybe, Wilder is fooling all of us into a false sense of security. Perhaps he wants us to think he's finished, and he isn't in the right frame of mind going into the most important bout of his stellar career.

It's do-or-die for Deontay Wilder. It would be two consecutive defeats, and he would be exposed as this generation's version of Mike Tyson. But unlike Tyson, Wilder, for reasons that can't be explained, has never fully resonated in the minds of the public, which in turn would diminish his drawing power significantly.

A win and Wilder's right back in the driver's seat. A loss and it will be all she wrote for "The Bronze Bomber.”