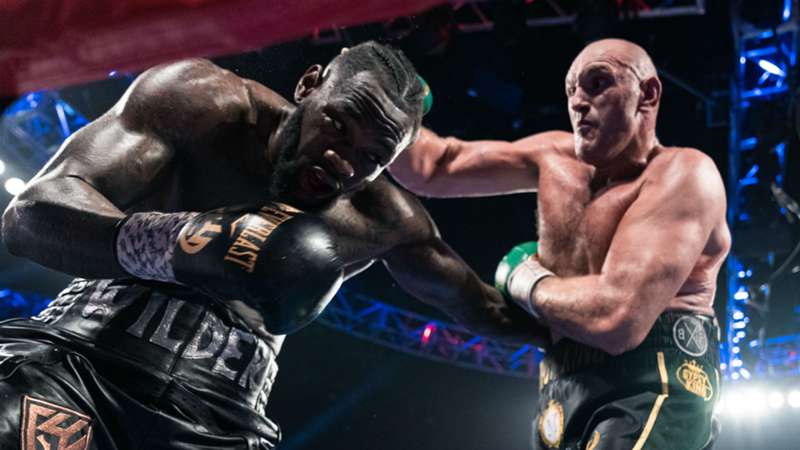 The WBC belt is on the line on October 9.

Tyson Fury and Deontay Wilder meet on October 9 as they look to finally settle their long-awaited trilogy rematch.

The pair first fought in December 2018 and an action-packed first fight left plenty of observers talking, wiith Wilder declared the winner but many disputing whether Fury could win a rematch.

A second fight went ahead in February 2020, with Wilder soundly beaten by an on-form and ruthless Fury display.

Contractual disputes, the coronavirus pandemic, a coronavirus outbreak with Fury's camp, and the pursuit of an undisputed fight with Anthony Joshua delayed and delayed the fight. Here is how we got here:

What happened in the build-up to Fury vs. Wilder 1?

The build-up to the first fight began in earnest in January 2016, when Fury confronted Wilder after the American brutally knocked out Artur Spzilka. Fury entered the ring and confronted his future opponent, and said: "There's only one Tyson Fury, what you got to say about that, Deontay?"

Wilder retorted: "We all know, Fury, this is just an act, I ain't scared of nobody and I'll come to your backyard for that fight, baby!"

Fury offered: "Any time, any place, anywhere, when you're ready, I'll fight you in your back garden like I done [Wladimir] Klitschko I'll beat you, you bum! You're a bum!"

"I don't play this, you can run around like you're a preacher and all that but I promise you when you step in this ring I will baptise you!”

After Wilder dispatched Alexander Povetkin, and Fury vacated his belts in October 2016 due to substance problems, the fight would have to wait until the Briton regained his boxing licence and was fit to fight in December 2017.

Wilder then looked set to fight Anthony Joshua, only for that fight to fall through, and a match-up was eventually made for December 1, 2018.

What happened in the first Fury vs. Wilder fight?

The fight went ahead at the Staples Center with a crowd of almost 18,000.

Fury showed his impressive agility for a man his size, dodging most of Wilder’s heaviest punches, but in the fourth round Wilder connected with Fury’s nose to draw blood, and two rounds later Fury switched to a southpaw stance, and pushed Wilder onto the back foot.

Wilder fought back in the following rounds but by the tenth had started to tire, and Fury started to take advantage. However in the 12th, there was a dramatic almost-denouement when Wilder let fly with a right-left combination to send Fury to the canvas, with Fury somehow beating the count when the crowd assumed it was game over. Wilder and Fury did not have enough left in their respective tanks to force the issue before time was called.

The fight ended with a split decision draw 115-111 for Wilder, 114-112 for Fury, and 113-113, though many observers felt that Wilder was the worst of the pair, and perhaps home advantage was crucial to the Bronze Bomber retaining the title.

After the fight, Wilder claimed: "I think with the two knockdowns, I definitely won the fight. We poured our hearts out tonight. We're both warriors, but with those two drops, I think I won the fight. I came out slow. I rushed my punches. I didn't sit still. I was too hesitant. I started overthrowing the right hand, and I just couldn't adjust. I was rushing my punches. That's something I usually don't do. I couldn't let it go tonight. I was forcing my punches too much instead of sitting back, being patient and waiting it. I really wanted to get him out of there, give the fans what they want to see."

Fury, meanwhile, said: "We're on away soil. I got knocked down twice, but I still believe I won that fight. I'm being a total professional here. I went to Germany to fight Klitschko, and I went to America to fight Deontay Wilder. God bless America. The 'Gypsy King' has returned. That man is a fearsome puncher, and I was able to avoid that. The world knows I won the fight. I hope I did you all proud after nearly three years out of the ring. I showed good heart to get up. I came here tonight, and I fought my heart out."

With the fight result far from clear cut, there was immediate demand for a rematch, which took time to negotiate between the various interested parties. Both fighters occupied themselves elsewhere, as Wilder defeated Dominic Breazeale, and Fury beat Tom Schwarz, with both opponents stopped. Fury then faced what might have been his toughest opponent outside of Wilder, when he went all 12 rounds in a win over Swede Otto Wallin, and Wilder knocked out Luis Ortiz.

What happened in the build-up to Fury vs. Wilder 2?

The second fight was a mixture of drama and farce, laying the groundwork for controversy which would last into October 2021 - and rendering even the coronavirus pandemic to background music with the misgivings between the pair.

Once the dust settled on those four fights, the pair agreed to meet on February 22, 2020, at the MGM Grand in Las Vegas.

What happened in Fury vs. Wilder 2?

Wilder elected to go in for a dramatic ring walk, wearing armour and a helmet into the ring, wearing it for 15 minutes before the fight, and climbing into the ring with it. He would go on to blame the costume for tiring him out before he even began to exchange blows with Fury.

The fight started with Fury dominant and confident. While Wilder was far from shy, Fury’s speed kept him out of danger as he focused on his jab, before sending Wilder to the canvas with a fierce right. Wilder recovered to his feet, but struggled to get back to his best with blood coming from his ear.

Wilder was floored twice more, but the ref ruled them as slips, and the fight continued. Fury then sent Wilder to the canvas in what was ruled a legitimate knockdown in the fifth after a flurry of body shots.

Fury continued to press, with Wilder bleeding from his mouth as well. The end came when the American’s corner threw in the towel.

The event takes place on Oct. 9. Fury and Wilder are expected to make their ringwalks around 11:30 p.m. ET (4:30 a.m. BST). But those depend on the length on the undercard fights.

The fight can be seen be streamed on ESPN + PPV in the U.S. and on Fox Sports PPV through your local cable and satellite provider. In the United Kingdom, it can be seen on BT Sport Box Office. However, full confirmation and details are expected in due course.

In Germany, Austria and Switzerland, Fury vs. Wilder 3 can be streamed on DAZN.

Where is Fury vs. Wilder 3 taking place?

The fight will be held at the T-Mobile Arena in Las Vegas. Fury last fought there in 2019 when he decisioned Otto Wallin; Wilder will be fighting in the building for the first time — though he has competed in Las Vegas multiple times in the past, including the loss to Fury last time out.