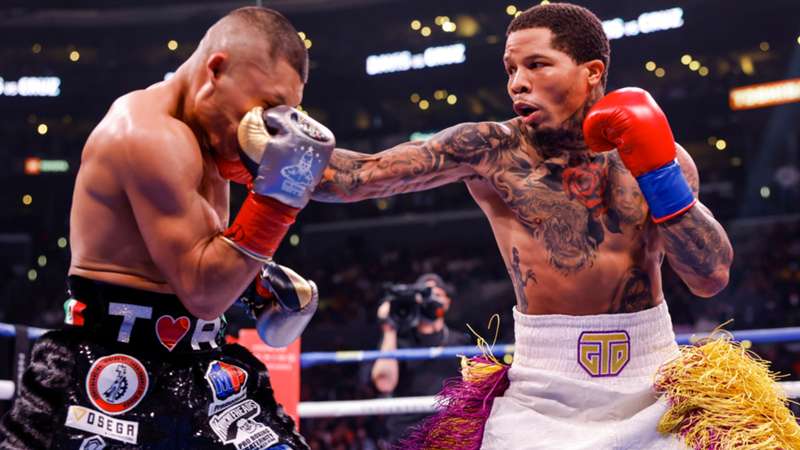 In front of a star-studded crowd of 15,850 at the Staples Center in Los Angeles, Davis got a much tougher than expected fight from Cruz but earned the victory by unanimous decision (116-112, 115-113, 115-113) to remain undefeated in 26 fights (26-0, 24 KOs). DAZN News scored the fight a draw, 114-114. Davis says he hurt his hand around the sixth round, which he felt prevented him from knocking out Cruz and extending his KO streak to 16. it was the first time Davis went to a decision since an October 2014 win against German Meraz.

“I hurt my hand, so I couldn’t get him out of there," Davis said in his post-fight interview with Showtime's Jim Gray.

The 23-year-old Cruz replaced Rolando Romero, who was pulled from the fight after being accused of sexual assault.

Cruz took Davis's hardest shots the entire fight despite the injury, didn't take a back seat, and never flinched. Instead, he continued to come forward, looking to inflict punishment on Davis. "Tank" landed the harder power shots but still couldn't put Cruz away in the early going.

The fight came down to the 12th and final round on two of the judge's scorecards. You could see that something was wrong with Davis' hand. Davis showed an excellent boxing IQ in snapping a stiff jab, an occasional right hand, and superb footwork. Cruz was reluctant in the early stages of the round, appearing confused with what Davis was doing. Finally realizing he needed to get going, Cruz started swinging wildly and missing more often than not. Cruz connected on a left hook with time winding down, but it was too little, too late in the judges' minds.

What is now next for Davis? He was criticized for his selection of Romero and then Cruz instead of taking on either Lopez, Haney, or Ryan Garcia. When asked about fighting Kambosos, Haney, Garcia by Grey, Davis side-stepped the question. Grey pressed again and Davis entirely dismissed both guys even though he's been facing lower caliber competition for most of his career.

"All those guys are easy work," Davis bluntly said. "I’m the top dog.”
Here is what happened at Gervonta Davis vs. Isaac Cruz.
0
NEW BLOG POSTS

A great fight. A tougher than expected fight. Davis said he hurt his hand in the sixth round which affected him. Not sure if its broken. He felt he could have put Cruz away if the hand was ok.

facebook twitter whatsapp
Left uppercut for Davis lands. Counter left from Cruz. Left to the body by Cruz. Two right hands to the body and then a right uppercut to the inside. Short uppercut stuns Davis.Cruz lands a right. RIght hook lands and then a left from Davis.

facebook twitter whatsapp
Hard left hook to the body from Cruz. He's making that a point of emphasis as his corner feels Davis wearing down a bit.

facebook twitter whatsapp
Cruz comes right in and pressures Davis and snaps a left hook upstairs. Cruz walks Davis into the ropes and lands a right to the body and another right. A left makes Davis stumble back. Another right to the body. Cruz narrowly misses a right. A left uppercut for Davis. A right hand staggers Davis, who was saved by the ropes. Couldn't ask for a better start if you're Isaac Cruz. (10-9 Cruz)

facebook twitter whatsapp
It's time for the main event as Gervonta Davis (25-0, 24 KOs) battles Isaac Cruz (22-1-1, 15 KOs) in lightweight action. The time for talking is over. Should be exciting for however long it lasts.

Not the most exciting fight at times but it had its moments. The best punch of the contest came in the final seconds as Garcia clipped Fundora with a left hook.

Not the type of performance Fundora needed on the big stage. Needed more of a spectacular performance. Styles make fights which did make it awkward more often than not.

facebook twitter whatsapp
As we head into the championship rounds, it's all Fundora. He's getting in first, throwing a very stiff jab and working the body well. Garcia is going to need a stoppage to win.

facebook twitter whatsapp
Fundora and Garcia are having fun in there. Fundora's been a little less active but throwing a lot of power punches. He needs to let the hands go a bit more. Like the fact Garcia knows he can't jab with Fundora and is going on the inside and going for broke. Have Fundora slightly ahead as we near the halfway point of the fight.

facebook twitter whatsapp
It's time for the co-main event of Davis vs. Cruz as Sebastian Fundora (17-0-1, 12 KOs) squares off with Sergio Garcia (33-0, 14 KOs) in junior middleweight action. Fundora is fun to watch and this should be no exception.

What a highly entertaining affair. It was back-and-forth for all 30 minutes with neither Adames and Derevyanchenko taking a backseat. It came down Adames landing the more powerful shots to dethrone the former three-time middleweight title challenger.

We have a new player at 160 pounds. A title shot next? Not a chance as he needs more seasoning before he takes on the big guns of the weight class.

facebook twitter whatsapp
Fireworks, and more fireworks from Derevyanchenko and Adames. They are sitting down on their shots and throwing with bad intentions inside the phone booth. Living up to the hype thus far. Hopefully, they can keep up the pace.