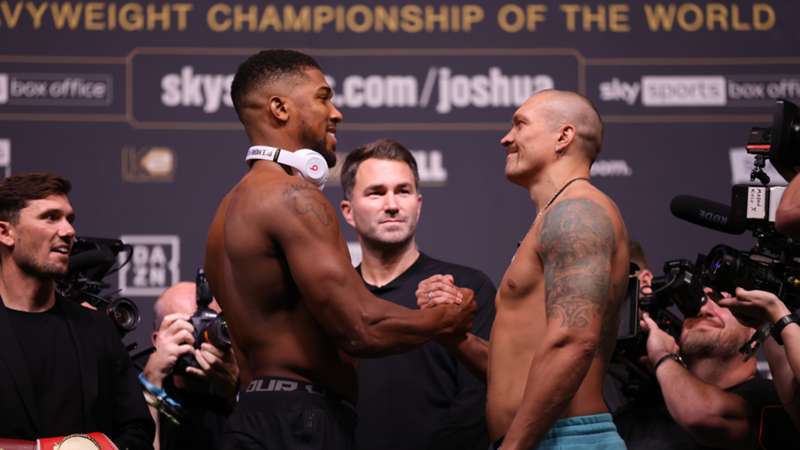 DAZN explains how weigh-ins work, what rehydration clauses and catchweights are, and more.

We explain how weight classes work - from the upper and lower limits, to what catchweights mean, and more.

How do weight classes work in boxing?

Weight classes are used to classify boxers of different weights. They are used in an attempt to make fair fights in stature between fighters of similar heights and ages. It is generally considered easier for older fighters to move up weight classes as weight becomes harder to lose, bone density increases, and muscle mass is retained.

There are upper and lower limits for each division, except for the heavyweight class where there is no upper limit.

There are traditional and ‘tweener’ divisions, with some established for many decades and some more recent, such as the bridgerweight division, that slots in between cruiserweight and heavyweight.

What are the weight divisions in boxing?

How do boxing weigh-in rules work?

Weigh-ins usually take place the day before a fight. The two athletes are weighed in order to make sure they are not over the pre-agreed limit - either a traditional weight class or a catchweight (explained below).

Because of the advantage given by a size and weight advantage, boxers may try to lose much of their weight in the days and hours before a fight so that most of it lost is by water-loss - which can be easily regained before the fight the next day.

Fighters may even attempt to be weighed naked in order to get in just under the limit.

Some governing bodies, such as the IBF, also have regulations that prohibit fighters adding more than a certain amount of weight in the hours after the fight.

Occasionally fighters can be granted additional time to make the weight on a second attempt after a couple of hours.

What are rehydration clauses?

Rehydration clauses are often used to limit the disparity between a boxer’s weight between the weigh-in and the start of the fight. It means that a fighter cannot gain more than a pre-agreed weight after the weigh-in and before the bout.

Because fighters can undergo extreme weight-loss as a result of dehydration in order to make the weight limit, they could gain in excess of 10 or more pounds before the fight actually begins.

That can be undesirable for a couple of reasons. One, extreme dehydration can put a fighter at long-term health risks over the course of his career, and in the short-term may leave him unable to fight properly the next day, risking injury. Secondly, even if he is healthy once he is rehydrated, that weight gain may be considered an unfair advantage by his rival or a regulating body.

Catchweights allow for agreements between fighters to take place at non-traditional weight limits. There are a number of ways and reasons this might take place.

One example may be to make a fight between two fighters who are reluctant to move to one class or another to meet a particular fighter, with the other competitor also unwilling to move in the other direction by such a distance.

For example a light-heavyweight at 175lbs might be uncomfortable losing the seven pounds to take on a super middleweight, and the 168lbs fighter may not want to attempt a further seven pounds increase. They could then agree to fight at 171lbs, which is not a traditional division limit, but would allow the pair to change their weights less drastically.

Catchweights can also be agreed to save a fight if one fighter fails to make the cut at the pre-agreed weight. If a lightweight fighter comes in at 136lbs, he may take a financial hit, and also give up any title that was on the line. But if the two want to fight nevertheless to ensure they fulfil their obligation to put on a show, a catchweight of 136 lbs may be used.

Another example may be when a fighter wants to fight within a traditional weight class, to challenge for a particular belt, but is only willing to do so if his opponent agrees to a non-traditional limit within the division. That could be because a smaller-framed boxer does not want to give a taller fighter a weight advantage. A welterweight pair may agree to fight at 145 lbs, for example.