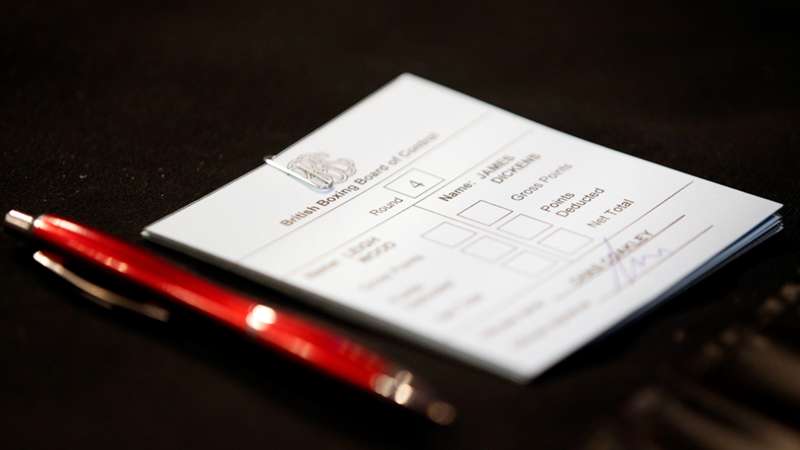 Boxing scoring can be confusing for some and highly contentious to many. Here's a rundown of the basics.

The sport of professional boxing has always appealed based on the promise of spectacular, dramatic and brutal knockouts. When a fighter can land a finishing shot or combo on their opponent to the point that they cannot continue, the contest comes to an immediate stop, regardless of how many rounds it was supposed to last.

However, if no knockout occurs and the bell sounds for the final time, how exactly do we decide a winner?

Scoring in boxing is more complex than, say, soccer, where whoever scores the most goals wins. As a result, it draws a much higher volume of controversy and debate.

If you're looking to figure out how it works, or want to clear up a particular part of the process, you've come to the right place.

Who scores a boxing fight, judges or referee?

In most bouts, three judges are seated at ringside to watch the fight up close. Those judges are approved by the same body that licences the fights, and when possible, are usually from a neutral location compared to the contestants. For example, if an American boxer is facing a French boxer, judges from Canada, Britain and Mexico may be preferred. Similarly, if a small British promoter has two English fighters face off and one is from Hull while the other is from London, perhaps judges from Manchester, Southampton, Cardiff etc.

A three-judge system is mandatory for championship fights. However, if a newly-turned professional is making their debut in a four-round fight, such fights are often judged by one person and one person alone: that bout's appointed referee,

How is the fight scored?

The modern boxing scoring system is known as the '10-Point Must System'. Here is a basic overview of how it works:

Are 10-10 rounds really allowed in boxing?

Yes! A judge has the right to score a round even, just as they do to score it 10-8 without a knockdown. Judges are encouraged to avoid it as much as possible, and to only use these scores if they truly feel it's the correct appraisal of that round. This urging is to ensure they are not overused. The 10-10 round in particular can become too easy a fallback option for judges.

Are points deducted for breaking the rules?

In addition to the above, the referee can instruct all three judges to deduct a point from a fighter in any given round. They will do so if a fighter has done something to break the rules, such as an intentional foul (low blow, headbutt, or Mike Tyson's favourite, biting an opponent's ear). A referee can also decide that a fighter has committed accidental fouls far too often than is acceptable, and deduct one point for the repeated offences.

What do boxing judges look for?

Here are the following areas in which boxing judges are encouraged to determine who 'won' or 'lost' a round:

If nobody has won via knockout after the scheduled number of rounds, the judges' round-by-round scorecards throughout the fight will determine the winner. With each round being worth a maximum of 10 points, that means a fighter can score as high as 120 in a 12-round fight, 100 in a 10-round fight and so on.

The three judges will each have an overall winner, or perhaps have scored the fight dead even. Here are the various results that can lead to: