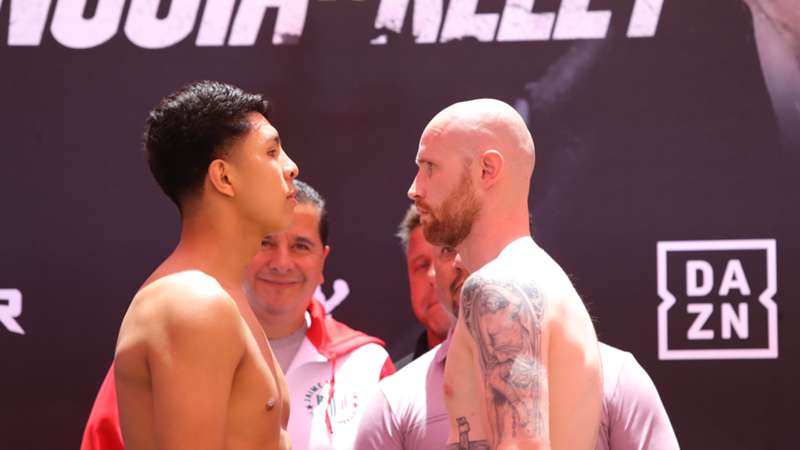 Munguia started off slow, but found a way to win resoundingly. He then had stinging words toward WBC middleweight champion Jermall Charlo.

Jaime Munguia started off slow. Then, during the fifth round, he introduced Jimmy Kelly to his game-changing power.

After arguably being down on the scorecards through the first four rounds, Munguia blasted a game Kelly with a left hook in the fifth frame. It was the first of three knockdowns that Munguia produced toward an emphatic fifth-round TKO at the Honda Center in Anaheim, Calif., and live on DAZN, on Saturday night. The victory spelled Munguia's 40th professional win as he improved to 40-0 with 33 KOs.

"I'm ready to go back to 160 (pounds) to fight for a world title or to move up to 168 pounds," Munguia told DAZN's Chris Mannix after defeating Kelly at a catchweight of 165 pounds. "I'm ready for any challenge."

He added in a warning shot call out to WBC middleweight champion Jermall Charlo: "Show some balls and stop hiding behind Al Haymon and come fight me."

For a few rounds Saturday night, it looked like Munguia wasn't deserving of a step up in competition against bigger names as the relatively-unknown Kelly timed punches early and caught the Mexican fighter off guard with left hooks.

After arguably being down by three rounds, Munguia found an opening to rock Kelly with a left hook in the fifth. The shot sent Kelly reeling back as he tasted the canvas. Although Kelly beat the count, Munguia deposited him back onto the mat — this time with a right uppercut to split his guard. A gutsy Kelly got up yet again but a power flurry from Munguia put him back down for the third time. Kelly made it up on his feet but the referee didn't see enough from the Brit to allow him to continue, ending the bout right there.

Munguia catches Kelly with a right to the ear. Munguia now pressing forward and the fighters get locked into a clinch. The referee warns them. They come out of the break and Munguia blasts Kelly with a huge left hook. Kelly tumbles backwards and tastes the canvas! He beats the count and is back up on his feet. He's battling back but Munguia splits his guard with a right uppercut and Kelly is down again! Kelly fights to get back up but is badly hurt. He doesn't have his legs under him. Forty seconds left. Kelly has his back against the ropes and Munguia is unloading. Kelly gets up at eight, but the ref doesn't see enough bearings from him to let this continue. This one is over! Kelly might have been ahead but Munguia made sure that changed!

Munguia vs. Kelly; Round 4

facebook twitter whatsapp
Munguia digging to the body before aiming upstairs. Again, it's Munguia to the body before going upstairs. Kelly is doing a good job of fighting in traffic and making sure his counter response to a Munguia punch is instant. Kelly now slaps Munguia with a left hook, brushing the Mexican fighter back slightly. Kelly is boxing confidently. Kelly catches Munguia again — this time with a lunging left. Munguia unloading some power shots but yet again it's Kelly countering sharply. Solid showing thus far from Kelly. (10-9 Kelly, 39-37 Kelly)

Munguia vs. Kelly; Round 3

Munguia vs. Kelly; Round 2

facebook twitter whatsapp
Big left hook rocks Munguia, who was definitely caught off guard there. Still, Kelly needs to be cautious. A left hook from Munguia now lands. Kelly snaps a left hook that connects at the bell. Another solid round for Kelly, though Munguia seems to still be working for his timing early on here. (10-9 Kelly, 20-18 Kelly)

Jaime Munguia vs. Jimmy Kelly; Round 1

facebook twitter whatsapp
Kelly putting Munguia on the back foot courtesy of early pressure. Munguia digs to the body with a power jab to the gut. Kelly, now, returning the same favor with a jab to Munguia's midsection. Kelly with a left hook that grazes Munguia's jaw before the Mexican fighter generates a short flurry during the waning seconds. A feeling-out round that Kelly takes. (Kelly 10-9)

Munguia, fighting at a catchweight of 165 pounds, should be able to do some damage.

Let's see how game Kelly can be tonight.

Jimmy Kelly makes his way to the ring 👀#MunguíaKelly pic.twitter.com/1evtncp2Ye

Showing plenty of heart, Bernaldez has himself his best round of the fight during the seventh behind a valiant power jab. However, Duarte goes back to loading up on shots during the eighth and catches Bernaldez up against the ropes with several unanswered punches, buckling the Filipino's legs and forcing the ref to stop the action for an eighth-round knockout win for Duarte. Solid victory.

facebook twitter whatsapp
Duarte is absolutely realigning Bernaldez's organs with these crushing body blows. To his credit, Bernaldez is responding to the ref's warnings to show him something with counter hooks that have even put Duarte on his back foot. Still, Duarte is up six rounds to none as we enter the seventh.

facebook twitter whatsapp
Again, it looks like Duarte's power display was going to make Bernaldez succumb, as his knees buckled in the fourth, but the gutsy Filipino survives.

facebook twitter whatsapp
When Duarte catches Bernaldez up against the ropes, he's absolutely teeing off, especially with thudding body shots. For a quick second, Bernaldez looked like he was ready to take a knee from several body shots but somehow managed to stay on his feet. Still, Duarte's commitment to the body is taking a major toll on Bernaldez as we enter the fourth round.

All Duarte through two

facebook twitter whatsapp
An accidental headbutt opening a cut over Duarte's left eye is about the only offense that Bernaldez offers in the second round. Duarte is suffocating him with major offense, whether it's pounding shots to the body or stinging punches upstairs. He's sitting on every punch.

facebook twitter whatsapp
It doesn't take long for Bernaldez to feel Duarte's power. Duarte loads up on a left hook that immediately weakens Bernaldez's legs in the opening round. Everything that Duarte is throwing is carrying some serious, stiff power.

Oscar Duarte vs. Mark Bernaldez in a 10-round lightweight tilt is upon us.

Judges see it 100-90 across the board for Yokasta Valle. Give Villalobos credit as she gave it everything she had in a game effort. Valle was just the sharper, better boxer. The Costan Rican fighter outclassed Villalobos and picks up yet another successful title defense. Valle tells DAZN's Chris Mannix that she's more than willing to unify titles with WBA champ Seniesa Estrada or any of the minimumweight titleholders for that matter.

Yokasta Valle is ready for the best 🍿 pic.twitter.com/vDtTdsM9HQ

facebook twitter whatsapp
Ref warns Villalobos late in the seventh round, "show me something" and the game challenger obliges with a left hook. Still, the ref could elect to put an end to this if Villalobos continues to take punishment.

facebook twitter whatsapp
Valle is having her way with Villalobos halfway through, landing shots at will. Villalobos needs to land something with heavy impact if she has any shot of making this a fight. Valle is pitching a shutout.

A cool and calm Munguia is in the building

facebook twitter whatsapp
Valle doubling and tripling up on her jab during round two — in firm control.