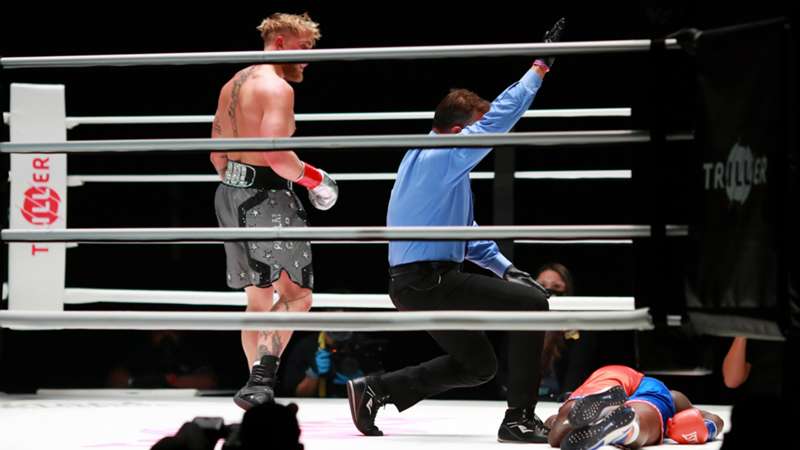 Jake Paul made quick work of the former NBA star.

The trash talk between Jake Paul and Nate Robinson was intense. Each guy vowed to finish the other in the co-main event of Mike Tyson vs. Roy Jones Jr. on Saturday night from the Staples Center in Los Angeles, Calif.

The 23-year-old Paul backed up his words, dropping Robinson three times to win by knockout at 1:35 of the second round. DAZN News had the fight scored 10-9 for Paul at the time of the stoppage.

It really wasn't much of a contest as Robinson came out looking to hold Paul instead of trying to actually fight. Paul kept his composure and attempted to set up his shots. The social media star finally got Robinson away from him long enough at the end of the first round, throwing a perfect overhand right that landed right behind Robinson's ear to send the former NBA star to the canvas. Robinson complained the punch was behind the head but the referee disagreed. Robinson made it out of the round but Paul made sure Slam Dunk contest winner didn't survive the second.

Paul (2-0, 2 KOs) continued to show his composure and not let Robinson's sloppiness get him off track. Robinson connected on a left jab but Paul made him pay with another right hand to send Robinson to the canvas once again. To Robinson's credit, he made it back to his feet. That didn't last long. Paul came right back and punctuated the fight when he hit Robinson with one final right hand to send the former three-point shootout champion face-first to the canvas and knocked out lying on the canvas with a bloody nose.

I don't know what Martin and Paz were watching but Tyson clearly won going away with his aggression, landing the harder punches and being more active. Jones was huffing and puffing for air by the end of the fourth round and through his post-fight interview while Tyson was fresh as a daisy the entire time.

For what it was, the fight was fun and entertaining. Tyson and Jones gave it their all for the entire 16 minutes and provided entertainment when the world right now can use a smile.

It was also good to see Mike Tyson look in the shape he came in and still moved around extremely well. Considering the place he was in when he lost to Kevin McBride in 2005, this version of 'Iron Mike' is one we can all love and adore.

facebook twitter whatsapp
A surprise so far as it has been highly entertaining. Both guys are giving it their all with Tyson having the edge. He's landing the harder, crisper shots and being the more active of the two.

Time for Tyson vs. Jones

Both Tyson and Jones say they are going to go at it and try for the knockout even though the California State Athletic Commission says it's supposed to be a 'hard sparring session.'

I see no lies

After knocking out former NBA star Nate Robinson tonight, @jakepaul says he wants @TheNotoriousMMA and/or @dillondanis next and predicts he’d knock both out. (📽 @triller) pic.twitter.com/eubdl9j3kE

That was no representation of the NBA Family lol

Robinson came out more composed and landed a jab but Paul was having none of it.

Robinson landed another jab and Paul landed a right hand to send him to the canvas. It appeared Robinson was done but made it back to his feet. That didn't last long as Paul connected on an uppercut, stepped back and then blasted Robinson with a vicious overhand right to send the former NBA player face-first to the canvas and the fight was immediately waved off. It took a while but Robinson, who had a bloody nose from the shots, did eventually make it onto his stool.

The fight went just as expected. You can tell Paul has some skill but can he show the patience to grow and take on legitimate competition?

That wasn't too pretty. Robinson kept lunging and wanting grab and hold while Paul is trying to box and knock him out.

Paul sent Robinson to the canvas at the end of the round as Robinson came rushing in and Paul connected on an overhand right behind Robinson's ear to send him to the canvas. Robinson attempted to survive and hold on and did make it through. Will be shocked if this makes it past the second. (10-9 Paul)

Paul has one professional fight on the resume, beating AnSonGib in the first round in January. Robinson will be making his pro debut after having an 11-year career in the NBA, playing for the likes of the Chicago Bulls, New York Knicks and the Boston Celtics.

The trash talk has been intense. Are we going to get a farce or an actual fight?

facebook twitter whatsapp
Jack def. McKernan via unanimous decision (80-72, 80-72, 80-72). Jack dominated from the opening bell and made it look rather easy. He was the superior boxer and showed why throughout. But give McKernan credit. He hung tough and ate an enormous amount of shots. But there are levels to boxing and Jack exemplified that.

Logan Paul cheering on his brother

The brother of Jake Paul, Logan, lends his support to his sibling.

facebook twitter whatsapp
Up next is Badou Jack (22-3-3, 13 KOs) fighting Blake McKernan 13-0, 6 KOs) in cruiserweight action. The trash talk in the build-up between Jack and McKernan has been great, Jack feels McKernan is a club fighter. Can McKernan prove him wrong.

Ortiz def. Segawa by knockout at 2:50 of the seventh round. A good back-and-forth slugfest that culminated with Ortiz landing a picture-perfect body shot to the liver to send Segawa down to one knee. Realizing he had Segawa ripe for the taking, Ortiz continued to pound the body until the referee stepped in to stop it. Ortiz runs his record to 14-0 with eight knockouts.

A great fight and really good action so far.

Nate Robinson getting support from the basketball world

Even though Robinson is no longer in the NBA, he's getting support ahead of his professional debut.

Ready to see if Nate Robinson going to address Jake Paul like the numbers on a house tonight!!!

What time is Nate fighting?

Nate Robinson letting everyone know how much this means to him.

Tonight I'm fighting for my brothers in the NBA, athletes across the world, and most importantly my children. #tysonjones #holdat pic.twitter.com/lkAqxRMBmQ

facebook twitter whatsapp
Rapper Wiz Khalifa began the night with a mini-concert playing some of his greatest hits. While he was performing, Khalifa was smoking a blunt. What a way to start things.

Jake Paul fires the first barb of the day

The social media star reminds everyone of tonight's festivities along with dribbling a basketball and a basketball chain with Robinson's name on it.

Speak of the Devil and he shall appear.

Tonight is the night. Tune in. 6pm PST. Link in bio. Or order the fight with your cable PPV and satellite providers #PRBLMCHILD pic.twitter.com/SAB4rLdBFb

It's going to be an intriguing contest, to say the least, so grab the refreshments, sit back, relax and enjoy an entertaining night of action.

facebook twitter whatsapp
Rapper YG is performing. I have to admit, I've never heard of him but he's growing on me quickly. Really good production so far and the mini-concers have been good and short.