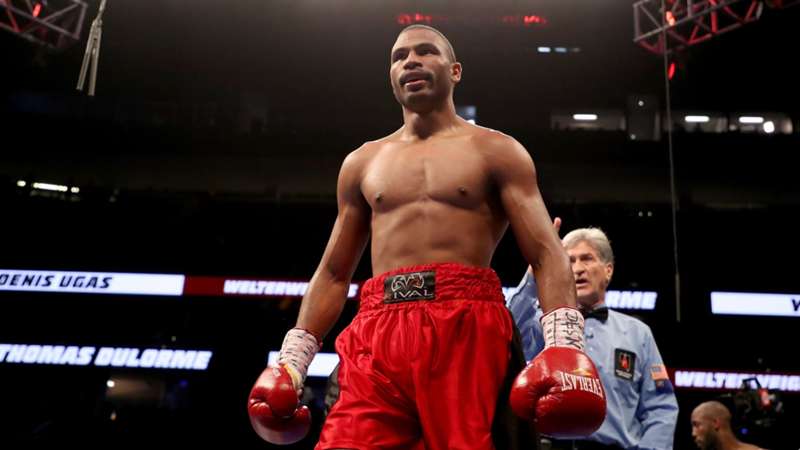 Jamal James and Thomas Dulorme will battle it out with the interim WBA welterweight title on the line Saturday night.

If Jamal James is going to prove that he's a legitimate threat at 147 pounds, this is his chance.

"Shango" faces Thomas Dulorme for the interim WBA welterweight title to headline the return of "PBC Fight Night" on Saturday night, live from the Microsoft Theater in Los Angeles.

Since suffering his only pro loss — a unanimous decision defeat to Yordenis Ugas in August 2016 — James (26-1, 12 KOs) has been on an absolute tear by delivering six straight victories. The 32-year-old from Minneapolis scored a unanimous decision over Antonio DeMarco during his last time out in July 2019. Now, he seems more than up to the task of getting past a battle-tested Dulorme to hoist the interim WBA welterweight crown.

"I'm excited and ready to be getting back in the ring after everything happening these last months," James said in a PBC press release. "Thomas Dulorme is a strong opponent and I feel that we will be giving boxing fans a great night of action. Training has gone extremely well and I am more than prepared to secure this victory."

The 30-year-old Dulorme (25-3-1, 16 KOs), who posted a unanimous decision win over Terrel Williams last September, has other plans.

"James is a good fighter, but I am on a different level and it will show on August 8," he vowed. "I will put on the best performance of my career and win the WBA title."

Will James sink his teeth into the interim WBA crown, or will Dulorme prove his best boxing is still ahead of him?

Here's everything you need to know about the James vs. Dulorme card.

When is Jamal James vs. Thomas Dulorme?

The James vs. Dulorme showdown takes place Saturday night, Aug. 8. The main card kicks off at 8 p.m. ET, with James and Dulorme expected to make their ring walks around 9:15 p.m. ET. Following the FOX PBC Fight Night broadcast, a full slate of bouts will take place on FS1 beginning at 10 p.m. ET, headlined by Mykal Fox vs. Lucas Santamaría in welterweight action.

James vs. Dulorme TV channel, live stream: How to watch

Fans can watch the James-Dulorme main card on FOX beginning at 8 p.m. ET. The undercard, which will follow it, can be seen on FS1 at 10 p.m. ET. Both can be live-streamed via the FOX Sports and FOX NOW apps or at FOXSports.com.

How much does James vs. Dulorme cost?

The James vs. Dulorme card is free if watching on TV on FOX. The undercard is on FS1, which is part of a cable, satellite or streaming subscription package.

Where is the James vs. Dulorme fight?

The fight takes place live from the Microsoft Theater in Los Angeles. This marks the first time that James and Dulorme will fight at the venue.