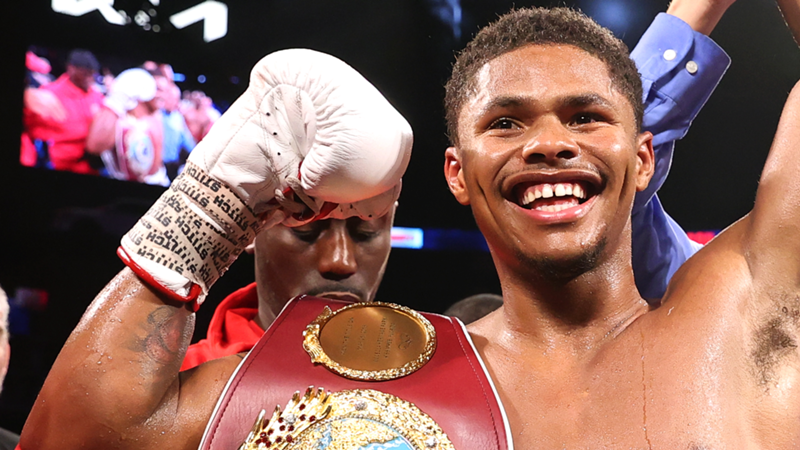 The younger Stevenson was too quick and sharp for the veteran Herring.

In a sport packed with plenty of bright young and hungry stars, Shakur Stevenson is staking his claim to be the best of them all.

Stevenson overwhelmed Jamel Herring in a brilliant performance toward a 10th-round TKO to become the new WBO junior lightweight champion at State Farm Arena in Atlanta on Saturday night.

From the opening bell, the 24-year-old Stevenson (17-0, 9 KOs) asserted his superior hand speed over the 35-year-old Herring. What began as a jab — quite possibly the best jab in boxing — quickly turned into three and four-piece sharp combinations that Herring had zero answers for.

Making matters worse for Herring was the fact that Stevenson even beat him on the inside, demoralizing the seasoned fighter with stinging power shots at will. Stevenson sending Herring off balance with a blasting right hook in the sixth round would serve as a precursor for the 10th.

That's when the Newark, New Jersey product made the gash over Herring's right eye worse, prompting the referee to have a ringside doctor take a look 25 seconds into the frame. Shortly after action resumed, Stevenson wrapped a left hook around Herring's guard to the head and followed that with a right hook the other way. Then came a stiff right hand up the middle and the referee stepped in to stop the action, crowning Stevenson as the new WBO junior lightweight titleholder and two-division world champion.

Although Stevenson insisted that he and Herring weren't friends leading up to the fight, the new champ had a change of heart after the bout.

Salute to Semper Fi - one of the most inspiring figures in boxing 🙏 pic.twitter.com/lErQgFDxUF

facebook twitter whatsapp
Hello and welcome to the live coverage of the Jamel Herring vs. Shakur Stevenson main card. Keep it locked here for all your live updates, results and highlights.