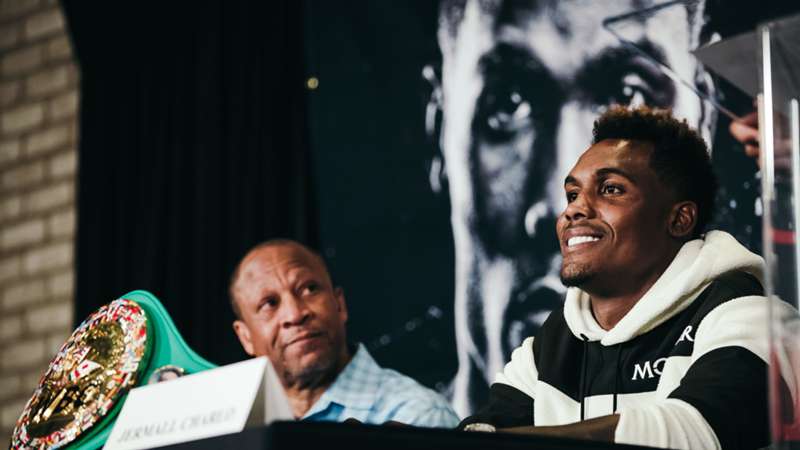 The WBC middleweight champion will make his decision following his fight with Dennis Hogan on Dec. 7.

It was almost as if Jermall Charlo was caught daydreaming.

He sat at the dias in the Dream Hotel Downtown in Manhattan to formally announce his WBC middleweight title defense against livewire contender Dennis Hogan at the Barclays Center in Brooklyn on Dec. 7. But — for a second — he took his eyes off the shiny green and gold belt that sat before him.

One could say Charlo’s days as the WBC champ are numbered, regardless of how his fight against Hogan transpires. The reigning titleholder predicted a knockout against Hogan on Dec. 7, vowing to “walk him straight into it.” From there, Charlo fully intends to secure a title unification bout with fellow middleweight Saul “Canelo” Alvarez, Gennadiy Golovkin or Demetrius Andrade. If he goes 0-for-3 with them, then Charlo wants a crack at former middleweight champion Daniel Jacobs. All four of the aforementioned boxers fight on DAZN, which has had a frigid relationship with the Premier Boxing Champions banner under which Charlo fights.

If he comes up blank across the board, Charlo says he has no issues packing his bags at 160 pounds and climbing up to 168 or higher, if need be.

“I’m going to take care of (Hogan),” Charlo said about his first line of order. “If I can’t get the Canelo fight, Golovkin fight or Jacobs or the Andrade fight, then I’ll try 168. If there’s nothing up there, then I go to 175 too. I’m 175 right now. I’m probably a little over right now.”

When asked which of the aforementioned fights is the most likely to happen, Charlo refused to answer.

“I don’t know which one would happen because (it would have already happened by now),” he said. “I got to do what I got to do. I’m trying to unify. I want to be one of the best boxers ever, so in order to be that you got to fight the best. I’m going to keep fighting. It’s not like I’m going to stop fighting if they don’t want to fight me.”

When pressed further about boxers of his generation moving up in weight, Charlo said he believes it’s simply a sign of the times. He sees what fellow middleweight world champion Canelo is doing on Nov. 2 — when he moves up two weight classes to challenge WBO light heavyweight champion Sergey Kovalev — and understands.

“That’s just like the new thing in boxing right now,” Charlo said. “Weight classes are starting to not matter as much.”

What does matter to the Dallas native is this Hogan fight. Charlo knows he can’t suffer a letdown against Hogan, who gave Jaime Munguia everything he could handle in April. Some boxing pundits feel like the Irish fighter should have won the bout, which was declared a majority decision in favor of Munguia.

Charlo believes laying the groundwork with this fight will ensure a career-defining 2020, when he and his twin brother — and former junior middleweight champion Jermell — turn 30.

To do that, time is of the essence when attempting to secure these marquee fights.

“We have no time to wait,” Charlo said. “We’re ready to fight whoever’s out there. We’re not trying to wait no longer.”