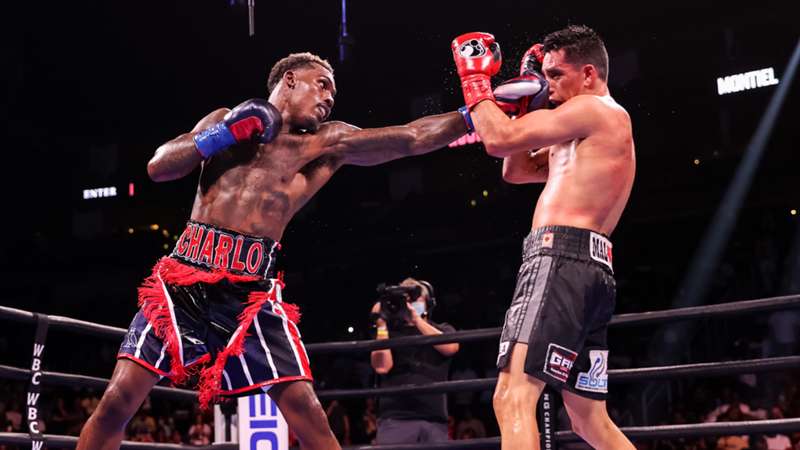 Jermall Charlo did what everyone anticipated.

Montiel fought tougher than expected to make it entertaining, but Charlo's power and precision proved to be too much as he won via unanimous decision (120-108, 119-109 and 118-109) to retain the WBC middleweight title at the Toyota Center in Charlo's hometown of Houston. DAZN News scored the fight 117-111 for Charlo.

“It takes a real warrior to get into the ring with me," Charlo said during his post-fight interview. "I can tell in his eyes he’s a true warrior from the beginning. He wanted to fight."

Charlo came right out and established the power jab to let Montiel know he wasn't going waltz right in and attempt a knockout. Once Charlo got the jab going, he started to find a home with the left hand and the straight right that began to take effect as the rounds went on.

It looked to be the beginning of the end in the fifth round, when Charlo connected on a sharp right hand that staggered Montiel for a moment. Charlo smelled blood and unloaded a barrage of lefts and rights in the corner. Somehow, Montiel escaped the corner and landed a left.

Then, in the sixth round, Charlo continued the onslaught. A right hand staggered Montiel again. Charlo unloaded the kitchen sink, but Montiel told him to bring it on, though he was unsteady on his feet. Charlo blasted two right hands, which bounced off Montiel's face. Charlo uncorked a five-punch combination and a sharp left hook late in the round. It only appeared to be a matter of time before he'd stop Montiel.

But to Montiel's (22-5-2, 22 KOs) credit, the native of Mexico fought valiantly. He continued to come forward and kept firing away. He even caused a cut over Charlo's eye in the eighth round and hurt Charlo in the 11th round with a body shot. But Charlo always had an answer with one power shot after another to let Montiel know there are levels that he wouldn't reach on this evening.

"Golovkin is about to unify, so maybe we can fight for all those belts he’s going to get, or I’ll fight the winner," Charlo continued on if it's realistic that he'll fight Golovkin."

Here is what happened at Jermall Charlo vs. Juan Macias Montiel.

facebook twitter whatsapp
A jab and a left hook to the body for Charlo. A left from Montiel. Another left by Charlo. A straight right gets through for Charlo. (10-9 Charlo, 70-63 Charlo)

facebook twitter whatsapp
Three straight jabs by Charlo. A right hand staggers Montiel yet again. Charlo is unloading the kitchen sink. Montiel tells him to bring it on. Montiel is unsteady on his feet. Two right hands bounce off Montiel's face. Montiel comes back with two left hands. A left to the body from Montiel. A five-punch combination by Charlo. A sharp left hook by Charlo at the end of the round. Montiel is saved by the bell. Looks to be a matter of time. (10-9 Charlo, 60-54 Charlo)

facebook twitter whatsapp
Left splits the guard for Charlo. A right hand staggers Montiel for a moment. Charlo smells blood and unloads a barrage of lefts and lefts in the corner. Montiel escapes the corner with a left. A couple of left hands find the target for Charlo. (10-9 Charlo, 50-45 Charlo)

facebook twitter whatsapp
A one-two from Charlo. A right hand lands by Charlo and catches Montiel's attention. A left hook and uppercut lands for Montiel. Charlo comes back with a right and a left of his own. Montiel lands a right hand. A counter uppercut by Charlo. A left to the body from Charlo. A straight right snaps Charlo's head back. Best round of the fight so far. (10-9 Charlo, 30-27 Charlo)

facebook twitter whatsapp
Charlo digs a right hand to the body. Right back with a double jab for Charlo. Montiel staying in the southpaw stance for the entire second round thus far as Charlo continues to stalk him. Montiel winding the left hand up but doing nothing with it. The crowd is letting Montiel know they don't appreciate the antics. Another right to the body for Charlo. A sharp double jab by Charlo. Montiel swings and misses while Charlo lands a left. (10-9 Charlo, 20-18 Charlo)

facebook twitter whatsapp
Charlo comes out firing the jab. Montiel switches to the southpaw stance. Not much action. Charlo is pumping the jab and keeping Montiel against the ropes. A left hand by Charlo and Montiel comes back with a left hook. (10-9 Charlo)

It's time for the main event as Jermall Charlo (31-0, 22 KOs) puts the WBC middleweight title on the line against Juan Macias Montiel (22-4-2, 22 KOs). Can Montiel pull off a shocker in Charlo's hometown?

facebook twitter whatsapp
Cruz def. Vargas via unanimous decision (100-89, 99-90, 97-92). Pretty dominant performance from Cruz. He landed the harder, crisper and dominated from start-to-finish. The fight should have been stopped. A more experienced referee would have waved it off. Cruz runs his unbeaten streak to 18. Definitely someone to watch out for at 135 pounds.

facebook twitter whatsapp
Cruz comes out firing but Vargas is right there with him. A right hand sends Vargas to the canvas. Why hasn't this been stopped? Vargas cannot see.

Climactic round 10 as Cruz sends Vargas to the canvas in the final minute #CruzVargas pic.twitter.com/6OI8CdoWxW

Vargas' right eye is practically closed shut. The referee stops the fight with 30 seconds remaining and takes Vargas to the ringside doctor. The referee tells him the fight should be stopped. The doctor looks up at the clock to see how much time is remaining. He lets Vargas continue. A horrible call as that fight should have been stopped.

Vargas inching himself closer into the fight

facebook twitter whatsapp
Vargas won the sixth round by landing a couple of hard uppercuts and being more active of the two.

Cruz in control at the halfway point

facebook twitter whatsapp
While the fight is exciting, Cruz has done a little more in each round to pull ahead. Cruz's shots are having more of an impact. Can Vargas turn it around?

Fun scrap by Cruz and Vargas

facebook twitter whatsapp
Cruz and Vargas are providing plenty of action through three rounds. Both guys are coming forward and not taking a back seat. Can they continue the pace?