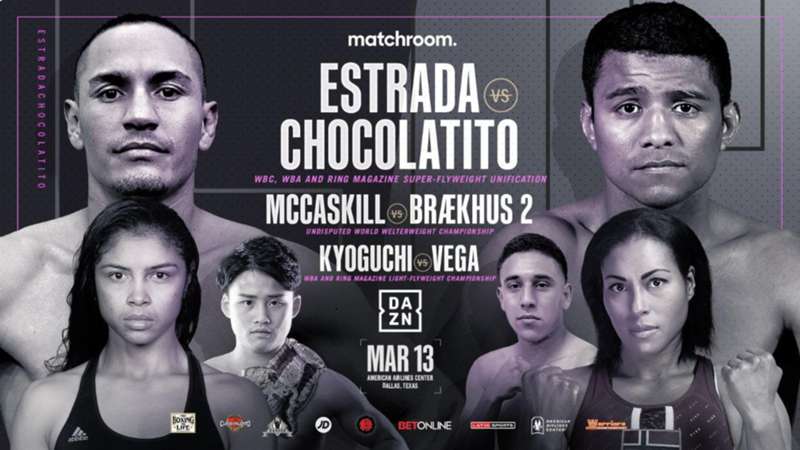 The huge undisputed title fight will provide chief support for another eagerly-anticipated rematch on March 13 in Dallas.

Jessica McCaskill and Cecelia Brækhus will again do battle for the undisputed women's welterweight championship of the world on Mar. 13 at the American Airlines Center in Dallas, live all around the world on DAZN.

McCaskill (9-2, 3 KOs) surprisingly dethroned the previously-undefeated Braekhus (36-1, 9 KOs) via majority decision on the streets of downtown Tulsa, Oklahoma on Aug. 15, preventing the Norwegian from making it 25 successful world title defences in a row.

Now a two-weight world champion just 11 bouts into her professional career, the American will now grant the return bout in her first defence of all the women's belts at 147lb and is determined to prove the first fight was no fluke.

“I’m very focused on regaining all of my undisputed belts on March 13 in the rematch against Jessica,” said Brækhus. “It will be a very special night in Dallas for my supporters and for all of my worldwide fans who can watch the fight on DAZN.”

The fight will slot in beneath another big rematch, as Juan Francisco Estrada and Roman 'Chocolatito' Gonzalez run it back for the WBA (Super), WBC and The Ring super-flyweight titles over eight years after much younger versions of the exciting fighters went at it for the first time.

Also confirmed for Mar. 13 in Dallas was a third world championship fight, as new Matchroom Boxing signing Hiroto Kyoguchi (14-0, 9 KOs) will defend his WBA and The Ring light-flyweight titles against Axel Vega (14-3-1, 8 KOs).

Kyoguchi will make his third defense of the WBA crown having stopped Heikke Budler for the strap in December 2018 to become a two-weight titleholder before conquering Tanawat Nakoon and Tetsuya Hisada in June and October of 2019.

"I’m very happy to make my debut in the US under the guidance and management of Eddy Reynoso and with my promoter Eddie Hearn and Matchroom," said Kyoguchi.

"I want to thank them for the chance to prove that Japanese boxing is the best in the world. I am very grateful to them and we will put everything into becoming a star in the boxing world."

“I’m very happy to receive this world title shot,” said Vega. “Kyoguchi is a great champion but I’m a hungry young contender and will conquer the championship on March 13.

"I want to thank my promoter Tuto Zabala Jr (All Star Boxing) for turning around so quickly, one week after signing and here is my chance, also to my manager Joe Gonzalez and to Eddie Hearn.”

News on ticket sales and their prices will be made by Matchroom in due course. Dallas is expected to allow them to welcome a fraction of the arena's full capacity into the building on fight night, in full compliance with the latest COVID-19 guidelines.

“This is a huge night of boxing in Dallas,” said promoter Hearn. “Cecilia and Jessica will put it all on the line in their rematch for the undisputed welterweight title and Hirotu is a fighter that I am excited to see explode onto the big stage under the guidance of his manager Eddy Reynoso and Matchroom.

“With a brilliant main event in the rematch between Estrada and Chocolatito and plenty of young talents to be added to the card, this is an unmissable feast of fights for the fans in Dallas and on DAZN.”