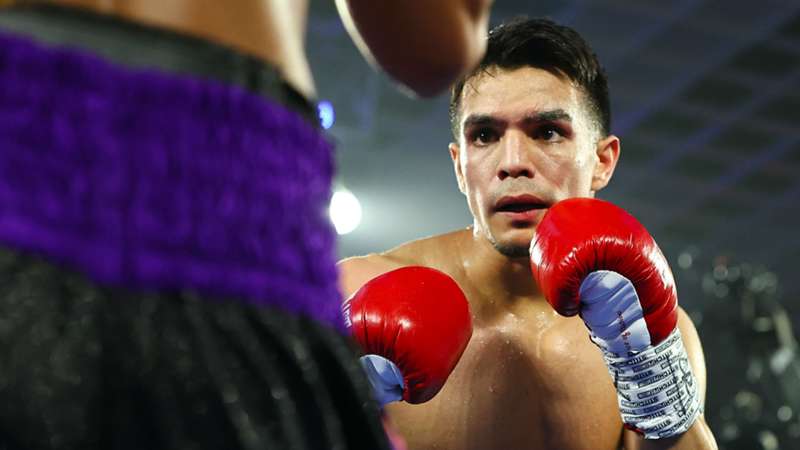 Jose Zepeda cruised to a unanimous decision victory over Kendo Castaneda in the main event of Top Rank’s card at the MGM Grand Conference Center in Las Vegas on Tuesday.

Zepeda — who pushed current WBO and WBC lightweight champion Jose Ramirez to the limit in a February 2019 majority decision loss — was initially slated to face Ivan Baranchyk, but an injury to Baranchyk forced him out of the fight. In his place, on seven days' notice, was Castaneda, who was game but not as skilled as his opponent.

Much of the 10-round fight was fought on Zepeda's terms. He routinely beat Castaneda (17-2) to the punch throughout the first half, and it felt as if the 31-year-old could pick up the pace and look for a finish in the second half with Castaneda unable to inflict much damage.

Instead, the slick southpaw appeared to take his foot off the gas and play it safe to secure the victory in this fight, which was contested at a catchweight of 144 pounds to accommodate Casteneda stepping in at the last minute. With an opportunity to leave an impression on the 140-pound division, Zepeda decided against taking more risks in order to make a statement with a stoppage.

He was never in danger and demonstrated the skills necessary to give any of the champions of the division trouble.

"Anybody with a belt at 140 pounds is who I want to fight," Zepeda said. "A championship fight is my goal, and that is what I am working towards."

Luis Alberto Lopez (21-2) pulled off an upset against Andy Vences (23-2-1) with a split-decision victory in a 10-round junior lightweight co-main event. It was a nip-and-tuck affair throughout, but Lopez had his way with Vences in the sixth round, when he nearly finished him with a brutal series of punches. Vences stayed in the fight and then fought back to keep it close in the later rounds.

Lopez earned two scorecards of 96-94 while the third judge saw it 96-94 in favor of Vences.

Andres Cortes (13-0) survived a fourth-round knockdown to take a unanimous decision over Alejandro Salinas (10-4) in an entertaining lightweight bout scheduled for eight rounds. Despite the knockdown, Cortes was the busier and more accurate fighter who won with scores of 76-75, 79-73 and 77-74.

Gabriel Muratalla improved to 4-0 and went the distance for the first time in his career with a unanimous decision victory over Sergio Lopez (4-6-3) in four-round bantamweight action. Scores were 40-36, 40-36 and 39-37.