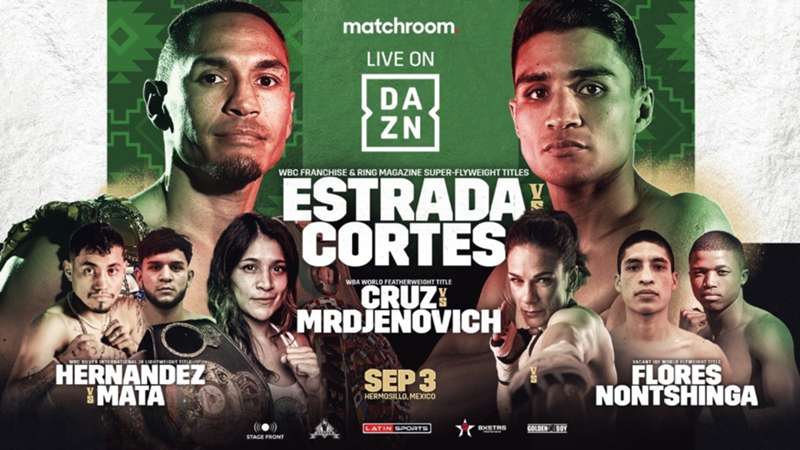 Juan Francisco Estrada makes his highly anticipated return to the ring defending his WBC Franchise and Ring Magazine World Super-Flyweight titles against Argi Cortes on Saturday September 3 from Centro de Usos Multiples in Hermosillo, Mexico and broadcast live to all subscribers worldwide on DAZN – topping a World title triple-header as Erika Cruz and Jelena Mrdjenovich meet in a rematch for the WBA World Featherweight title rematch and Hector Flores and Sivenathi Nontshinga clash for the vacant IBF World Flyweight title

Fans will be thrilled to see Estrada (42-3 28 KOs) make a welcome return to the ring, with the Mexican back through the ropes for the first time since edging out Roman ‘Chocolatito’ Gonzalez in their epic rematch in Dallas in March 2021. ‘El Gallo’ welcomes Cortes to his hometown and the same arena he stopped Dewayne Beamon in August 2019, and the Hermosillo hero will want to put on another show for his fans. Cortes (23-2-2 10 KOs) lands the biggest fight of his career in his 28th pro outing, with the Mexico City man aiming upset his fellow countryman and become a household name overnight.

There are two more World title bouts on the bill, starting with the long-awaited rematch between Cruz and Mrdjenovich for the WBA World Featherweight title. Cruz (14-1 3 KOs) ripped the title from long-time champion Mrdjenovich (41-11-2 19 KOs) in April 2021, with the Mexican ending the five-year rule of the Canadian on the cards after an accidental headclash halted the contest after seven rounds. Cruz successfully defended the belt in Puerto Vallarta in November via split decision over Melissa Esquivel, while the former champion returns for the first time since the first battle.

The vacant IBF World Flyweight title is on the line between unbeaten pair Flores and Nontshinga. Both men taste their first World title action as Tijuana’s Flores (20-0-4 10 KOs) builds on his victory over Welsh World title challenger Jay Harris in Wales in November, while hard-punching Nontshinga (10-0 9 KOs) fights outside his native South Africa for the first time and comes into the bout on the back of his first points win in his tenth bout having beaten his previous nine foes inside the distance.

Also featuring on the card is Super-Featherweight dangerman Eduardo Hernandez, defending his WBC Silver International title against Jorge Mata. Hernandez (32-1 29 KOs) pulled off a stunning victory last time out, blitzing Jorge Castaneda inside a round in Guadalajara in June to land the title he defends against Mata (14-0-2 10 KOs), the unbeaten 21 year old Tijuana native who fights for his first pro title.

“It’s great to be back and I’m very excited that I’ll get to fight in front of all the Sonoran fans and in front of my growing family,” said Estrada. “Thanks to all those who helped make this happen. Whenever two Mexicans go at it you can always expect a war and this fight against Cortes will be another great Mexican battle in Hermosillo. We’re ready to put on another great show and get back in action to show the fans that El Gallo is one of the best in boxing.”

“I’m very excited for this great opportunity to fight Estrada,” said Cortes. “I will give everything I have for the victory; I will surprise the world. I have Mr. Nacho Beristain on my corner and we have a great game plan to defeat a legend like Estrada.”

“I am so excited to get back in the ring,” said Cruz. “I want to retire Jelena once it for all and go after the unification fight!”

“I’m really excited to get back into the ring again,” said Mrdjenovich. “We have been working hard to put this fight together for some time and I want to thank Eric Gomez for closing the deal finally.

“Training has been fun and exciting again. I am looking forward to coming to Mexico to get my belt back in a big way.”

“This is the opportunity that I have always dreamed of, and I will make the most of it,” said Flores. “It gives me more motivation for to bring it to Mexico and with the aim of giving Mexico and Tijuana a new World champion.”

“Am looking forward to this contest,” said Nontshinga. “I have been training very hard for this and look forward to becoming World Champion in Mexico.”

“I'm in a very good place mentally, emotionally and physically,” said Hernandez. “My team has been keeping me active and that's all I wanted, God willing after this win I want to take on the biggest names in my division.”

“I’m currently at my best and this is a long-waited opportunity for me,” said Mata. “I have a lot of respect for Rocky Hernandez, but this is my time to show the world what I’m made of. I am ready to be at this level, I will win no matter how.”

“This is a brilliant line-up for what promises to be another explosive night of action in Mexico,” said promoter Eddie Hearn. “It’s great to see Juan Francisco back in the ring at a time when the Super-Flyweight division is just stacked with great fights, and I expect him to lay down a marker as the top dog in Mexico.

“Erika and Jelena have been itching to get the rematch on and they will leave it all in the ring, there’s a golden opportunity for either Hector or Sivenathi to take a seat at the top table at 108lbs and ‘Rocky’ Hernandez always brings fireworks when he steps through the ropes. Our shows in Mexico have delivered must-see action from first bell to last, and I expect more of the same on September 3.”

“We are thrilled to have Estrada back fighting again on DAZN,” said Joseph Markowski EVP DAZN Group. “He will join some of the biggest names in the sport fighting on DAZN in 2022 with Usyk vs. AJ this Saturday, Canelo vs. GGG trilogy fight on Sept 17, and perhaps the biggest UK fight this decade in Eubank Jr vs. Benn in October. All these and more will be shown live this fall on DAZN.”