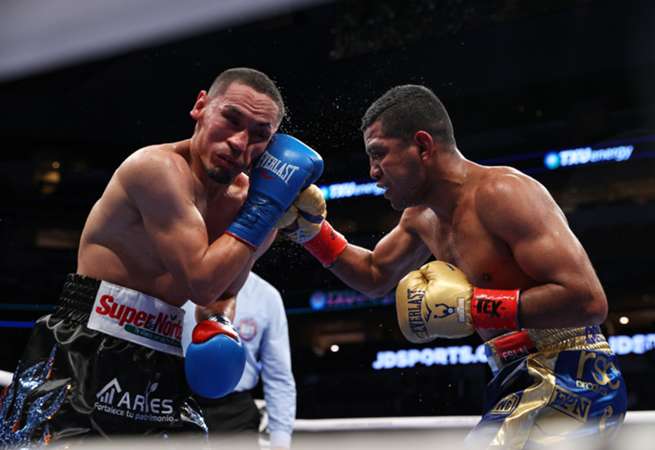 Another razor-sharp decision in favor of "El Gallo."

Another fight, another war.

Juan Francisco Estrada rode a hot start and produced a sharp 12th round to edge Roman "Chocolatito" Gonzalez by majority decision to claim the vacant WBC super flyweight championship in their trilogy fight Saturday night. Judges at the Desert Diamond Arena in Glendale, Arizona, scored it 114-114, 116-112 and 115-113 to give Estrada his second straight razor-sharp decision over the future Hall of Famer. DAZN News scored the fight 115-113 for Estrada.

On Saturday night, "El Gallo" came out as the sharper fighter, peppering Gonzalez off the back foot with well-timed punches and even potshotting the legend who looked sluggish and a step behind his younger opponent.

However, toward the middle of the fight, "Chocolatito" began to assert his will with nonstop pressure on Estrada to wildly swing the bout in his favor. While Estrada boxed well off the back foot early, Gonzalez's forward-fighting pressure began to smother the Mexican fighter as the Nicaraguan warrior started banking round after round to tighten up the fight on the scorecards.

As it came down to the 12th round, Estrada made sure that "Chocolatito" wasn't able to summon a comeback as he got the better of the exchanges with sharper output to take the final frame.

facebook twitter whatsapp
Judges score it 114-114, 116-112 and 115-113 both for your winner by majority decision and new WBC super flyweight champion of the world, Juan Francisco Estrada.

facebook twitter whatsapp
Estrada comes out with a whipping right-left combo. Another combo follows seconds later. Right lands for Estrada but "Chocolatito" drives forward and is connecting with solid shots. More forward pressure from "Chocolatito." Both fighters are fatigued. Gonzalez doubles up on the left jab. Right uppercut from Estrada though "Chocolatito" keeps moving forward, throwing and landing. Thirty seconds left. Fire fight breaks out. Estrada hurts "Chocolatito" to the body. Both fighters showed great heart with Estrada taking this round ever so slightly though it could have been scored the other way without argument. (10-9 Estrada, 115-113 Estrada)

facebook twitter whatsapp
Estrada looking sharper early but "Chocolatito" cuts off the ring and is tagging Estrada with lefts and rights. He has Estrada on the back foot yet again and continues to pressure with more fire. He digs to Estrada's body, then goes upstairs with a combo. A left to the body and right upstairs follows. Estrada counters with a few shots now. Estrada with a flurry that connects. Closer round but "Chocolatito" with another one. (10-9 "Chocolatito," 105-104 Estrada)

facebook twitter whatsapp
Gonzalez smothering Estrada now. Estrada peppers Gonzalez to the body. He goes across Gonzalez's face with a left hook but eats a few shots the other way. "Chocolatito" slips and falls. The ref checks on him and he's back to giving chase. Back-to-back combos from Gonzalez, who's pouring it on. He's not letting Estrada breathe and is sitting on his punches well. Left-right combo stings Estrada, who tries to counter. Left-right-left combo from "Chocolatito." Estrada ends the round well but Gonzalez takes this round, too. (10-9 "Chocolatito," 96-94 Estrada)

facebook twitter whatsapp
Gonzalez again showing pressure as he peppers Estrada with shots. Estrada fires back although Gonzalez has slowed down his crispness due to his pressure and the fact that the veteran is now sitting on his punches a lot better. "Chocolatito" continues the pressure, locking Estrada in the phonebooth where he blasts him with a punch to the gut and a combination upstairs. Classic "Chocolatito." Gonzalez is pouring it on, letting his hands fly. Left-right combo lands for the future Hall of Famer. Estrada with a brief flurry but "Chocolatito" takes another round convincingly. (10-9 "Chocolatito," 87-84 Estrada)

facebook twitter whatsapp
"Chocolatito" turning up the pressure and landing shots with Estrada on the ropes. He's relentless with his forward movement as he lands a right. Multiple-punch combo split between upstairs and downstairs as perhaps Gonzalez has fully warmed up. He connects on a right across the face. Right uppercut from Estrada lands but "Chocolatito" fires back. Stellar right-left combo from Gonzalez in his best round of the night. (10-9 "Chocolatito," 78-74 Estrada)

facebook twitter whatsapp
Estrada digging to the body well before aiming and landing upstairs. That was a multiple-punch combo that went unanswered. Now, "Chocolatito" fire backs and opens up with his offense. But Estrada comes right back and blasts Gonzalez with a right across the face. (10-9 Estrada, 69-64 Estrada)

facebook twitter whatsapp
Gonzalez's corner rips him in between rounds, imploring the Nicaraguan to show more urgency, reminding him how great he is although he's not looking like it at the moment. Left hook from Estrada. Right hook from "Chocolatito." Left hook from Gonzalez lands. Gonzalez looks a bit sluggish and slightly off balance. (10-9 Estrada, 59-55 Estrada)

facebook twitter whatsapp
Estrada wraps a right hook around Gonzalez's guard. He continues to fight well on the back foot, moving stealthly and efficiently. He's potshotting "Chocolatito" sharply. Right brushes Gonzalez back. And another knocks him off balance. A body punch opens up a head shot for "Chocolatito" who needs to do more of that. Big right from Gonzalez but Estrada remains the more active, sharper boxer. (10-9 Estrada, 49-46 Estrada)

facebook twitter whatsapp
They briefly exchange fire with "Chocolatito" showing more aggression after a slow start. He connects on a glancing right. Left-right combo lands for "Chocolatito," who's increasingly giving more chase as he cuts off the ring. He doubles up on a left hook with Estrada on the ropes although Estrada is countering well on the back foot. They butt heads again. Overhand right lands for Estrada. Fire fight breaks out with both fighters catching each other cleanly. A close round with the edge going to "Chocolatito." (10-9 "Chocolatito," 29-28 Estrada)

facebook twitter whatsapp
Now "Chocolatito" working to cut off the ring. He lands a left but eats two right crosses seconds later. Estrada opening up with his hands a bit, letting them go a bit more. Body attack from Estrada now followed by an uppercut. Thumping left to the body from Estrada. Left-right upstairs lands flush for "Chocolatito." Left to the body and a right upstairs from Estrada. They tap gloves after clashing heads late. (10-9 Estrada, 20-18 Estrada)

Juan Francisco Estrada vs. 'Chocolatito' 3; Round 1

facebook twitter whatsapp
Estrada already crouching, going to the body. He fakes to the body and grazes Gonzalez  with a right hook. A straight right sneaks through, too. Estrada already has "Chocolatito" on the back foot courtesy of the end of his jab. "Chocolatito" connects with a right. A cautious first round from both fighters thus far with Estrada the more active. Left grazes Gonzalez. (10-9 Estrada)

Estrada looks loose and has the support of the Glendale, Arizona crowd.

facebook twitter whatsapp
Rodriguez tells DAZN that he has interest in fighting Julio Cesar Martinez and Sunny Edwards in the flyweight division in 2023 but that he already is eyeing the WBO title first. "Bam" also adds that it's going to be hard to make a fight with "Chocolatito' happen.

Main event is upon us

Roman "Chocolatito" Gonzalez scored a unanimous decision over Juan Francisco Estrada in their first clash back in November 2012.

Last March, the future lock Hall of Famer lost a controversial split decision to Estrada after the two combined for over 2,500 punches.

And now, it comes down to the trilogy!

The trilogy boxing fans have been waiting for STARTS NOW 🥊#EstradaChocolatito3 pic.twitter.com/iTuhArZA4F

The champ gets the win and Eddy Reynoso has the opportunity to build and develop his fighter further from this.

Martinez vs. Carmona; Round 12

facebook twitter whatsapp
Fighters tap gloves. Carmona isn't letting go of that right hand. Martinez with a sweeping left uppercut. He adds in a left-right combo seconds later. Martinez lunging with two wild left hook attempts that both miss. Halfway through the round. A stiff flurry from Carmona lands as he finally did use that right but he got caught on the back end from the champ for his efforts. Under a minute remaining. Carmona is standing in the pocket as he deposits shots to the champion's body now. A better round for Carmona. He wins this round and had a great start to this fight. However, after hurting his right hand, Carmona gave away too many rounds to Martinez. (10-9 Martinez, 116-112 Martinez)

Martinez vs. Carmona; Round 11

facebook twitter whatsapp
The champ lunges forward with a left before burying a right into Carmona's body. He catches Carmona flush before the challenger returns fire. Martinez again to the body before going upstairs with a left that he steps into with power. "El Rey" is turning it up a bit. Right lands for the champ. Carmona counters with a left. Carmona on his bike during the waning seconds, irking Martinez who looks down at the canvas before heading to his corner. (10-9 Martinez, 106-103 Martinez)