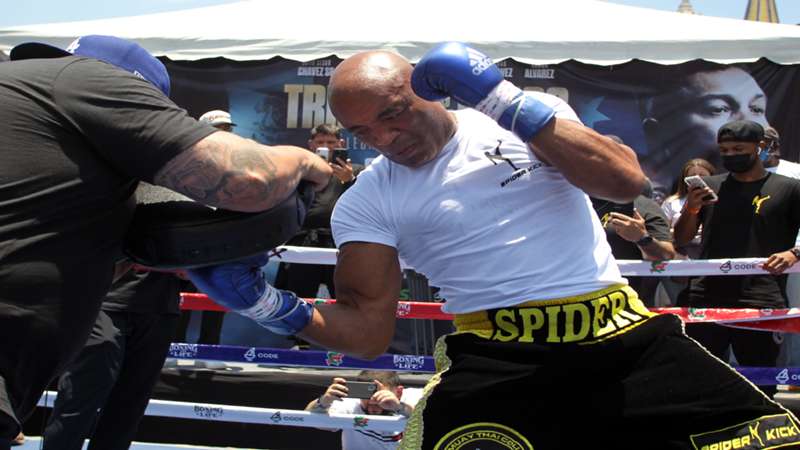 The former UFC champion and legend steps back into the boxing ring against the embattled Julio Cesar Chavez Jr.

One of MMA's all-time greats makes his return to the boxing ring for the first time in nearly 16 years on Saturday when Anderson Silva takes on Julio Cesar Chavez Jr. from Jalisco Stadium in Guadalajara, Mexico.

Also on the card, a special exhibition bout will occur as Julio Cesar Chavez makes his final appearance in the ring against Hector Camacho Jr.

Silva is a former UFC middleweight champion and is considered by some as the greatest fighter to ever step into the Octagon. His final run didn't go as planned, as Silva lost five of his last six bouts, including his swan song when he was defeated by Uriah Hall via fourth-round TKO in October. With the hunger to still compete, "The Spider" returns to the "sweet science," where he's 1-1 (1 KO). The last time Silva stepped through the boxing ropes, he knocked out Julio Cesar de Jesus in the second round in August 2005.

"When I look back at my journey, I see that nothing has been in vain," said Silva in a press release. "I am extremely happy for the opportunity to test my boxing skills with Julio César Chávez Jr. I train continuously, always am striving for resilience and to overcome obstacles. Fighting is my everlasting breath."

After embarrassing losses to Daniel Jacobs and Mario Abel Cazares, Chavez rebounded in November with a fourth-round TKO win over Jeyson Minda. Chavez proclaims the win has made him put a new focus on the sport.

"I have rededicated myself to the sport I love, and I will be ready to face anyone in the Light Heavyweight division starting with Silva," said Chavez. "I will be prepared to be victorious on June 19th."

It's hard to expect what will happen once the bell rings. Does Silva have anything left in the gas tank? Can Chavez show that he actually cares about boxing?

Here is everything you need to know about Julio Cesar Chavez Jr. vs. Anderson Silva.

The Chavez vs. Silva main card pay-per-view kicks off at 9 p.m. ET/2 a.m. BST on Saturday night. Chavez and Silva are expected to make their ring walks at approximately 11:30 p.m. ET/4:30 a.m. BST, although that depends on the length of the earlier fights.

Boxing fans can watch Chavez vs. Silva via pay-per-view, which costs $39.99. It can be ordered and streamed through Fite.TV. Check Fite.TV for any geographical restrictions in your country.