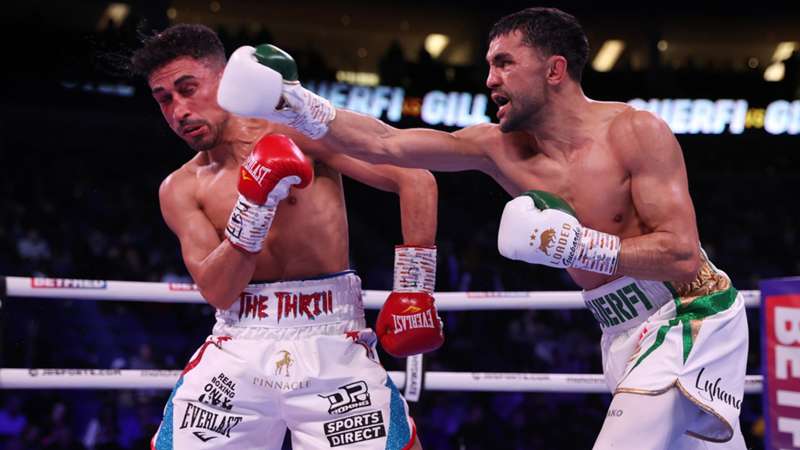 Re-watch the entire show on DAZN (except AUS & NZ)

Jordan Gill knocked out Karim Guerfi in round nine to claim the European Featherweight title.

Jordan Gill's knockout win over Karim Guerfi for the European Featherweight title stole the show at the O2 Arena on Sunday night.

Before the ninth round, it looked like Gill was set for a tough night against the Frenchman.

Following a poor start, Gill got into a rhythm before the defending European Featherweight champion stepped up his attack in round six.

Gill was knocked down in round seven before being the victim of the 'DDT' wrestling from Guerfi which prompted some concern from DAZN co-commentator Andy Lee.

OUCH. A big coming together results in a painful looking fall 😲#OkolieCieslak pic.twitter.com/vLrKrJTi1D

Looking unsteady on his legs, Gill was backed up into his own corner and subject to a constant barrage from Guerfi.

Gill showed tremendous heart and determination, and this paid off with a right hand in round nine which knocked Guerfi out cold.

Before this fight, Jordan Gill was a name not known amongst the wider boxing public, but one DDT and one right hand later, the newly crowned European Featherweight champion is the talk of British fight fans following an intense battle under the lights on the banks of the River Thames.