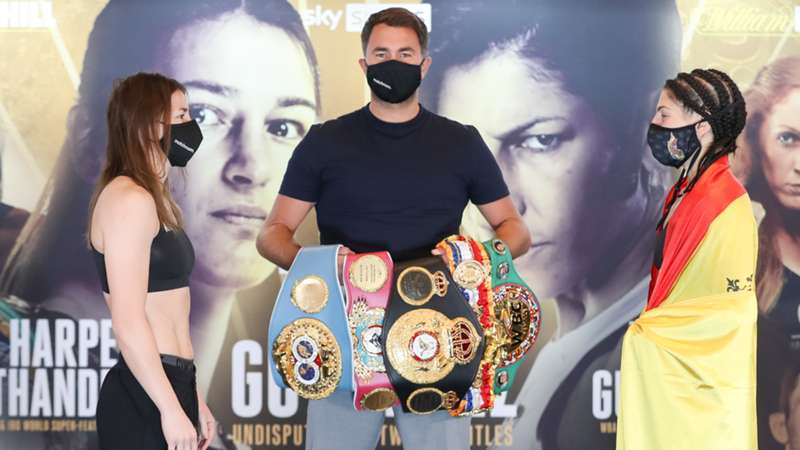 It's a triple-header of women's world championship boxing.

Katie Taylor headlines a historic triple-header of women's world title fights on Nov. 14, live on Sky Sports in the U.K. and Ireland, and DAZN in all nine DAZN regions including the U.S.

Irish star Taylor defends her undisputed world lightweight titles against Miriam Gutierrez, while WBC and IBO super-featherweight champion Terri Harper faces the challenge of Katharina Thanderz in chief support and Rachel Ball battles Jorgelina Guanini for the vacant interim WBC super-bantamweight strap on the first boxing card to ever be topped by a 1-2-3 of women's world championship action.

"I'm delighted to be headlining another fight night on Sky Sports," said Taylor. "When I turned professional, it was a bit of a step into the unknown in terms of how it all would go so to have these opportunities to headline cards is something I never take for granted.

"It's been a pretty quick turnaround from my last fight but I'm always looking towards the next challenge and I really wanted to fight again before the end of the year. The pandemic has obviously made it a very uncertain time in terms of scheduling fights so I'm really excited to have a date to focus on."

When Katie Taylor defends her belts on Saturday, it will be her 11th fight in a 1,113 day span, all world title fights. 🏆 pic.twitter.com/8Ng4o2RRkb

Gutierrez is Taylor's mandatory challenger after the champ won her rematch against Delfine Persoon in August.

"I am very happy, eager and excited. I am preparing myself 100 per cent for this fight with Katie. This is the great challenge that I have pursued in my sports career, to be able to fight for the undisputed crown."

Another eye-catching women's fight during the month-long Matchroom Fight Camp in August was Harper's exciting draw against Natasha Jonas. Thanderz is her next challenge.

"This is the most excited I've been for a fight, I feel like I've got a lot to prove," said Harper. "We've had the opportunity in this camp to work on lots of new things, having a strength and conditioning coach join the team. I want to go out and put the wrongs right."

"It's an amazing feeling to know that I'm finally fighting for the world title," said Thanderz.

"I've been waiting such a long time for this moment, and I just know I'll give my everything to win the title. Harper is a young and talented fighter.

"I think she's a very hard-working girl. She's fast, she has a good technique, she has stamina, and she's a very good fighter. It will a pleasure to share the ring with her."

The triple-header, with Taylor vs. Gutierrez in the main event, begins its live televised coverage from 7 p.m. GMT/2 p.m. ET. Ring walks for the Taylor fight are expected around 10 p.m. GMT/5 p.m. ET, though the exact time depends on how long the undercard runs.

In the U.K. and Ireland, viewers can watch on the Sky Sports Arena channel or via the Sky Go app, as well as the broadcaster’s YouTube and Facebook channels and skysports.com.

The card will air in the United States on DAZN, as well as in all of the other eight DAZN teritories. (Click here to find out more about DAZN.)

Where is the Taylor vs. Gutierrez fight?

The card will be staged at the SSE Arena in Wembley, part of a series of fights agreed by Matchroom Boxing with the venue. The cards will be held within a "bubble", fully compliant with COVID-19 safety protocol, and tickets will not be made available to the general public.