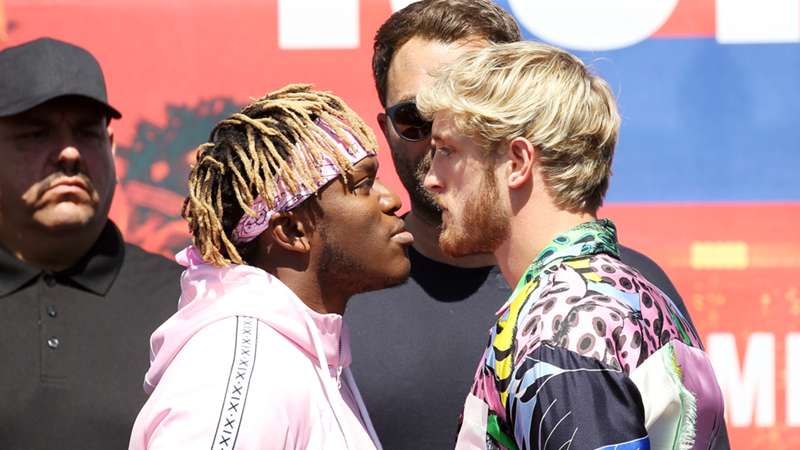 KSI and Logan Paul did what they do best Saturday: entertain.

In a press conference held outside Los Angeles' Staples Center, the home for their boxing rematch on Nov. 9, the YouTube personalities went after one another with verbal attacks. Promoter Eddie Hearn sat back and watched as KSI and Paul put on a show.

Paul had the first opportunity to speak, and he went for the personal attacks early. Paul referenced KSI's brother, Deji, who fought Paul's brother, Jake, on the undercard of the initial fight. KSI, whose real name is JJ Olatunji, and Deji have had a falling out after Deji accused KSI of physically and emotionally abusing him since they began making videos together in 2012.

Deji also claimed KSI hit his mother, which is something KSI emphatically denied. This was a public spat, and Paul used the information to his advantage early in the press conference Saturday.

"Your brother doesn't like you," Paul said. "Where's Deji at? Where the f— is Deji at? Where's your family at? Last time I remember, you were hitting your mom on Christmas and you got kicked out of the house for that."

Once KSI got his turn, he turned to personal attacks as well. KSI brought up the fact Paul's dog, Kong, was killed by a coyote back in April.

Paul responded, "That was f—ed up. You ruined my day."

well. rest in peace you little inbred. you little golden puffle poof. your tongue will forever be long & bountiful ... my son @kongdasavage was taken by a coyote last night from our front yard. despite his savagery, he didn’t stand a chance. fuck. i’ll miss his mindless, empty stares. his incessant 7am barking. his urine stains on my chestnut floors. you’ve made your dent in this universe and i wouldn’t have expected you to go any other way... love you @kongdasavage god damnit. im coming for you yotes heed my words.

The two went on talking back and forth to one another for a few more minutes before eventually calming down.

When Hearn asked for their predictions, they both said they were going to knock the other out. Paul claimed he was going to do it in the first round. The two went face to face at the end of the event, with Paul offering a light shove to get KSI off him.

KSI and Paul's first fight ended in a majority draw. The bout was streamed on YouTube with more than 1 million pay-per-view buys and held in a sold-out Manchester Arena in England. The rematch will be much different, however; KSI and Paul will not be wearing headgear this time.

Their November fight will be streamed exclusively on DAZN.