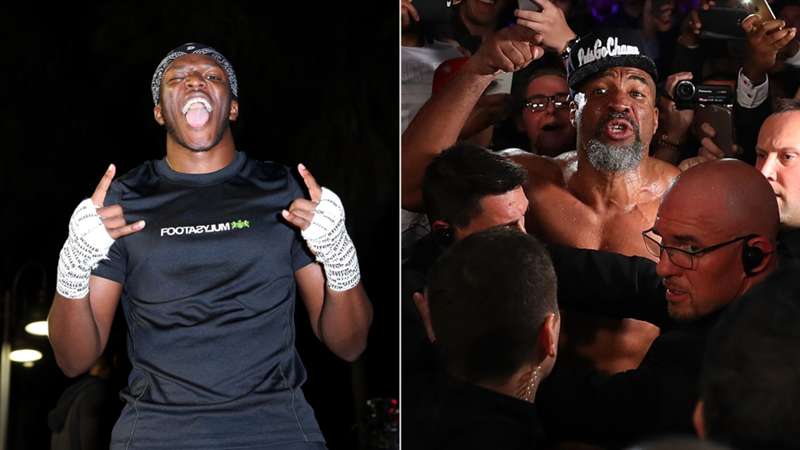 KSI suggests that Shannon Briggs has more interest in marketing himself rather than train Logan Paul after an altercation briefly turned physical at an open workout in Venice Beach.

LOS ANGELES — Logan Paul and Olajide “KSI” Olatunji have had a heated rivalry that will culminate inside of a boxing ring when the YouTube stars clash in a professional boxing match on Saturday, Nov. 9 at Staples Center.

For months, the two have traded barbs and expressed their dislike for each another. But at a public workout in Venice Beach on Tuesday, former heavyweight champion Shannon Briggs injected himself into the feud.

Briggs, who is the head trainer for Logan Paul, engaged in a shouting match with KSI as Paul’s workout commenced. Briggs trash-talked the 26-year-old and boasted that his charge would turn the lights out on KSI this weekend. What appeared to be a war of words nearly turned physical as the 47-year-old shoved KSI’s bodyguard, which led to security stepping in to pull the two sides apart.

Shannon Briggs is out here trying to put hands on all of @KSIOlajidebt ’s team pic.twitter.com/NK0dmzH10q

KSI spoke to DAZN about the incident on Wednesday and went as far as suggesting that Briggs was nothing more than a glorified hype man who is using Paul to make a name for himself.

“He’s an idiot and a clout chaser,” KSI said when discussing the incident. “He just wants to get as many followers as he possibly can. He doesn’t care about Logan Paul.”

Asked if he believes that Paul and Briggs are strategizing to get into his head, the YouTube star replied in the affirmative.

“Absolutely, but I know what they are doing,” he said. “I don’t get emotional because then you don’t think rationally, and everything you planned for goes out of the window. I’m going to be calm, cool and collected.”

KSI has been steadfast that he’s made drastic improvements since their first meeting in 2018, which ended in a draw. In that battle, the fighters wore headgear. This time, there will be nothing to shield the blow between a gloved hand and their face.

“I’ve watched that first fight so many times to the point where I’ve studied every single frame and can tell you how many punches I threw,” he said. “I know what I did wrong, and we’ve worked hard at fixing that. As for him, I don’t think he’s going to be any different in the ring. Shannon hasn’t taught him anything, and when he realizes that I’m a completely different animal, he’s not going to know what to do.”

Despite what some skeptics have said about this fight being a “farce,” KSI promises that he’s taking it seriously. As are his fans, who are expected to turn out in massive numbers to watch the showdown.

Although he’s unsure just how many fans will be cheering for him inside of Staples Center, the one thing he does know is that Paul won’t be able to deal with what he plans to bring inside of the boxing ring Saturday night.