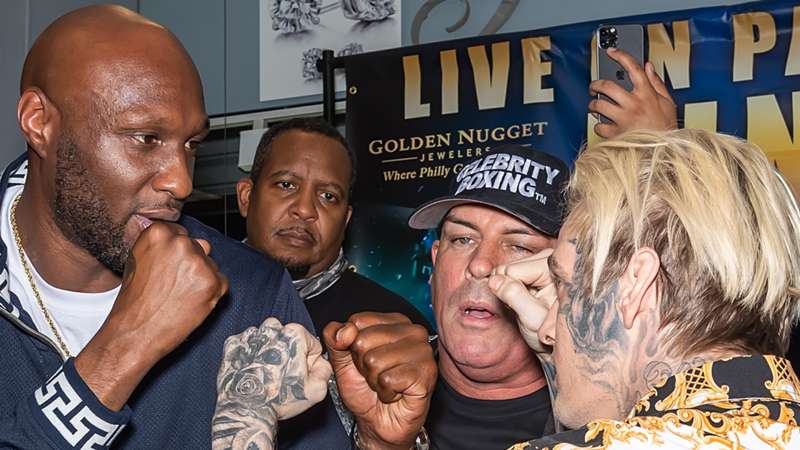 The former NBA star just overpowered the pop star of the 90s in Atlantic City, New Jersey on Friday night.

Despite giving up 10 inches in height, 64.5 pounds and 11 inches in reach to Odom, Carter enjoyed early success with a barrage of lefts and rights that connected to his taller, larger opponent's head in the opening round. However, Odom got his bearings, went to the outside and placed a right jab-left hook combination, which dropped Carter. The pop star of the 90s didn't have his legs under him and wisely held on to survive the round.

But he wouldn't make it against Odom much longer. The second round had Odom spinning Carter around and around, before delivering several unanswered lefts to drop the singer once again. Special guest referee Chuck Liddell began counting, as Carter indicated that he was no longer fit to continue.

Aaron Carter wants no more! Lamar Odom wins in the second round of our #CelebrityBoxing Main Event!

"Like a f—ing train," Carter said live on the pay-per-view in describing what it felt like to be hit by Odom. "He hits like a mule."

Carter is fortunate to not leave the ring seriously hurt, as giving up nearly 65 pounds in a fight is a huge deal and something that organizers should be leery about with these celebrity boxing bouts in the future.

facebook twitter whatsapp
Odom jabbing Carter, who gets spun around. He's also spinning around voluntarily, wild and out of control ... kind of like this celebrity boxing match as a whole. Liddell calls time and is giving Carter a quick warning. Repeated, unanswered lefts drop Carter yet again. He's shaking his head 'no' on one knee as Liddell counts. As Liddell hits seven and then eight on the count, Carter tells him he's quitting. It's over!

facebook twitter whatsapp
Odom coming out trying to assert the jab. Now Carter gets inside and is tagging Odom with rights and lefts to the head. Wow. He's trying to chop down Odom. The former NBA star gets back to the outside and nails Carter with a right jab and left hook that drops the singer/songwriter. Carter doesn't have his legs. He clinches and survives the round.

The size difference is glaring

Carter giving up almost a foot in height and 64.5 pounds to the former two-time NBA world champion Odom. Welp. Let's see how this one goes.

Lamar Odom and Aaron Carter are in the ring!

The former pop star of the 90s is here.

...And here comes his opponent, Singer, and songwriter, @aaroncarter!

Who will win, Aaron Carter or Lamar Odom?

His 6-10 frame making a slow, confident stroll to the ring.

facebook twitter whatsapp
Welcome to the live coverage for what should be a very unusual celebrity boxing match. "The Iceman" Chuck Liddell is in the ring ready for his special guest referee duties.