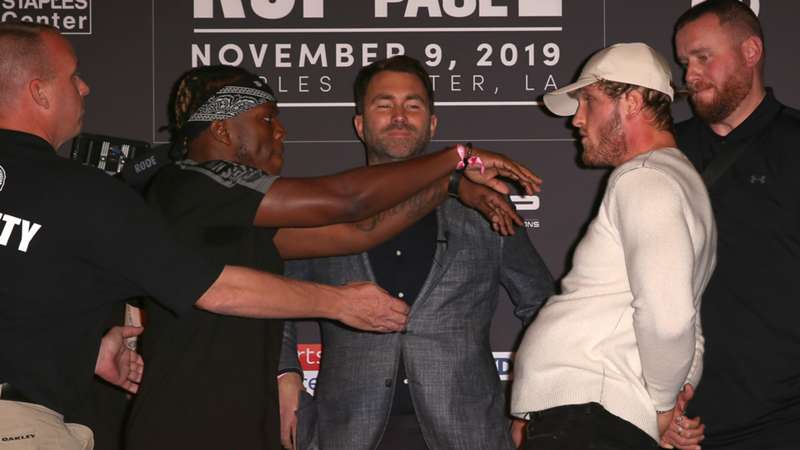 Logan Paul spent much of Thursday's press conference asking KSI, who he'll face Saturday at Staples Center in each of their professional boxing debuts, live on DAZN, to answer math questions.

The quiz was a response to KSI trying to get Paul to prove his boxing knowledge, asking him to name some of Muhammad Ali's opponents. No word on whether being mentioned at the spectacle had an effect on the late Ali's rotational energy.

Neither YouTuber answered the others' questions.

When they weren't quizzing each other on boxing or math, KSI and Paul spent plenty of time boasting who was the better fighter, with Paul saying KSI would "suffer some severe health repercussions," and KSI telling Paul "I'm ready to f— you up."

The press conference also had a physical confrontation, when KSI shoved Paul as they faced off.

It was all part of the build-up to the rematch between the two social media stars. KSI had gotten into a shouting match with Paul's trainer, Shannon Briggs, at the public workouts earlier in the week, and called Briggs an "idiot and a clout chaser." Paul and KSI even released dueling documentaries, as part of DAZN's "40 Days" series.

The first bout between the two, in August 2018, ended in a majority draw. The rematch is Saturday, and this time they'll be without the head guards and using 10-ounce gloves. It's part of what should be a memorable night, with a full countdown show, and separate bouts featuring WBO super middleweight champ Billy Joe Saunders and WBC lightweight champ Devin Haney.